The climate ambulance chasers will be out in full force, calling for global communism when the longest drought of category 3+ landfall Atlantic/Gulf coast hurricanes in recorded history breaks. It’s now been a record 11 years since “Wilma” (2005).

Localised low pressure weather systems, like Louisiana and “Sandy” will have to suffice for the climate alarmist industry, until a decent hurricane eventually arrives.

Is man-made global warming to blame for the heavy rainfall and flooding in Louisiana? Former Vice President Al Gore sure thinks so.

And The New York Times ran a story with the title “Flooding in the South Looks a Lot Like Climate Change.” But the climate research suggests otherwise.

Speaking in Houston to train more grassroots activists on global warming, Gore said: “These kinds of record downpours—that’s one of the manifestations of the climate crisis.”

The Times article led with: “Climate change is never going to announce itself by name. But this is what we should expect it to look like.” 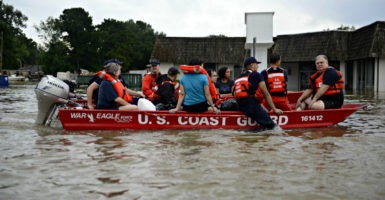 Torrential rain and severe flooding tragically claimed at least 11 lives in southern Louisiana and affected more than 40,000 homes. Emergency responders and other volunteers

The Democrat’s foolish War on Climate

“Not only is mobilization horrendous, there is no scientific justification for it. It is now clear that what is called “lukewarming” is probably the correct scientific view. Human activity may be causing a modest global warming that is actually beneficial. Beyond that climate change is natural and so beyond human control.

“The only purpose for which a war on climate makes sense is justifying a massive increase in government power.

“If the Democrats are in fact serious, then we are talking about central economic planning on a massive scale, imposing great sacrifices on Americans, all in the futile name of stopping climate change. Sacrifice is harmful in its own right so this raises a host of moral issues. Which immediate harms will be deemed less harmful than speculative future climate change? Medical care is now a major sector of the economy, will it be curtailed? Will poverty be left to languish, or even encouraged via wage controls? Will travel be forbidden? Unfortunately the platform gives no clue, so this should be a major election issue.”

Important read. Thanks Judith and David.

The party platform adopted at the Democratic National Convention, on page 45, calls for a national mobilization on the scale of World War II. What enemy deserves the wrath endured by Hirohito and Hitler? Climate change! Democrats want to declare a war on climate.

More billions of dollars of taxpayers money funnelled to the “0.1%” green-corparitists, in the form of government subsidies, to make another feel-good green fantasy viable.

Deepwater Wind LLC is on the verge of completing the first offshore wind farm in U.S. waters, a milestone for an industry that has struggled for a more than decade to build in North America.

Workers have installed blades on four of the five 589-foot turbines at the site off the coast of Rhode Island and construction may be complete as early as this week, according to Chief Executive Officer Jeff Grybowski. The 30-megawatt, $300 million project is expected to begin commercial operation in early November.

“We will finish in advance of our original schedule,” Grybowski said in an interview at a dock on Block Island. “And we are in-line with our budget.”

After years of false starts, the offshore wind industry appears to be gaining momentum in the U.S. The federal government has awarded 11 leases to companies to develop projects along the East…

How Green Energy Hurts the Poor…

“…renewable energy can’t fill that void any time soon. Despite receiving tens of billions of dollars in subsidies, wind and solar still generate less than 6 percent of the nation’s electricity and remain undependable sources of electricity generation.

“Purposefully driving up the cost of energy, while millions of Americans already struggle to pay their utility bills, is irresponsible. We cannot cut the world’s carbon emissions alone, but we can certainly make U.S. energy poverty a full-blown crisis if we continue on our current course.”

“Show this to some idiot Internet heckler the next time you are accused of “being in the pay of big oil” for having an opinion on climate.”

Gov. Jerry Brown talks with Richard Alley (who was about to give a climate doom talk) just feet away from me. At AGU 13. If I knew then what I know now, I would have called him out personally right then and there.

From the “color of political slimebags is green” department. Note to readers: Show this to some idiot Internet heckler the next time you are accused of “being in the pay of big oil” for having an opinion on climate.

Here are two instances worth noting, but there are plenty more:

“This sort of deception isn’t a complete surprise, though, given the questionable study published last year by the National Oceanic and Atmospheric Administration (NOAA) [Karl et al].
But it reveals the degree to which academic and government elites will pursue their own agenda at the expense of institutional honesty.” – Climate Change Dispatch

Lots of buzz over Brian Cox using the latest GISS land and ocean graph to put down Malcom Roberts in a TV debate in Australia. Likely we will be seeing the image everywhere and alarmists crowing about “deniers” dismissed once and for all. For the record here is the graph showing no pause whatsoever:

This is accomplished by lowering the 1998 El Nino spike relative to 2015 El Nino. To see what is going on, here is a helpful chart from Dr. Ole Humlum at Climate4you

It shows that indeed, GISS is showing 1998 peak lower than several years since, especially 2002, 2010 and 2016. In contrast, the satellite record is dominated by 1998, and may still be in that position once El Nino takes hold later this year. The differences arise because of satellites measuring air temperature in the lower troposphere, while GISS combines records from land stations with…