Paris COP21 : Much that passes as idealism is disguised hatred or disguised love of power

The (now standard) violence perpetrated by Climate Change activists at the UN’s latest climate boondoggle in Paris, is further proof that Left-wing ideology is the natural home of the barbarian.

The mob violence and vicious hatred of the modern Leftist (Climate activist) exposes the sham behind such preachers of peace, tolerance and ‘climate justice’.

Much that passes as idealism is disguised hatred or disguised love of power.

A frightening thought is that these Leftist ‘ideologues’ are of the very same tribe that we are to entrust with global energy policy.

France puts global warming alarmists under house arrest, having worked out that they’re actually a menace. Just 24 so far, but it’s a start:

Green groups have described the move as “an abuse of power” but the French Interior Minister Bernard Cazeneuve said the activists were suspected of planning violent protests.

They must remain in their home towns, report to the local police three times a day and abide by a nightly curfew until December 12, when the climate change conference winds up.

Global warming protesters in Paris show their commitment to a better word by trying to smash police with rocks:

Paris gets the party started #COP21

The latest last chance to save the world has begun, with just 200+ arrests so far.

Here we go again, the biggest names in the political and climate world are gathering to pretend that they are intent on saving the world again. Quite simply the Oscars of virtue signalling.

Yet its is (almost) set in stone that this conference is set to fail in its primary objective. That is, to force rich countries to quietly destroy their economies and for the poor economies, with the highest death rates, to reject energy & prosperity.

The Pointman has delved into the details of the Bonn preconference conference and assures us this event is set to fail. Meanwhile there is a timely reminder in a guest post at Bishop Hill on the genuine problem of extreme poverty.

What sets COP events out from the rest is of course the side events, the preening, posing, tears and tantrums. We’ve already had #birthmark. Useful idiots tattooing the CO2ppm of their brithday. #Climatemarch, Some people, led by famous people, waving banners demanding: blue sky, stop climate change, stop sea level rise…. Professor Michael Asten urges calm – and a bit of honesty in the warming debate :

UN climate agency is exaggerating the effects of El Nino

The UN climate agency, the World Meteorological Organisation, has predictably hyped the global warming associated with this El Nino to encourage political leaders to action in next week’s Paris climate conference (”UN tips 2015 as hottest year”, 26/11).

However, its press release overlooks the full WMO discussion which notes that this El Nino is similar to three significant events in 1972-73, 1982-83 and 1997-98. It is not an unprecedented event, and past experience shows that prediction of the progress of El Ninos is notoriously difficult. The WMO quotes only surface temperature data, which may be subject to upward biases from meteorological stations sited in cities and ships that are thermal sources. The two data sets of lower atmosphere temperatures as measured globally using weather balloons and satellites were not used by the WMO, but they show a less alarming result — there is no upward statistical trend in global temperatures over the past 18 years, a feature much discussed in scientific journals as “the pause”.

Empirical scientists should be alarmed that while the most commonly quoted climate models predict a global temperature increase of 3C per century over this time, it is not happening. Rather than being panicked by the WMO press release, Malcolm Turnbull and Greg Hunt and their opposite numbers represented in Paris would serve us well by pausing their deliberations until science delivers a global temperature model consistent with measurement.

Australia’s premier scientific body and hotbed of climate alarmism, the CSIRO, conducted a similar study with similar results, concluding that global warming ‘believers’ are now in the minority.
https://climatism.wordpress.com/2015/11/04/csiro-most-australians-are-now-global-warming-sceptics/

Fascinating and heartening results considering the bombardment of largely uncontested climate alarmism and breathtaking propaganda that has been hammered out across the mainstream media for years. 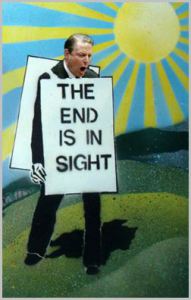 But not the end he was thinking of ? [credit: wizbangblog.com]
Are prophets of climate doom going out of fashion? The BBC fears so.

Public support for a strong global deal on climate change has declined, according to a poll carried out in 20 countries. Only four now have majorities in favour of their governments setting ambitious targets at a global conference in Paris.

In a similar poll before the Copenhagen meeting in 2009, eight countries had majorities favouring tough action. The poll has been provided to the BBC by research group GlobeScan.

Just under half of all those surveyed viewed climate change as a “very serious” problem this year, compared with 63% in 2009.

‘Green’ energy – wrecking the environment (and people’s lives) to save it.

No, that wasn’t a ‘dream’ – it’s an unvarnished nightmare.

The state of California has embarked on a 25-year green power odyssey in an effort to reduce the amount of CO2 we place into the atmosphere, all aimed at leading the world in an anti-climate change crusade for humanity.

Beginning in 2030, 50 percent of all electrical power produced for our regulated utilities will be mandated “renewable” energy. This definition under the current law includes energy from solar, wind and small hydroelectric facilities built, or to be built, over that time frame. It excludes residential solar installations and existing large hydroelectric projects such as energy produced from Hoover Dam.

While some of this new power will be “infill” development (smaller solar projects that may be placed in vacant or brown-field urban areas), most of it…

The nefarious intent of NASA/GISS temperature adjustments is no more evident than when dealing with UHI (Urban Heat Island effect).

In every case I’ve seen, there is a consistent pattern of adjusting temperatures ‘up’, in the latter half of 20th century, as cities artificially warm with infrastructure growth, rather than adjusting them ‘down’ to compensate for this well known UHI effect.

This inverse UHI logic, leading to an increase of late 20th century temperatures, is further compounded by massively adjusting mid-century (1940’s-1960’s) temperatures ‘down’!

Cooling the past and warming the present, to fit the ‘global warming’ narrative.

This is scientific fraud and it-is-a-crime.

There are only ten GHCN stations currently operating in South Africa, and only one of these, Calvinia, is classified by GISS as rural. It has a population of 9000, and is situated inland in the Northern Cape province.

This is the actual temperature trend at Calvinia, based on GHCN V2 raw data in 2011.

There has been no warming since the start of the record. Yet the current version of GISS, which is based on adjusted GHCN data, has miraculously morphed into a sharply rising trend.

So, what about the other nine sites? We have three with…