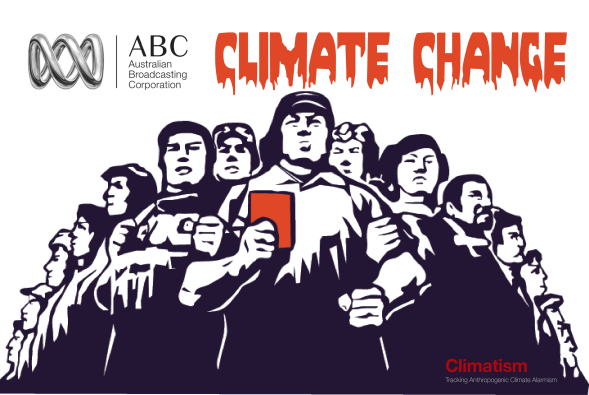 THIS particular weather report that had to inconveniently divulge extreme cold temps that have kicked off Australia’s colder than average start to winter would make even infamous NAZI propagandist Joseph Goebbels blush!

Andrew Bolt with the rub…

So he breaks off to sternly lecture any backsliders:

“Global warming doesn’t mean that cold temperatures won’t be recorded but rather that record heat temperatures will be far more common.”

“Now on a quick side note, though, Global warming doesn’t mean that cold temperatures won’t be recorded, rather, record heat temperatures will be far more common and widespread.”

THIS statement is yet another ABC climate change falsehood!

However, according to GHCN and ACORN-SAT (‘adjusted’ data), the Australian temperature anomaly is, yes, increasing, but this is due to nighttime temps increasing faster than daytime temps are declining… 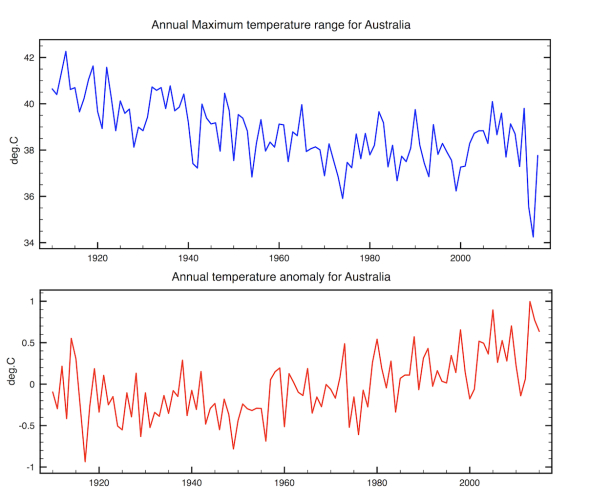 UHI caused by urban sprawl appears to be the most likely reason for nighttime temps up, IMO. (See link for Urban versus Rural temps station data… NO Australian Under The Age Of 40 Has Experienced Any Global Warming | Climatism)

MEANWHILE, according to the much more comprehensive and accurate NASA satellite temps, unpolluted by land-based UHI (Urban Heat Island effect)…

ACCORDING to NASA’s MSU satellite data, there has been no warming, at all, over the continent of Australia since the record began 40 years ago…

The ABC will fight to the last to protect the warmist faith it has pushed and exaggerated and hyped and defended for years with a truly manic energy.

“This planet is on course for a catastrophe.
The existence of Life itself is at stake.”
– Dr Tim Flannery
Climate Council

TIM FLANNERY, former Climate Commissioner of Australia from 2011-2013 earned $180,000 per year for a three-day working week to make predictions and decisions that affected billions upon billions of dollars of Australian taxpayers’ money.

AFTER being rightly sacked by the Abbott government in 2013, Flannery began his own go-fund-me version of the Climate Commission, the Climate Council, which continues the propagandised rollout of catastrophic climate predictions and unreliable-energy pipe dreams.

NEVER far from the government teat, Flannery is regularly wheeled out by Australia’s government run media monolith their ABC, appearing as resident climate ‘expert’ whenever a catastrophic weather event hits the news cycle, or simply to inject a dose of hysteria into the conversation when climate alarm is waning.

TO understand why the ABC and Q&A are so ‘impressed’ by the former ‘Australian of the year’, let’s take a brief look at Flannery’s impressive career of climate predictions and prognostications…

“I think there is a fair chance Perth will be the 21st century’s first ghost metropolis. It’s whole primary production is in dire straits and the eastern states are only 30 years behind.”

We are “one of the most physically vulnerable people on the Earth,” and “southern Australia is going to be impacted very severely and very detrimentally by global climate change.” We are going to experience “conditions not seen in 40 million years.”

“…That’s because the soil is warmer because of global warming and the plants are under more stress and therefore using more moisture. So even the rain that falls isn’t actually going to fill our dams and our river systems, and that’s a real worry for the people in the bush. If that trend continues then I think we’re going to have serious problems, particularly for irrigation.”

“The one-in-1000-years drought is, in fact, Australia’s manifestation of the global fingerprint of drought caused by climate change.”

“Brisbane and Adelaide – home to a combined total of three million people – could run out of water by year’s end;”

and that the country was facing

“the most extreme and the most dangerous situation arising from climate change facing any country in the world right now.”

“Over the past 50 years southern Australia has lost about 20 per cent of its rainfall, and one cause is almost certainly global warming. Similar losses have been experienced in eastern Australia, and although the science is less certain it is probable that global warming is behind these losses too. But by far the most dangerous trend is the decline in the flow of Australian rivers: it has fallen by around 70 per cent in recent decades, so dams no longer fill even when it does rain …

In Adelaide, Sydney and Brisbane, water supplies are so low they need desalinated water urgently, possibly in as little as 18 months.”

“The water problem is so severe for Adelaide that it may run out of water by early 2009.”

AND then the rains came, as they always do in the land of “droughts and flooding rains“…

BY 2009 dams for Brisbane, Canberra and Sydney were filled to overflowing.

“Sadly we’re more likely to see them more frequently in the future.”.

A year later, not one severe cyclone was recorded, continuing the downward trend in severity and frequency of tropical cyclones, despite rising CO2/temps… 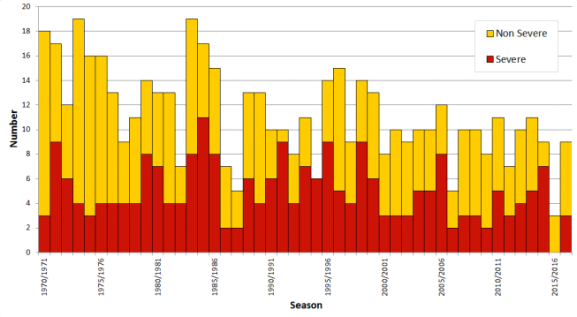 “Studies project a decrease in the frequency of tropical cyclones towards the end of the 21st century in the southwest Pacific, southern Indian, and Australian regions.”

Australian tropical cyclone activity lower than at any time over the past 550–1,500 years | Nature

MINIMUM Arctic sea-ice extent has been trending up over the past decade, and is most definitely not “ice-free”! The EXACT opposite of what Flannery, the press and ‘97% experts’ have been telling you :

ARCTIC minimum sea-ice volume has been increasing since 2007 :