PLANDEMIC (Pt. 1) is a must watch. It exposes the scientific and political elite who run the scam that is our global health system.

ABOUT THE FILM : Humanity is imprisoned by a killer pandemic. People are being arrested for surfing in the ocean and meditating in nature. Nations are collapsing. Hungry citizens are rioting for food. The media has generated so much confusion and fear that people are begging for salvation in a syringe. Billionaire patent owners are pushing for globally mandated vaccines. Anyone who refuses to be injected with experimental poisons will be prohibited from travel, education and work. No, this is not a synopsis for a new horror movie. This is our current reality.

THE YouTube censors have been at it again. The gatekeepers of free speech have taken down the original Plandemic Movie cut to YouTube…

Plandemic video has been taken down by YouTube and their little robotic censors. I am so done with YouTube! I hope people leave that platform in droves but the fact that they removed it gives the video even more credibility, of which YouTube is devoid. I’ll find it somewhere else and post the link everywhere!

MEANWHILE, you can see the original version from the PlandemicMovie website in Vimeo format. Click image to take you there…

In an effort to bypass the gatekeepers of free speech, we invite you to download this interview by simply clicking the button below, then uploading directly to all of your favorite platforms.

UNREAL! The original video, featured on the official and ‘private’ site of “Plandemic Movie” has now been banned/censored!

THE Ministry of Truth is now in full damage control mode.

WELCOME to 1984, ladies and gents. Scary times. Thought, debate and enquiry – the benchmarks of SCIENCE – are now borderline illegal.

FOR the latest AU government information on COVID19 :

NEED to speak to someone?

“IT would not be impossible to prove with sufficient repetition and a psychological understanding of the people concerned that a square is in fact a circle. They are mere words, and words can be molded until they clothe ideas and disguise.”
― Joseph Goebbels

THE Left and the Deep State’s favourite conspiracy theory is dead!

THE 30 MILLION dollar, 675 day “Russia Collusion” probe has finally ended with the Mueller Report on “Trump Russia Collusion” handed in to the US Department Of Justice with, importantly, no further indictments recommended by the Special Counsel.

Special Counsel Robert Mueller is not recommending any further indictments as part of his sweeping Russia investigation which effectively ended Friday, according to a senior Justice Department official.

NOT a single American citizen or anyone associated with the Trump campaign has been charged with anything related to Russian collusion or obstruction of justice.

SO many lives trashed, the Republic and the Presidency weakened.

CONGRESSMAN Mark Meadows sums it up :

THERE must be consequences for both the Leftist mainstream media and government bureaucracy so that the most powerful organs of State – the FBI and CIA – can never again be used as weapons against a political opponent or citizens.

LAURA Ingraham on holding the media accountable for frenzy over Mueller :

AS Climatism is a climate-related blog, we don’t usually stray outside of issues relating to weather and climate. However, there are many parallels between the Trump Russia hoax and Climate Change alarmism in how the mainstream media, by completely giving up journalistic endeavour, has the power and ability to spread propaganda and misinformation in order to push their favourite pet theories.

IF the mainstream media can make you believe that @realDonaldTrump was a “Russian Agent”, imagine what they can do to make you ‘believe’ that mankind’s one extra CO2 molecule in 10,000, added since 1950, is destroying the planet?! 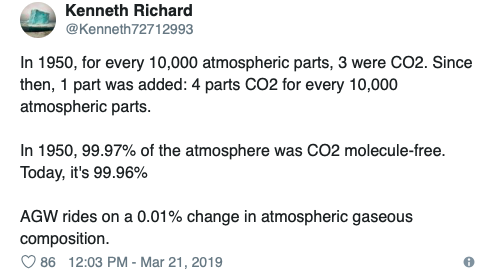 MOTHER NATURE produces 97% of all #CarbonDioxide emissions. Mankind about 3%.
AT what point do we call #MotherNature a “climate denier” and charge her a #CarbonTAX? #ClimateChange #CO2 #Hoax #GreenNewDisaster 🍉 pic.twitter.com/gKqLMmgcRM

THE MAINSTREAM MEDIA’S DERELICTION OF DUTY

A February 2018 headline from the fake newspaper that has lead the charge against Trump, provides a glimpse of the constant visceral hatred directed at the person who beat Hillary…

NOTE The banner and new slogan of the Washington Post – “Democracy Dies in Darkness.”. You be the judge as to the veracity of their pompous claim after today’s release!