THE Death Of A Climate Icon: The Video

“THIS is a lesson for researches in other areas who have failed to stop the invasion of politics into their science.” – Dr Susan Crockford

Two years old today, this polar bear video is more relevant than ever:

“The polar bear as an icon for climate change is dead because the distorted predictions made by polar bear specialists were wrong.”

DIRE predictions of an “ice-free” Arctic have remained popular on the climate change, fear-mongering circuit for many years now.

BUT, how ‘bad’ really are Arctic sea-ice conditions, in mid-summer, circa 2019?

ACCORDING to this latest piece of anecdotal (real-world) evidence, Arctic “Death Spiral” enthusiasts would be understandably disappointed!

“…what we saw was indeed really impressive sea ice. In fact, the sea ice we encountered was thick enough that reaching our destination—the geographic North Pole—took roughly 1.5 days longer than we’d expected.”

In late June, one of the most powerful icebreakers in the world encountered such extraordinarily thick ice on-route to the North Pole (with a polar bear specialist and deep-pocketed, Attenborough-class tourists onboard) that it took a day and a half longer than expected to get there. A few weeks later, in mid-July, a Norwegian icebreaker also bound for the North Pole (with scientific researchers on board) was forced to turn back north of Svalbard when it unexpectedly encountered impenetrable pack ice.

A polar bear on hummocked sea ice in Franz Josef Land. Photo by Michael Hambrey, date not specified but estimated based on tour dates to be 22 or 23 June 2019.

Apparently, the ice charts the Norwegian captain consulted showed ‘first year ice‘ – ice that formed the previous fall, defined as less than 2 m thick (6.6 ft) – which is often much broken…

IF #Netflix and #DavidAttenborough can so casually attribute “walrus suicide” to theorised man-made climate change, imagine what other falsehoods they are willing to tell you in order to push their ‘catastrophic’ climate narrative?

GREAT additional research, in search of the truth, once again, by Dr Crockford here…

I had an opportunity last night to watch the original Netflix ‘Frozen Worlds’ walrus episode and have some addition thoughts.

One big eye-opener was the final shot of the walrus sequence: a polar bear approaching from the water to feed on the carcasses below the cliff at Cape Kozhevnikov. This is additional proof that polar bears were in the area while the crew were filming. Yet the narrative in the film was silent on the risk to walruses on the cliff from polar bears and not a word was spoken of the hundreds of walruses that had fallen off that very cliff just days before after being spooked by approaching bears.

Oddly, I have also discovered that the Russian scientific advisor to the film, Anatoli Kochnev, wrote a scientific report in 2002 (translated into English) on walrus deaths at two regularly used beach haulouts on Wrangel Island from…

DEATH OF A CLIMATE ICON : A Lesson For Researchers In Other Areas Who Have Failed To Stop The Invasion Of Politics Into Their Science

THE polar bear as an icon for  Climate Change is dead, because the distorted predictions made by Polar Bear ‘specialists’ were wrong.

THIS is a lesson for researchers in other areas who have failed to stop the invasion of politics into their science.

TUCKER CARLSON interviews Zoologist and Polar Bear specialist Dr. Susan Crockford on the prime time ratings-killer show Tucker Carlson Tonight, in a must watch segment that demonstrates how “overpopulation”, not extinction, is now the problem :

THE Global Warming Policy Foundation has since released an excellent short video showing why the polar bear no longer serves as the icon of the climate change movement :

END_OF_DOCUMENT_TOKEN_TO_BE_REPLACED

DEAR Climate Change Alarmists, We Are Doing Just Fine Thanks, And So Is Our Sea-Ice! Regards, Polar Bears

POLAR BEARS – We Are Fine | CLIMATISM

“Inuit believe there are now so many bears that
public safety has become a major concern,”
– Nunavut’s polar bear population is unsafe,
government document says – The Globe and Mail

“Public safety concerns, combined with the effects of
polar bears on other species, suggest that
in many Nunavut communities, the polar bear
may have exceeded the co-existence threshold.”
– Nunavut’s polar bear population is unsafe,
government document says – The Globe and Mail

DIRE predictions of an “ice-free” Arctic have remained popular on the climate change fear-mongering circuit, owing to the psychological and political currency of all things melting and not least the emotional relevance applicable to the fate of the Arctic’s most famous resident and ‘global warming’ mascot – the polar bear.

SOME of the failed Arctic sea-ice predictions by alarmists ‘scientists’ and the fake news media over the years :

CURRENT STATE OF THE ARCTIC

MINIMUM sea-ice extent has been trending up over the past twelve years. The EXACT opposite of what the mainstream media and ‘97% experts’ have been telling you : 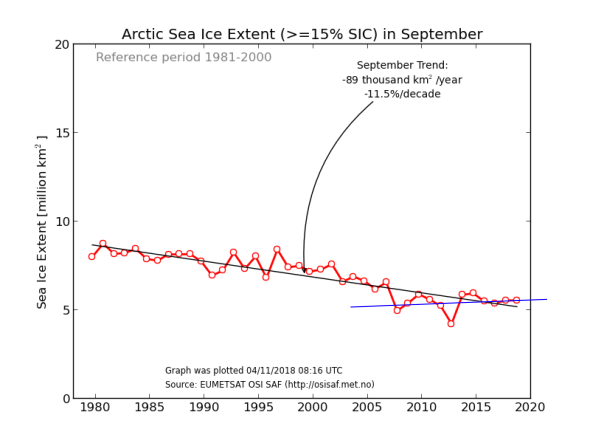 MINIMUM Arctic sea-ice volume has been rising, not declining, since 2007 : 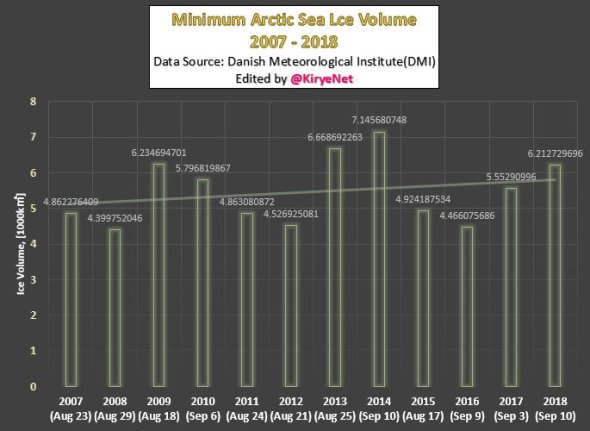 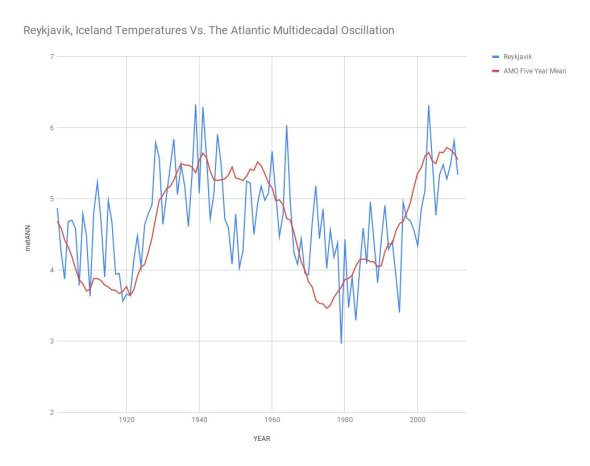 NO other icon of ‘Global Warming’ epitomises its very own false narrative like the polar bear does for ‘Climate Change’.

WITH deadly irony, polar bear numbers have grown dramatically as carbon dioxide emissions have risen in lock-step. A CO2 correlation, at last!

INDIGENOUS Inuit’s of Northern Canada are now facing the very real task of having to cull the population as “the polar bear may have exceeded the co-existence threshold.”

“Inuit believe there are now so many bears that public safety has become a major concern,”

“Public safety concerns, combined with the effects of polar bears on other species, suggest that in many Nunavut communities, the polar bear may have exceeded the co-existence threshold.”

Susan Crockford is zoologist with more than 35 years experience, including published work on the Holocene history of Arctic animals. She is currently an adjunct professor at the University of Victoria, British Columbia.

It’s long past time for polar bear specialists to stop holding out for a scientifically accurate global estimate that will never be achieved and determine a reasonable and credible ‘best guess’. Since they have so far refused to do this, I have done it for them. My extrapolated estimate of 39,000 (range 26,000-58,000) at 2018 is not only plausible but scientifically defensible.

In 2014, the chairman of the IUCN Polar Bear Specialist Group (PBSG) emailed me to say that their global population size number ‘has never been an estimate of total abundance in a scientific sense, but simply a qualified guess given to satisfy public demand.’

In my new book, The Polar Bear Catastrophe That Never Happened, I contend that this situation will probably never change, so it’s time to stop holding out for a scientifically accurate global estimate and generate a reasonable and credible ‘best guess’. Recent surveys from several critical polar bear subpopulations have given us the information necessary to do this.

These new numbers make it possible to extrapolate from ‘known’ to ‘unknown’ subpopulations within so-called ‘sea ice ecoregions’ (defined in 2007 by polar bear scientists at the US Geological Survey, see Amstrup et al. 2007), as shown below, to update old estimates and generate new ones for never-studied areas. 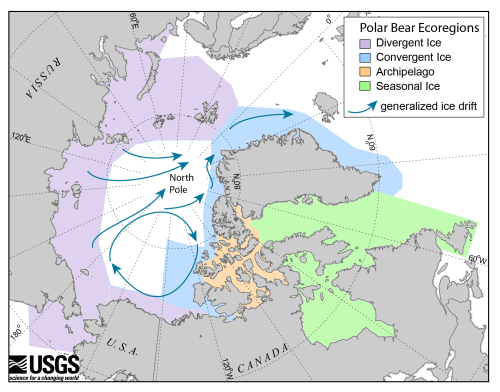 Since the PBSG has so far refused to take this step, I took on the challenge. I contend that an estimate of about 39,000 (range 26,000-58,000) at 2018 is not only plausible but scientifically defensible. See the graph below from my new book:

See my new book (Crockford 2019) for the full rationale and references used to arrive at this figure.

The bottom line: it is scientifically unacceptable for the PBSG to continue to refuse to provide an extrapolated ‘best guess’ global estimate for polar bears, given that the scientifically accurate estimate they crave is essentially unattainable. An estimate of about 39,000 (range 26,000-58,000) at 2018 is not only plausible but scientifically defensible. END_OF_DOCUMENT_TOKEN_TO_BE_REPLACED

POLAR BEAR Habitat Update: Abundant Sea Ice Across The Arctic, Even In The Barents Sea

DIRE predictions of an “ice-free” Arctic have remained popular on the climate change fear-mongering circuit, owing to the psychological and political currency of all things melting and not least the emotional relevance applicable to the fate of the Arctic’s most famous resident and ‘global warming’ mascot – the polar bear.

Abundant ice in Svalbard, East Greenland and the Labrador Sea is excellent news for the spring feeding season ahead because this is when bears truly need the presence of ice for hunting and mating. As far as I can tell, sea ice has not reached Bear Island, Norway at this time of year since 2010 but this year ice moved down to the island on 3 March and has been there ever since. This may mean we’ll be getting reports of polar bear sightings from the meteorological station there, so stay tuned. 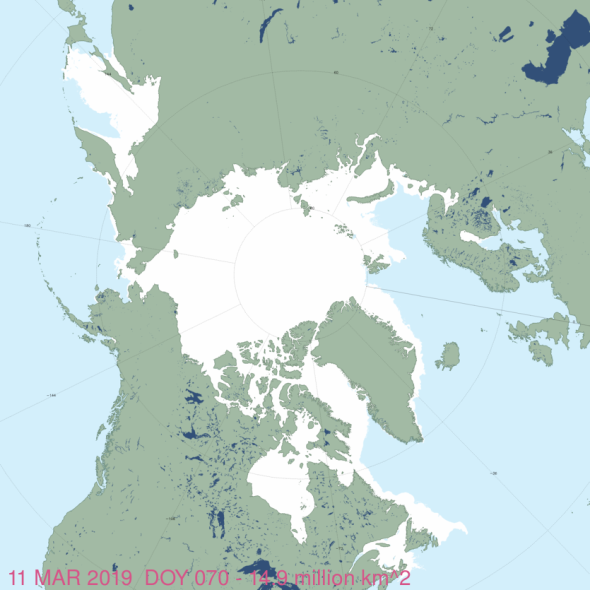 Much of the ice that was blown out of the Bering Sea early in the month has returned and ice in the Gulf of St. Lawrence on the East Coast of Canada is the highest its been in years, threatening to impede ferry traffic between Nova…

DON’T expect to see this ‘good news’ report anywhere on the mainstream media. They are only interested in adverse environmental stories, death and catastrophe, in order to push their CO2-centric, man-made global warming agenda.

The State of the Polar Bear Report for 2018, published today by the Global Warming Policy Foundation, confirms that polar bears are continuing to thrive, despite recent reductions in sea ice levels. This finding contradicts claims by environmentalists and some scientists that falls in sea ice would wipe out bear populations.

The report’s author, zoologist Dr Susan Crockford, says that there is now very little evidence to support the idea that the polar bear is threatened with extinction by climate change.

“We now know that polar bears are very resourceful creatures. They have made it through warm periods in the past and they seem to be taking the current warming in their stride too”.

In fact, it is the human residents of the…