The ABC reports – Perth’s Kwinana Freeway will be permanently flooded by 2100, oceanographer warns 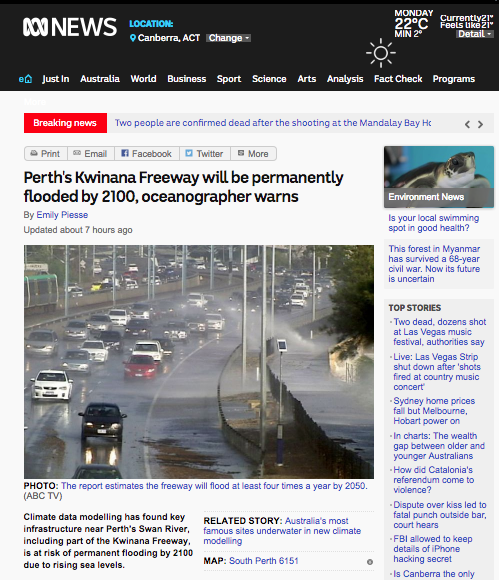 PHOTO: The report estimates the freeway will flood at least four times a year by 2050. (ABC TV)

Recent media publicity around a “State of Australian Cities” reporthas beaten up claims that Perth sea-levels are rising at three times the global average, or near 10mm per year. A matter that Federal Infrastructure Minister Anthony Albanese described as “disturbing and extraordinary”. Chris Gillham shows that the claims in the State of Australian Cities report re Perth sea level rise are over-hyped.
This chart fom a 2010 WA Govt planning report shows long term sea level changes at Fremantle.

The State of Australian Cities report concentrates on shorter term more sensational trends in the last 20 years but omits to quote recent research measuring rapid subsidence of large areas of the Perth coastal plain.
A 2012 paper – Anthropogenic land subsidence in the Perth Basin: challenges for its retrospective geodetic detection – says subsidence at Gnangara for the 14 years 1997-2011 has averaged 4.6mm per year – see Table 1 below.

In recent decades subsidence has been worsened by increased drawdown ground water for Perth water supplies – a process which has eased post 2005.

This online chart shows CGPS readings from the Hillarys tide gauge installation and indicates steady sinking of ~3mm per year 2006-2012. There are no CGPS readings I can find from Fremantle.

Hillarys has CGPS data from 1997 and Featherstone et al say those data – “…are not in a form that can be readily analysed in a short time frame, particularly because of the multiple equipment changes that make the time series very discontinuous.” Other published versions of the Hillarys CGPS data quote a 1998-2009 subsidence averaging just over 5mm per year. Watson PJ – Is There Evidence Yet of Acceleration in Mean Sea Level
Rise around Mainland Australia?
Journal of Coastal Research, Vol. 27, No. 2, 2011
Featherstone et al 2012 discuss surveying to detect level changes and say – “There is some scope for detecting subsidence in the Perth Basin if levelling is repeated now or sometime in the future. However, the costs are likely to be prohibitive.”
I fail to see how a few repeat levelling traverses from the Darling Ranges to the coast costing what ? – a few $million ? – should be beyond the wealth of a First World nation like Australia. Apparently some traverses were carried out in the 1980’s.
There is no shortage of Govt grant monies to waste on shonky Greenhouse inspired “research”.
Tide gauges and harbours are often located in places where the crust is sinking due to say sedimentation from a river. Any harbour structure attached to piles will slowly sink into the muddy substrate over the decades – factors like traffic vibration, a century of ships banging into piles – all can contribute to piles sinking. Dock areas where tide gauges tend to be installed are often the sites of reclaimed land, Auckland is an example. This tends to quietly settle for decades which can confound tide gauge data. At Fremantle 150 years of urbanization – including storm-water drainage direct to the sea – can lower ground water levels and cause subsidence – quite apart from deliberate ground water harvesting.