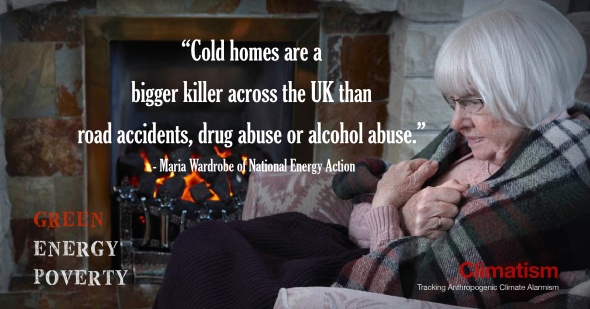 Why is one older person dying every seven minutes during the winter? | Dawn Foster | Society | The Guardian

“More than 2,700 people are dying each year in England and Wales because they cannot afford to keep their homes warm, according to an official study.

The spiralling cost of gas and electricity combined with the impact of green taxes is putting health and lives at risk, researchers found.

The study concluded that green taxes on household power bills are ‘regressive’ and have a disproportionate impact on poorer households.”

Paul Homewood with the latest disturbing statistics out of UK’s ONS:

The ONS has published the Excess Winter Deaths stats for 2017/18, and as expected they are sharply up:

This is strong evidence that heatwaves have no significant effect on mortality rates.

But that does not stop MPs from warning us about 7000 heat-related deaths every year by 2050.

THIS is the grim reality of what life looks like under the totalitarian rule of the feel-good ‘Greens’. The “zero-emissions” zealots who want to force us backwards down the energy ladder to the days of human, animal and solar power.

JUST as socialist central planning failed miserably before it was replaced by free market economies, green central planning will have to be discarded before Australia and other Western nations, crippled by the mad rush into costly ‘green’ energy, will see a return to energy security, competitive pricing and a ‘liveable’ existence for our most vulnerable.