“We’ve got to ride this global warming issue.
Even if the theory of global warming is wrong,
we will be doing the right thing in terms of
economic and environmental policy.”
– Timothy Wirth,
President of the UN Foundation

A new study says the warming in the last quarter of the 20th century may been caused by clean-air policies, which led to more solar radiation getting through:

Clean-air policies in developing countries have resulted in reduced levels of anthropogenic atmospheric aerosol pollution. Reductions in aerosol pollution is thought to result in a reduction in haze and cloud layers, leading to an increase in the amount of solar radiation reaching the surface, and ultimately, an increase in surface temperatures. There have been many studies illustrating coherent relationships between surface solar radiation and temperature however, a direct link between aerosol emissions, concentrations, and surface radiation has not been demonstrated to date. Here, we illustrate a coherence between the trends of reducing anthropogenic aerosol emissions and concentrations, at the interface between the North-East Atlantic and western-Europe, leading to a staggering increase in surface solar radiation of the order of ?20% over the last decade.

This suggests not much more warming may come, other than the long-term bounce-back from the Little Ice Age.

Another study challenges the claims of warming preachers that global warming would slow coral growth by making the oceans less alkaline:

The increase in atmospheric CO2 concentration, which has resulted from the burning of fossil fuels, is being absorbed by the oceans and is causing ocean acidification. Ocean acidification involves the decrease of both the pH and the calcium carbonate saturation state. Ocean acidification is predicted to impact the physiology of marine organisms and reduce the calcification rates of corals. In the present study, we measured the rates of calcification, respiration, photosynthesis, and zooxanthellae density of the tropical coral Acropora digitifera under near-natural summertime temperature and sunlight for a 5-week period. We found that these key physiological parameters were not affected by both mid-CO2 (pCO2 = 744 ± 38, pH = 7.97 ± 0.02, ?arag = 2.6 ± 0.1) and high-CO2 conditions (pCO2 = 2,142 ± 205, pH = 7.56 ± 0.04, ?arag = 1.1 ± 0.2) throughout the 35 days experimental period. Additionally, there was no significant correlation between calcification rate and seawater aragonite saturation (?arag). These results suggest that the impacts of ocean acidification on corals physiology may be more complex than have been previously proposed.

Remember how Penny Wong, then the Climate Change Minister, used a drought in 2009 to frighten people into believing the government’s global warming scare?

Research shows that this severe, extended drought is clearly linked with global warming… There is nowhere that this challenge is more serious than the Murray Darling Basin.

According to satellite measurements, over the past 16 years and 9 months, there has been no Global Warming at all. 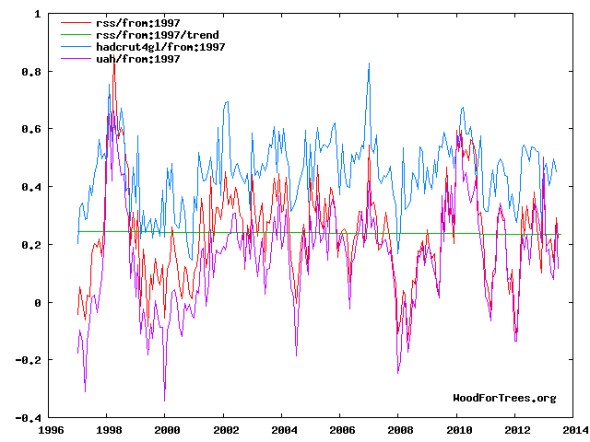