The journal Nature embraces ‘the pause’ and ocean cycles as the cause, Trenberth still betting his heat will show up

From the “settled science” department. It seems even Dr. Kevin Trenberth is now admitting to the cyclic influences of the AMO and PDO on global climate. Neither “carbon” nor “carbon dioxide” is mentioned in this article that cites Trenberth as saying: “The 1997 to ’98 El Niño event was a trigger for the changes in the Pacific, and I think that’s very probably the beginning of the hiatus,”

This is significant, as it represents a coming to terms with “the pause” not only by Nature, but by Trenberth too.

Excerpts from the article by Jeff Tollefson:

The biggest mystery in climate science today may have begun, unbeknownst to anybody at the time, with a subtle weakening of the tropical trade winds blowing across the Pacific Ocean in late 1997. These winds normally push sun-baked water towards Indonesia. When they slackened, the warm water sloshed back towards South America, resulting in…

“So even the rain that falls isn’t actually going to fill our dams and our river systems, and that’s a real worry for the people in the bush.” –Tim Flannery, AU Climate Commissar

“As scientists have been saying for many years, the Earth is warming rapidly. Human activities, in particular the burning of fossil fuels, have triggered this warming. If we fail to address it, there will be even more serious implications for humanity than the impacts we are seeing already.”

In recent weeks Nature journal has published two papers which support sceptics claim that global warming stopped 15-17 years ago. The latest peer-reviewed research brutally contradicts the Australian Climate Commission’s wildly alarmist and ideological assertion that the Earth is heating at an alarming rate: 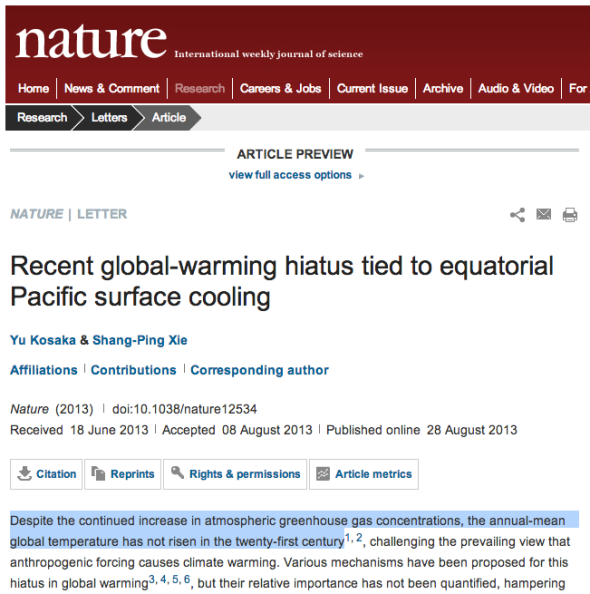 Satellite temperature records on six different data sets show that there has been no atmospheric global warming since 1998 or any statistically-significant warming for between 18 and 23 years. A distinct lack of any warming evident, despite a dramatic rise in industrial greenhouse gas emissions over the same period:

More Peer-Reviewed studies that confirm the lack of any recent global warming:

“The Oceans Ate My Global Warming” – With no rise in atmospheric temps over the past 15-17 years, the latest bluff in climate alarmism is that the ‘missing heat’ is hiding at the bottom of the oceans. However since 2003, 3000+ ARGO satellite buoys which descend to depths of 2,000 metres, continually recording ocean temperatures, have not detected a rise in ocean temps either:

The Arctic has witnessed a dramatic bounce back from 2012 lows, dumbfounding scientists and Arctic alarmists alike. 2013 Arctic ice extent has gained 72% from 2012: 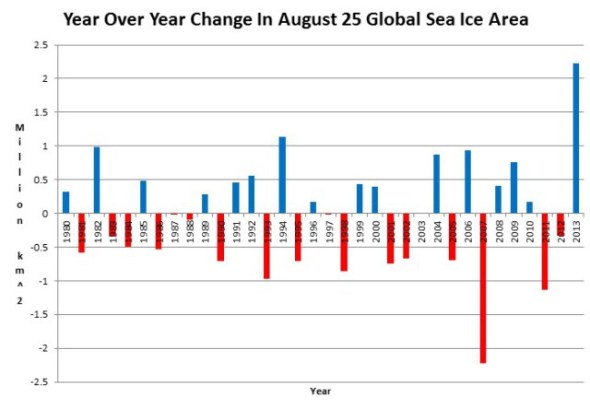 Antarctic ice is at an all-time record high:

ACC Claim: Singling out short term trends in air temperature to imply that global warming is not occurring is incorrect and misleading.

Atmospheric surface temps have been used and marketed since the end of the last global cooling phase from 1945-1976 and explicitly through the 1990′s as the definitive measure of human-induced (anthropogenic) global warming.

NASA’s Goddard Institute for Space Studies (GISS), former directer James Hansen, and the British Hadley Centre for Climate Change, have consistently promoted the use of surface temperature as a metric for global warming. The highly publicised, monthly global surface temperature has become an icon of AGW alarmist projections made by the IPCC.

The ACC contests that short-term trends are misleading, however the entire anthropogenic global warming scare was predicated on only 22 years of atmospheric warming from 1976-1998. Back then air temp data was in fashion, now that air temps have not risen over the past 15-17 years, global warming alarmists deny and reject them and now claim the ‘missing heat’ is hiding in the oceans!

For a detailed summary of the Climate Commission’s absurd propagandist claims about Earth continuing to heat at an alarming rate, please read this superb summary by John Happs out of Quadrant Online:

In its publication, “The Angry Summer” the Australian Climate Commission (ACC) provides the dramatic headline:

In a forlorn attempt to assure the public that the information it provides can be trusted, the government-appointed ACC states on its website:

Independent and reliable?  Then why the following disclaimer:

There are those who dismiss the ACC as little more than a mouthpiece for government propaganda to justify its carbon (dioxide) tax, but its website does provide one excellent piece of advice:

“The Commission recommends that users ….. carefully evaluate the accuracy, currency, completeness and relevance of the material on the website for their purposes.”

So let’s do just that.

The ACC has trumpeted its message about catastrophic anthropogenic global warming (CAGW):

“The Earth continues to warm strongly despite sceptics claims.”

It appears that Chief Climate Commissioner and paleontologist Professor Tim Flannery doesn’t seem to know if he should support the ACC’s strong warming message or actually heed real-world evidence. In 2009 he said:

“We’re dealing with an incomplete understanding of the way the earth system works… When we come to the last few years when we haven’t seen a continuation of that (warming) trendwe don’t understand all of the factors that create earth’s climate…We just don’t understand the way the whole system works… See, these people work with models, computer modelling. So when the computer modelling and the real world data disagree you’ve got a very interesting problem… Sure for the last 10 years we’ve gone through a slight cooling trend.” (4) (author’s emphasis)

Cooling over the last 10 years?  Following that public admission, someone at the ACC must have had a quiet word with Flannery since he later did a U-turn, telling Leigh Sales (March 4, 2013):

“If you look at the temperature of the Earth, we have to measure the oceans, the air and the land. And there, we see a continually strong rise in temperature.” (5)

A strong rise in temperature?  I’m sure the scientific community would certainly like to learn more from the ACC about this strong global temperature rise that few seem to be aware of.

It appears that Flannery is no stranger to contradictions. He has even contradicted the ACC about the reliability of findings from the now discredited Intergovernmental Panel on Climate Change (IPCC). On the one hand, the ACC declares that the IPCC is an authority on climate science:

“The IPCC is the leading international body for the assessment of climate change and is acknowledged by governments around the world, including the Australian Government, as the authoritative source of advice on climate change.” (6)

Yet, in Flannery’s 2005 book, The Weather Makers, he emphatically disagreed:

“The pronouncements of the IPCC do not represent mainstream science, nor even good science, but lowest-common-denominator-science – and of course even that is delivered at glacial speed.” (7)

What is it about the ACC and contradictions? Flannery’s fellow climate commissioner, chemical engineer Professor Will Steffen, is also no stranger to contradictions.  In 2011 he told Andrew Bolt:

“We’ve had very severe droughts before so again we cannot attribute this drought statistically to climate change….”

Someone at the ACC must have also had a quiet word with Steffen. In 2013 we saw another U-turn:

“Australia has long had a highly variable climate of droughts and heavy rains, and this pattern is likely to continue into the future. However, climate change is likely to increase the severity of these extreme weather events…”

Such contradictions tend to generate doubt about the reliability of ACC pronouncements on climate. Let’s return to Flannery’s statement about global temperature:

“If you look at the temperature of the Earth, we have to measure the oceans, the air and the land. And there, we see a continually strong rise in temperature.”

Not only has there been no recent warming of the atmosphere but the oceans, which store most of the heat within the climate system, also show a lack of warming. More than 3,000 Argo buoys (8) descend to depths of 2,000 metres, continually recording ocean temperatures. Contrary to IPCC climate model predictions and Flannery’s statement, Argo data have shown no overall ocean temperature rise since deployment in 2003 (9) Keep Reading »