“Prior to the election of Donald J Trump, the US was on an economy wrecking trajectory, set by renewable energy rent seekers and the eco-zealots that champion their cause: numerous American states, not least Texas and California, as well as the prairies of the mid-west have been overrun with costly and chaotic subsidised wind and solar.

Power prices in those states inevitably skyrocketed – wind and solar ‘powered’ Californians pay 40% more for power than the US average – threatening homegrown American industry and hundreds of thousands of blue-collar jobs.

Then came Donald Trump, and all that changed.”

America truly is exceptional: while plenty of Western democracies are still piling into subsidised wind and solar, the USA is getting out.

Prior to the election of Donald J Trump, the US was on an economy wrecking trajectory, set by renewable energy rent seekers and the eco-zealots that champion their cause: numerous American states, not least Texas and California, as well as the prairies of the mid-west have been overrun with costly and chaotic subsidised wind and solar.

Power prices in those states inevitably rocketed – wind and solar ‘powered’  Californians pay 40% more for power than the US average – threatening homegrown American industry and hundreds of thousands of blue-collar jobs.

Then came Donald Trump, and all that changed.

One of the loudest advocates for wind and solar in the US, Audrey Zibelman was run out of town and ended up in Australia – where she’s clearly determined to…

IMAGINE the red-faces if they, just for once, honestly reported that spending TRILLIONS of €EUROS, of other people’s money, on unreliable energy – wind and solar – was actually increasing emissions, where fracking for natural gas (a “dirty” fossil fuel) was dramatically lowering them! END_OF_DOCUMENT_TOKEN_TO_BE_REPLACED

“THE stark reality is that healthier economies mean more energy use, and consequently, rising emissions (though not always). When economies were in a slump, it was easier to commit to emissions reductions. When countries’ economies began to grow, many saw emissions rise.

“…the Berlin-based organization Urgewald projects that 1,600 new coal-fired generating plants under construction or planned will result in 840,000 megawatts of new capacity.

“Germany, a world leader on climate action, has failed to cut emissions and has actually seen emissions rise during the past two years.

By Nicolas Loris and Bryan Cosby ~

June 1 marks the first anniversary of President Donald Trump’s having begun the process of withdrawing the United States from the Paris climate accord.

Most nations that signed the Paris climate accords will soon fail to meet their agreement-defined deadlines for fossil fuel reduction. (Photo: baona/Getty Images)

Trump justified the withdrawal by calling the situation “the latest example of Washington entering into an agreement that disadvantages the United States to the exclusive benefit of other countries.”

Trump was wrong. The climate accord is not just a bad deal for the U.S., but for all of the developed countries that have committed to higher energy…

“AND no, he doesn’t believe we should be creating useless regulations that eliminate jobs and make families pay more for energy just so Al Gore and most of Hollywood can feel good about themselves.”

You know why they are going after Environmental Protection Agency secretary Scott Pruitt?

I can give you at least three reasons.

No. 1: He has led the Trump administration’s efforts to dismantle President Barack Obama’s expensive and ineffective climate legacy piece by piece.

From the Clean Power Plan, which was all about Obama’s climate agenda and which had nothing to do with creating clean air (we already have laws about that), to the Waters of the United States regulation, which could turn a puddle in your front yard into environmentally-protected swamp land—Pruitt has been rolling back many of the regulations put in place by Obama’s overzealous, power-grabbing, and arguably unconstitutional EPA.

No. 2: They also don’t like the fact that just this week Pruitt’s team at the EPA revised a mandate on fuel standards that will make new cars significantly cheaper—maybe as much as $7,000 cheaper.

FROM Rules for Radicals by Saul Alinsky: “Accuse your opponent of what only you are doing as you are doing it to create confusion.” (Quote also attributed to Karl Marx and Goebbels.)

HILLARY Clinton and Barack Obama both seriously engaged with Alinsky’s ideas — Clinton knowing him personally. Her senior thesis was about Saul Alinsky.

What did Alinsky actually believe?
Rules for Radicals was Alinsky’s last book, completed the year before his death, and it laid out his organizing philosophy in detail. Its centerpiece is a list of rules of “power tactics,” meant as basic guidelines for community organizers (Obama) and community activists (Clinton):

1. Power is not only what you have but what the enemy thinks you have.
2. Never go outside the experience of your people.
3. Wherever possible go outside of the experience of the enemy.
4. Make the enemy live up to their own book of rules.
5. Ridicule is man’s most potent weapon.
6. A good tactic is one that your people enjoy.
7. A tactic that drags on too long becomes a drag.
8. Keep the pressure on.
9. The threat is usually more terrifying than the thing itself.
10. The major premise for tactics is the development of operations that will maintain a constant pressure upon the opposition.
11. If you push a negative hard and deep enough it will break through into its counterside.
12. The price of a successful attack is a constructive alternative.
13. Pick the target, freeze it, personalize it, and polarize it.

MOST of these are elaborated upon in more detail in the book. For example, on #5, Alinsky notes, “It is almost impossible to counterattack ridicule. Also it infuriates the opposition, who then react (Trump tweets!) to your advantage.”

IT’S not hard to see the link between the modern Left’s tactics of identity politics; PC, division, smear and slime and Alinsky’s rules for radicals.

MORE info on links between Clinton/Obama and Alinsky:

Monitoring Twitter, a number of people are reporting some download sites aren’t working. So, since WUWT has been setup to handle such things (Climategate for example) here is the memo in full. Some might say “Why is WUWT getting into the polictical mess that has nothing to do with climate?”.

Well, if you monitor Twitter like I do, you’ll see that many of the major players in climate alarmism are Tweeting about it. I figure if Michael Mann can rail about it…

…the least I can do is provide a link for the document.

SENSE and reason prevailing, once again, after a decade of Obama-climate, threat-propaganda, marxist madness!

The Pentagon released a National Defense Strategy that for the first time in more than a decade does not mention manmade global warming as a security threat.

An 11-page summary of the new National Defense Strategy makes no mention of “global warming” or “climate change”. The document makes no mention of “climate,” “warming,” “planet,” “sea levels” or even “temperature.” All 22 uses of the word “environment” refer to the strategic or security landscape.

The document is here: https://www.defense.gov/Portals/1/Documents/pubs/2018-National-Defense-Strategy-Summary.pdf

The National Defense Strategy, signed by Defense Secretary James Mattis, doesn’t have much to say about energy issues, except that the U.S. would “foster a stable and secure Middle East” and “contributes to stable global energy markets and secure trade routes.”

The Pentagon released the strategy document Friday, and officials were clear that it would make no mention of global warming. The Bush administration added global warming to the defense strategy in…

“According to reports, members of the Trump administration will lend their support to an event to promote fossil fuels and nuclear power as solutions to climate change.” 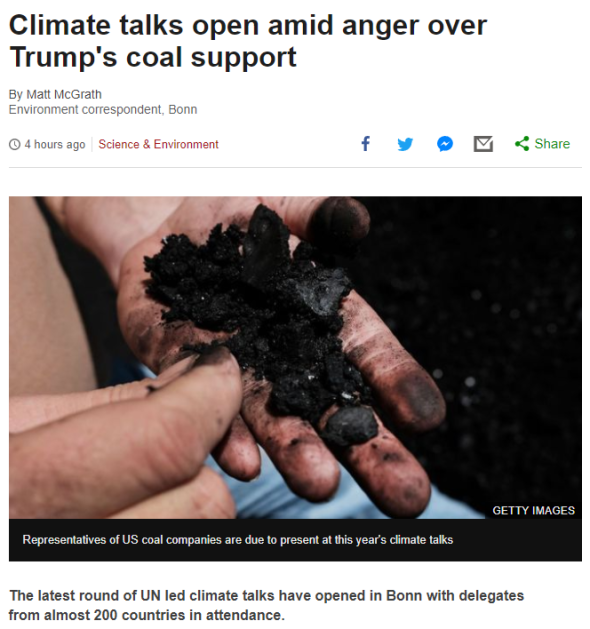 Over the next two weeks, negotiators hope to clarify the rulebook of the Paris climate agreement.

It is the first major meeting since President Trump announced plans to take the US out of the Paris pact last June.

Many delegates are unhappy with White House plans to promote fossil fuels here as a “solution” to climate change.

According to reports, members of the Trump administration will lend their support to an event to promote fossil fuels and nuclear power as solutions to climate change.
Speakers from coal giant Peabody Energy, among others, will make a presentation to highlight the role that coal and other fuels can play in curbing the…