WAR!! Another Climate Change Falsehood Blown Away By ‘Real’ Science

EVERYONE is familiar with the “climate change caused the Syrian war” meme that invaded the climate lexicon in another attempt to ping man-made  climate change as the root cause of anything and everything that is bad in the world.

CLIMATE CHANGE helping to create ISIS was listed as #49 on the The Lid‘s “official list,” of stupid things global warming enthusiasts have blamed on their failed theory:

COLOURLESS, odourless, tasteless, non-reactive, trace gas and plant food ‘carbon dioxide’ as the cause of ISIS and the Syrian war was qualified by the usual suspects – Prince Charles, Leo DiCaprio, Al Gore, the Obama admin, Former Secretary of State John Kerry, the climate-theory obsessed mainstream media and of course, the authority that matters most – academia…

CHARLES B. Strozier Professor of History, The City University of New York; and Kelly A. Berkell Attorney and research associate, Center on Terrorism at John Jay College of Criminal Justice believe that ISIS formed because of a severe drought in Syria from 2006-2010 and that drought happened because of—you guessed it—Climate Change.

As the Obama administration undertakes a highly public, multilateral campaign to degrade and destroy the militant jihadists known as ISIS, ISIL and the Islamic State, many in the West remain unaware that climate played a significant role in the rise of Syria’s extremists. A historic drought afflicted the country from 2006 through 2010, setting off a dire humanitarian crisis for millions of Syrians. Yet the four-year drought evoked little response from Bashar al-Assad’s government. Rage at the regime’s callousness boiled over in 2011, helping to fuel the popular uprising. In the ensuing chaos, ISIS stole onto the scene, proclaimed a caliphate in late June and accelerated its rampage of atrocities including the recent beheadings of three Western civilians.
While ISIS threatens brutal violence against all who dissent from its harsh ideology, climate change menaces communities (less maliciously) with increasingly extreme weather.

BEING a ‘historian’, one would think that prof. Strozier would be aware that Syria has experienced drought before… 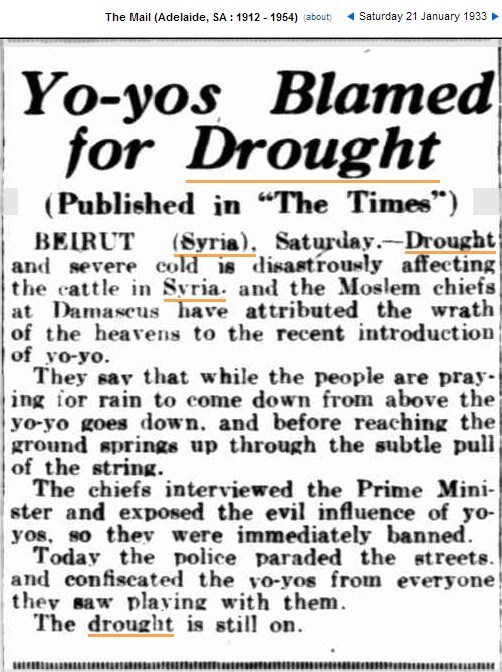 IN the 1870s, Syrian drought had something to do with Christian imperfection:

Little change in global drought over the past 60 years | Nature

A new study from the University of Melbourne, the Georg Eckert Institute and Freie Universität has found several problems with research related to assessing the propensity for war amid environmental changes due to ‘global warming’.

THE study, published in the journal Nature Climate Change, found such research suffers from “a streetlight effect.”

“We demonstrate that research on climate change and violent conflict suffers from a streetlight effect,” reads the study. The “streetlight effect” is when researchers search for answers where it’s easiest, instead of where the right answer might be.

“Further, studies which focus on a small number of cases in particular are strongly informed by cases where there has been conflict, do not sample on the independent variables (climate impact or risk), and hence tend to find some association between these two variables,” reads the study.

Linking global warming to violent conflict became in vogue after Syria erupted in violence in 2011. Researchers quickly began suggesting the drought that wreaked havoc on rural Syria served as a spark for civil war.

The Obama administration considered global warming a national security threat, and top officials often repeated the claim that violence in Syria, and the rise of ISIS, stemmed from climate factors.

Al Gore Wrong About Climate And Conflicts | The Daily Caller

CLIMATE realists/sceptics called it right again. Don’t expect an apology or correction from the mainstream media, Hollywood, the Obama administration, Prince Charles, the UN, academics or Leo DiCaprio for misleading you on climate change, yet again.

No matter the amount, your donation is greatly appreciated. You WILL make a difference. The less time spent finding money, the more time we have to fight the alarmists. 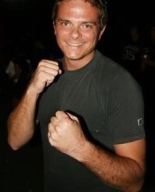 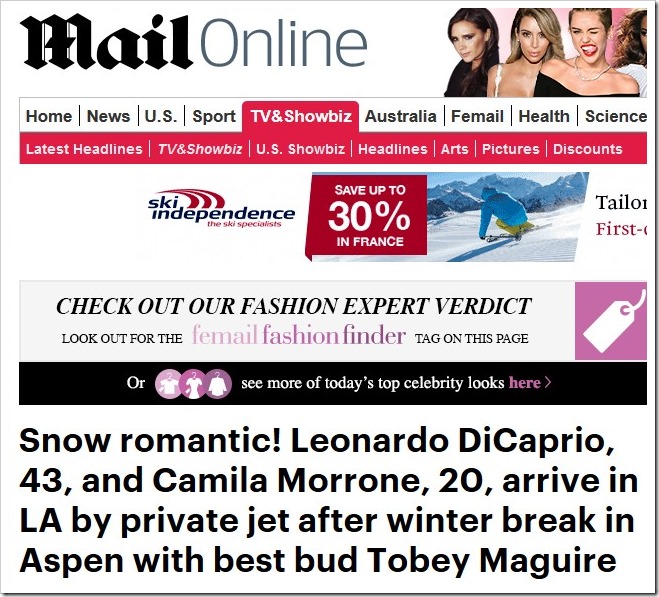 Alan Carlin: None of the climate alarmist apocalypses have occurred or are even possible

HOWEVER, outside of overheated U.N. climate models and daily hysteria from the sycophant lamestream media, there is still no tangible “Climate Crisis”.

THE name change from “global warming” to “climate change” is perhaps the biggest giveaway. Owing to the peer-reviewed, scientific fact that the planet stopped warming around 20 years ago.

ENTER “climate change” – hot, cold, wet, dry, flood, drought, blizzard – it’s all your fault and you and your “unsustainable” lifestyles are ‘changing’ the weather – whatever that means.

AND, what is the mythical perfect climate that alarmists want? What if we stop ALL hydrocarbon based energy tomorrow and there’s a hurricane next year? Or what happens if Australia has a heatwave? How many days should it last? How much less or more rain is better if we get serious and live in caves? Will the weather be eternally idyllic for modern cave-dwelling?

WILL the pontificators of the media driven climate hysteria; DiCaprio, Al Gore, Obama, Bill Nye, The Pope et al live in caves too?

CLEARLY they won’t. But why not? After all, there is a genuine “climate crisis” right? Or at least they tell us that there is. Everyday.

EITHER way, cave or no cave, Leonardo DiCaprio’s new island development is a serious death trap according to what he preaches atop the U.N. pulpit. Whoever advised him to build on an island when sea levels are meant to rise by 10-100 feet by 2100 according to experts like Leo.

MAYBE, just maybe he’s lying his ass off to feed the biggest scientific fraud ever perpetrated upon mankind.

Earth and climate – an ongoing controversy
Lack of predictive success is a strong warning sign that something is amiss in the world of climate science in general and its modelling in particular.

The climate alarmists have long tried to sell their apocalyptic scam by claiming that their policies will avoid catastrophic increases in global temperatures, writes Alan Carlin.

The Daily Caller has recently inventoried some of the widely publicized such climate apocalypses predicted over the last 30 years by examining 12 of them.

People have wised up to the global warming scare. They are sick and tired of being lied, exaggerated and lectured to, especially by those who pontificate from 30,000 feet up.

The weekend ratings are out, and they aren’t good news for Leonardo DiCaprio’s Global Warming Epic ‘Before the Flood‘, which we reviewed yesterday on WUWT. Showbuzz Daily has listed the top 150 TV and Cable programs for the weekend, and in ‘the hottest year ever’, discussing the ‘most important topic ever’, Before the Flood came in at #61 for the weekend. 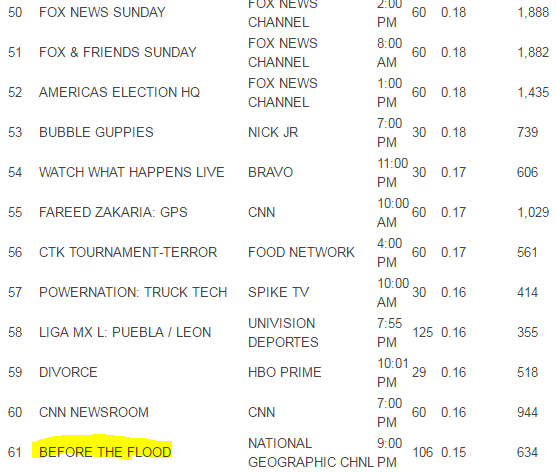 Ironically, the kids show “Bubble Guppies” beat it at #53. Ouch.

Perhaps this snoozer didn’t do so well because of the stellar cast of characters? 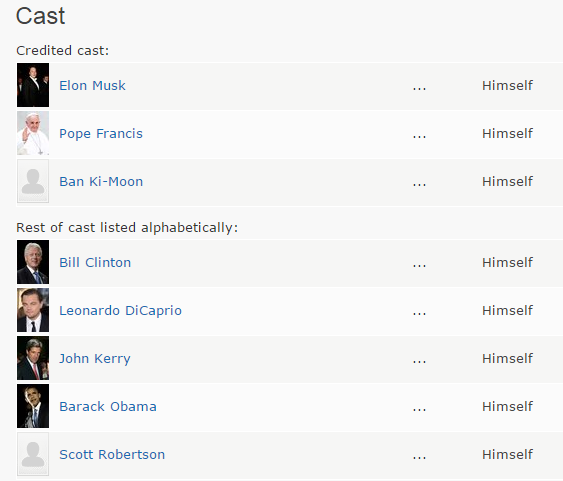 I mean, who wouldn’t want to tune in and have a jet-setting actor-millionaire, a government handout beneficiary, a Pope, the globe-trotting Secretary of State, the lame-duck president, the ‘Horndog-in-Chief” and the leader of the U.N. come on for 96 minutes and berate you for doing things like driving your car, eating hamburgers, and just not caring enough about the planet like they…