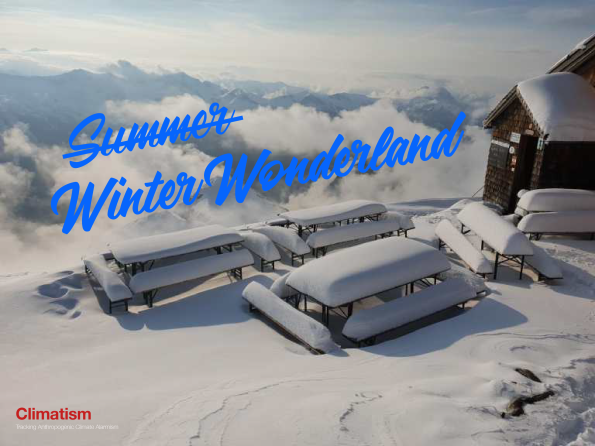 Snowfall will become “a very rare and exciting event.”
“Children just aren’t going to know what snow is.” IMAGINE the red-faces if they, just for once, honestly reported that spending TRILLIONS of €EUROS, of other people’s money, on unreliable energy – wind and solar – was actually increasing emissions, where fracking for natural gas (a “dirty” fossil fuel) was dramatically lowering them! END_OF_DOCUMENT_TOKEN_TO_BE_REPLACED

SNOWFALL Will Become “A Very Rare And Exciting Event…”

ONE of the more classic instances of climate change fear-mongering, gone horribly wrong, direct from the mouth of esteemed climatologist Dr David Viner of the UK’s CRU, circa 2000.

THE catastrophic dud-prediction was reported by Charles Onians in the Independent’s most cited (now deleted) article – Snowfalls are now just a thing of the past:

SINCE Viner’s vapid verbal, Europe and much of the Northern Hemisphere has experienced some of the coldest winters on record, especially over the past five years, with plenty of snow to boot…

MOSCOW saw more than half its average monthly snowfall in the space of 24 hours with 17 inches blanketing the capital by Sunday morning. At least one man was killed, several injured and about 2000 trees collapsed due to the heaviest snowfall in Moscow since the beginning of the weather records, said meteorologists.

WILL the casualties be recorded as human CO2-induced, climate change related? Or, do only “extreme heat” casualties make the cut?

THE Independent wasn’t alone in its failed snowfall predictions. Our most ‘trusted science’ agencies were parroting the same warmist propaganda…

AUSTRALIA’S ‘premier’ scientific body, the (warmist) CSIRO, jumped on the “end of snow” bandwagon in August 2003:

The End of Snow? – NYTimes.com

AND yet, climate realists (sceptics) are still smeared and slimed as the climate “deniers”. Rather telling when one considers the real-world evidence at hand.

1) Most people are far more intelligent than the elites give them credit for. They can see through the deception they have been fed, and are capable of using their own eyes to see what is really going on.

2) People are growing numb to the incessant propaganda.”

3) Economies, businesses and (non-elite) peoples’ livelihoods are being destroyed by insanely high electricity bills as a direct result of the West’s mad obsession with unreliable-energy, wind and solar.

If one were to rate the investment made by governments globally aimed at creating concern for a potential problem, then the huge investment in climate change fear by now would definitely have to be rated as “junk” quality.

Never has so much seen so little return.

Hundreds of billions have been invested so far with the aim of generating mass fear, and by now we would think the global public should be in a state of panic. That’s the least one would expect from such a massive investment in fostering fear.

But it turns out that climate change remains very low on the list of concerns that citizens have.

Ahh the delicious irony! EU CO2 emissions rising – whilst they lambast Trump whose emissions are declining – all the while blaming it on “Cold” weather which obviously corrupts the “CO2 = warming” narrative! 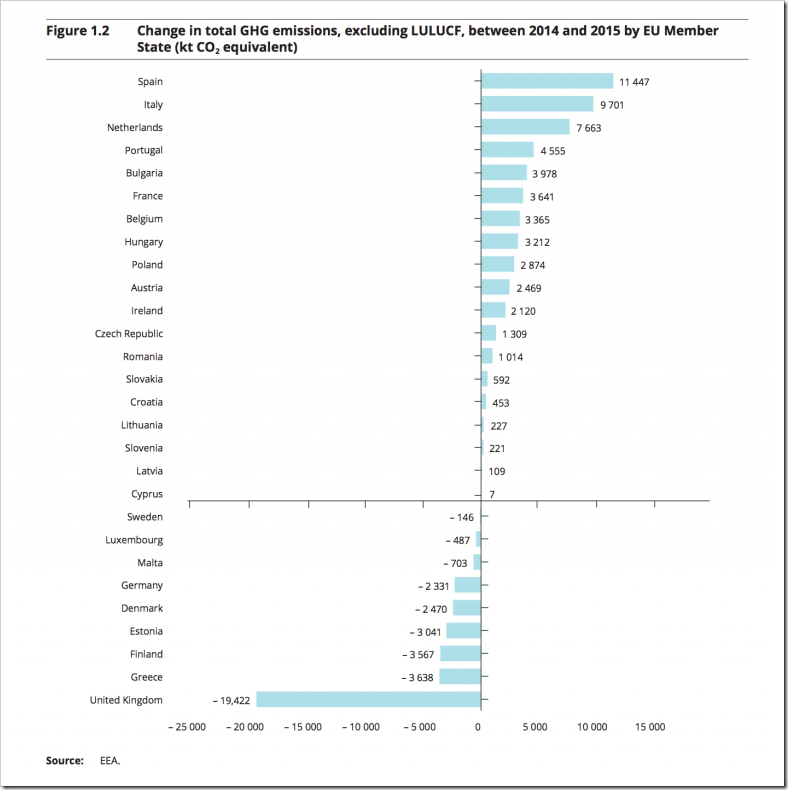 According to new data published by the European Environment Agency (EEA), the 0.5% increase happened largely due to increasing demand for transport – better fuel efficiency in the sector was not enough to offset this.

The report suggests a slightly colder winter across Europe also contributed to increased emissions, due to higher demand for heating.

Road transport emissions, which account for about a fifth of total EU greenhouse gas emissions, increased for the second year in a row, by 1.6 %. Aviation emissions also increased by 3.3 %.

Spain, Italy and the Netherlands accounted for the largest increases in greenhouse gas emissions, with the UK showing the largest decrease (7.5%) of the European…

Smart China – builds Windmill’s and solar panels for the eco-brainwashed West. And when they fail to deliver quality and reliable power, build and fund coal-fired power plants for the West!

Another “you cannot make this stuff up” scenario from the knee-jerk world of climate hysteria.

The Balkan region’s first privately-funded power plant came online on Tuesday, increasing the region’s dependency on coal-fired power stations even as environmental concerns are driving them to the brink of the extinction elsewhere in Europe. It was built by China’s Dongfang Electric Corp and financed with the help of a 350 million euro ($391.13 million) loan from the China Development Bank.

The 300-megawatt plant, in the northern Bosnian town of Stanari, is a foreign investment in a chronically impoverished country that remains heavily dependent on foreign aid more than 20 years after it emerged from war.

Even though the Western Balkans has a power deficit, European investors are reluctant to finance more polluting coal which forms the backbone of supply in the region, attracting Chinese financiers and contractors.

Work on the investment…