Study: Earth is becoming GREENER, not BROWNER due to climate change

“Carbon Pollution” (aka Carbon Dioxide) not so “dirty” after all!

It’s hard to say how many punny posts we came up with using those words when Carol Browner was Bill Clinton’s EPA Administrator, but here we use it in the context of a recent Science paper by J-F. Busteri and 30 named coauthors assisted by 239 volunteers. It found, looking at global drylands (about 40% of land areas fall into this category), that we had undercounted global forest cover by a whopping “at least 9%”.

239 people were required to examine over 210,000 0.5 hectare (1.2 acre) sample plots in GoogleEarth, and classify the cover as open or forested. Thing of being condemned to looking at that many satellite views of real estate. Anyway, Here’s the resultant cool map: 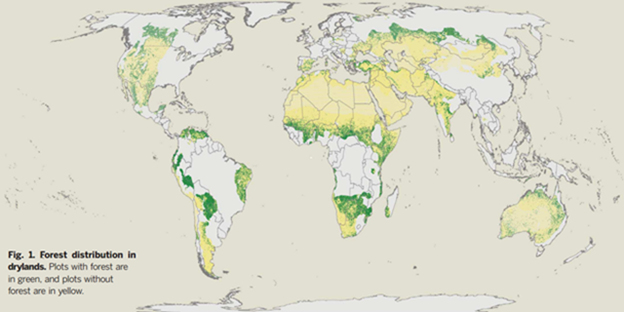 This has been the subject of a jillion recent stories, blog posts, tweets and whatever concerning Bastin et al. So let’s add a bit…

Good News! We Have Lots More Forest Than We Thought

SO, “Carbon Dioxide” is not the evil “pollutant” hysterically demonised by the climate cabal and even enshrined in law, as a “pollutant”, by Obama’s EPA!

The extra carbon dioxide in the atmosphere, whether produced by humans or nature, is actually growing Earths forests! Shock news.

Another reason other than “carbon pollution (sic)” promoting forest growth, would be the advancements in energy technology, in particular the burning of efficient and energy dense ‘fossil fuels’…

When we’re burning fossil fuels, it means we’re not burning something else and cutting down forests.

The more we burn fossil fuels, the more we can produce fertiliser. That means we use less land to grow food, so we can spare land for forests. So there is net forest increase, particularly in America. New England used to be 70% farmland, it’s now 70% forest. Countries like Bangladesh are growing more forest.

The best example of this is the border between Haiti and the Dominican Republic. Haiti is almost 99% deforested, as they rely totally on wood for domestic and industrial fuel. On the other side, the forests of the fossil fuel burning, eco-terrorists – the Dominican Republic, remain lush and green…

We’ve spent so long demonising fossil fuels, without objectively assessing the enormous benefits they provide, both for the environment and for the health and wellbeing of society in general.
The cheap, reliable nature of fossil fuels even made it possible to end slavery! Because we use machines instead of people. You either have cheap labour or cheap energy.

Moral of the story, THE greatest threat to the environment is not affluence, it’s poverty…

A new survey using high-definition satellite images has found 378 million additional hectares of forest around the globe—it’s as if all of Earth’s forests just grew by 9%.

(The hectare is an SI accepted metric system unit of area equal to 100 ares (10,000 m²) and primarily used in the measurement of land. An acre is about 0.4047 hectare and one hectare contains about 2.47 acres. I don’t do metric, and assume that some of you don’t either. You can also think of it as an area of forest equal to sixty percent of the size of Australia, if that helps)

“The forests have been identified in drylands in the Sahara desert, around the Mediterranean, southern Africa, central India, coastal Australia, western South America, north-east Brazil, northern Columbia and Venezuela and northern parts of Canada and Russia.”
*The image is of coastal Australia.