“We get a tax credit if we build a lot of wind farms.
That’s the only reason to build them.
They don’t make sense without the tax credit.
–– Warren Buffett

“Suggesting that renewables will let us phase rapidly off fossil fuels
in the United States, China, India, or the world as a whole
is almost the equivalent of believing in the Easter Bunny and Tooth Fairy.
– James Hansen
(The Godfather of AGW alarmism / former NASA climate chief)

AFTER hundreds of €Billions of taxpayer’s hard-earned-money spent on sunshine and breezes, Germany’s Energiewende program has been exposed as a catastrophic failure, with carbon dioxide emissions higher now than in 2009. 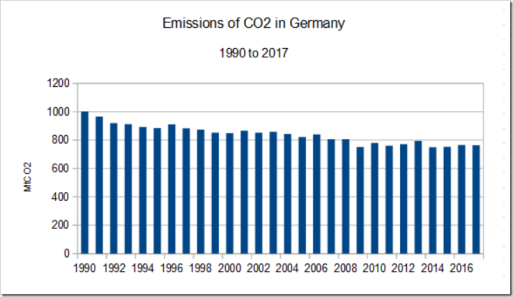 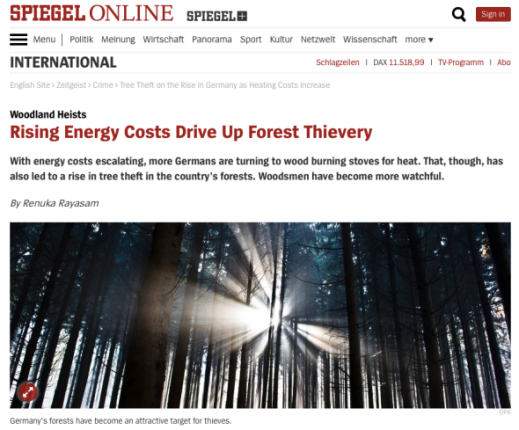 AND, before the CO2-centrics lose their collective minds, understand that HELE, supercritical coal plants guarantee an automatic 30% reduction in CO2 emissions. 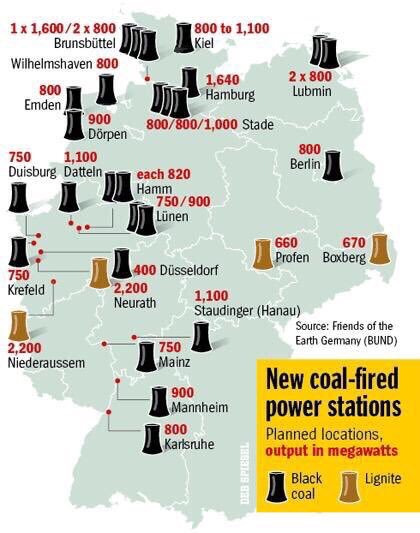 WHY not just install more windmills and mirrors to reduce power prices to alleviate energy poverty and resuscitate a German industry on life-support?

LOGICAL heads know the answer to that one.

An excellent, thorough analysis of Germany’s all-renewable nightmare. Essential reading for anyone wanting other countries to follow down this drain …

ORIGINS Of The ClimateChange™️ Scam :

“The fact that an opinion has been widely held is no evidence whatever that it is not utterly absurd; indeed in view of the silliness of the majority of mankind, a widespread belief is more likely to be foolish than sensible.” – Bertrand Russell

A STARK lesson in climate facts and data Vs ABC groupthink eco-ideology via “denier” numero uno – Andrew Bolt of The Herald Sun.

MAKE your own mind up. Who really are the real “science deniers”, the sceptics or the “save the planet” virtue-signalling, eco-zealots? …

The real “deniers” are generally not the global warming sceptics but the extremists who denounce them. Take ABC commentator Paul Bongiorno, who today denied the science in attacking Tony Abbott’s speech in London overnight.

In most countries, far more people die in cold snaps than in heat waves, so a gradual lift in global temperatures, especially if it’s accompanied by more prosperity and more capacity to adapt to change, might even be beneficial.

This just flies in the face of contemporary science.

Actually, it’s warmist Paul himself who flies in the face of science.

A new study published in The Lancet shows 6.5% of deaths in this country are attributed to cold weather, compared with 0.5% from hot weather. Most deaths will be from cardiovascular and respiratory disease, as it’s the heart and lungs that struggle when we are outside our comfort zone.

And global warming policies of the kind Bongiorno supports will make the dying worse by making electricity too expensive for the poor:

The situation has become so dire that 77 per cent of low-income NSW households are going without heating in a bid to reduce their onerous power bills, new research from the NSW Council of Social Service (NCOSS) shows. And one in three low-income earners have been forced to stop using hot water for bathing to pay for energy bills.

Then there’s the increased crops we’re getting as the world (mildly) warms.

The latest indications for the current season point to record cereal production in 2017 at the world level with total inventories hitting a new peak.

It’s the invincible ignorance of Bongiorno that staggers me. Confronted with facts that challenge his ideology he instinctively denies them, and, indeed, went on to insult Abbott as someone he falsely claimed had said he couldn’t be believed unless he’d written it down (which, incidentally, Abbott had actually done in this case).

And what of Fran Kelly? She fancies herself as someone who is pretty well informed on global warming, which she, too, spruiks.

But to Bongiorno’s false claims she offered not a word of demurral.

Astonishingly, the Fairfax reporter is also astonished by Abbott’s claim, finding it so remarkable that she leads her report with it:

Tony Abbott says voters should beware the science of climate change but argues that higher temperatures “might even be beneficial” because “far more people die in cold snaps”.

Lancet reports that more people die in the cold than the heat and Fairfax doesn’t blink. But when Abbott says it Fairfax faints.

“I don’t have much patience for people who deny climate change”
– Barack Obama,
US President

“I hope there are no climate-change deniers in the Department of Interior.“
– Sally Jewell, U.S. Interior Secretary 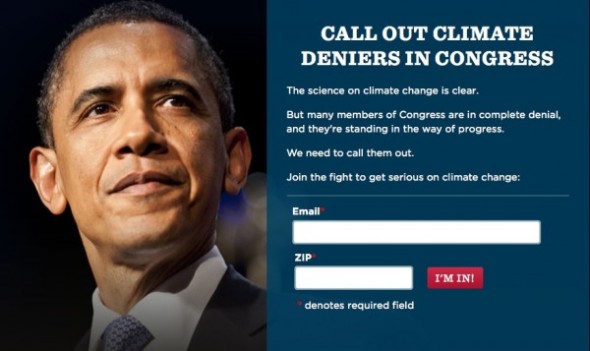 A common fallback position when losing an argument is to assault your adversary personally. Known as ad hominem, it involves “attacking an opponent’s motives or character rather than the policy or position they maintain.”

In climate science, those who employ this rhetorical tactic attack individuals who ask probing scientific questions. The attacks indicate that they know how inadequate their science is. It often works because of a deliberate campaign to exploit basic sensitivities: fear the sky is falling, guilt about not protecting the environment, guilt about the damage already done, fear and embarrassment of showing ignorance.

People who challenge the claims of the Intergovernmental Panel on Climate Change (IPCC) are often labeled “global warming skeptics”. Skeptics do not deny that warming occurred in modern times, but, sensibly, questioned the cause. The IPCC said it was due to human production of CO2. This is driven by a political agenda, not science, so any opposition is considered troublesome and requires silencing.

The IPCC claim is an unproven hypothesis. Science advances by proposing hypotheses that other scientists challenge in their proper role as skeptics. The word skeptic has markedly different public and scientific connotation; negative for the former and positive for the latter. Scientists act as skeptics by trying to disprove the hypothesis. Global warming skeptics are acting appropriately. (Dr Tim Ball, WUWT)

Pierre Gosselin at NoTricksZone has discovered a rather concerning example of a “denier” strike, endorsed by one of Germany’s most respected research centres, the prestigious Helmholtz Center Geesthacht…

It’s worrisome enough that the German government itself recently issued a brochure singling out, naming, and defaming German and American climate science skeptics. Today we have one of Germany’s most prestigious science associations actively backing adolescent-level attacks on skeptics who have decided not to take part in collective climate hysteria.

The above tweet comes from the Climate Service Center, which provides a link to an intolerant video called “The League of Deniers“, which was produced by Kickstarter.com. In summary the video portrays skeptics as “deniers”, claims that ”the public is misinformed” and that skeptics’ words are “human foolishness”.

Gosselin posts a series of basic climate questions that identify, not what sceptics deny, but rather what the promoters of CAGW continually fail and refuse to answer :

To help them understand why there are skeptics when it comes to climate science, below are some questions that us skeptics have been waiting 15 years to receive answers.

Perhaps instead of wasting taxpayer resources on sophomorically defaming and ridiculing those who legitimately ask questions, the Helmholtz Center ought to focus on providing some clear answers for the above questions for once.

Yeah, somebody pushed my button.

When politicians and scientists started calling people like me “deniers”, they crossed the line. They are still doing it.

They indirectly equate (1) the skeptics’ view that global warming is not necessarily all manmade nor a serious problem, with (2) the denial that the Nazi’s extermination of millions of Jews ever happened.

Too many of us for too long have ignored the repulsive, extremist nature of the comparison. It’s time to push back.

The pseudo-scientific ramblings by their leaders have falsely warned of mass starvation, ecological collapse, agricultural collapse, overpopulation…all so that the masses would support their radical policies. Policies that would not voluntarily be supported by a majority of freedom-loving people.

They are just as guilty as the person who cries “fire!” in a crowded theater when no fire exists. Except they threaten the lives of millions of people in the process.

Like the Nazis, they advocate the supreme authority of the state (fascism), which in turn supports their scientific research to support their cause (in the 1930s, it was superiority of the white race).

Dissenting scientific views are now jack-booted through tactics like pressuring scientific journals to not publish papers with which they disagree…even getting journal editors to resign.

Like the Nazis, they are anti-capitalist. They are willing to sacrifice millions of lives of poor people at the altar of radical environmentalism, advocating expensive energy policies that increase poverty. And if there is a historically demonstrable threat to humanity, it is poverty.

Time to push back against the global warming Nazis « Roy Spencer, PhD

What has become of society, and science, when one of the core principles of the scientific method – the ability to question it – is met with “Nazi” totalitarian hostility?

The inference ‘eco-fascism’ not too far from the truth at all.

Climate Service Center (CSC) has removed “The League Of Deniers” video link from their webpage.

Readers here will know that my problem with the term “denial” is with its misuse in English*. But the term “denier” is also used as a character slur to mark those who disagree in a science debate as being as odious as Holocaust deniers. The hope, apparently, is that dissenting views should be shunned and their arguments and evidence ignored. It’s a cheap debating tactic to shut down debate for those without evidence and reason, but it’s incredibly effective if you have the media on your side. What’s amazing is how many otherwise smart people don’t see through this babyish rhetorical stunt.

Last week Roy Spencer had had enough. In response to years of name-calling, he  protested at being called a “denier” and said

“Too many of us for too long have ignored the repulsive, extremist nature of the comparison. It’s time to push back.  I’m now going to start calling these people “global warming Nazis”.