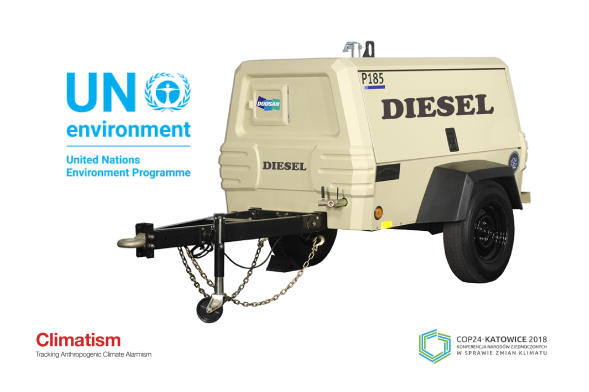 ISN’T the latest COP 24 climate junket in Poland, with 22,771 taxpayer funded, jet-setting delegates in attendance, the PERFECT event to showcase the wonders of 100% UNreliables – wind and solar?

WHY then is the latest UN “Save The Planet” climate change conference 100% powered by “dirty” fossil fuels?

ON the ground with The Rebel Media :

It’s another United Nations Climate Change Conference and you know what that means! Plenty of fossil fuels are being used to keep the fancy dignitaries comfortable.

At my first climate change conference in Morocco, the desert conference was air conditioned and cool despite the Moroccan sun outside.

Last year in Bonn Germany, we followed a tangle of power cords back to find the diesel generators powering the conference on the Rhine River banks.

This year is no different. Fossil fuels have a starring role in Katowice, Poland.

We found the army of frost fighter diesel heaters — the kind seen everyday in the oil patch — being used to keep everyone snuggly and warm inside the conference as the snow falls outside.

DIESEL TO THE RESCUE!

DIESEL has become the petrochemical substance of choice for ‘Green’ energy zealots acting as cover for the unreliability of their hallowed ‘clean’ energy devices:

DIESEL – Keeping South Australia’s Lights On Til The Next Election! | Climatism 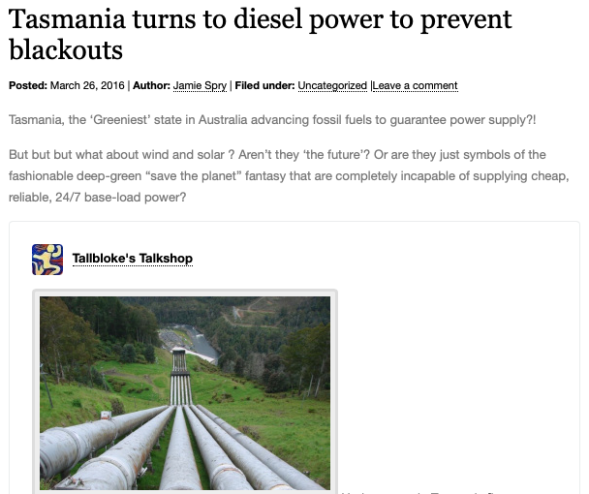 THE ‘green’ energy madness that threatens our ability to turn on the lights and heating further exposed as an ineffective, socialist policy-driven, big government debacle, right at ground zero of ‘renewable energy’ cheerleading – the UN climate conference!

END_OF_DOCUMENT_TOKEN_TO_BE_REPLACED

““Do as I say, but don’t pay attention to what I actually do” is the trademark of climate change policy. The Trump administration took a different approach and told it like it is: Paris is a costly, meaningless non-solution.”

Climate hypocrisy is nothing new.

Celebrities cruise around the world in their private jets, eating filet mignon while telling you to pack a salad and bike to work to reduce your carbon footprint.

So, color me not at all surprised that Germany, a vocal critic of the U.S.’ decision to exit the Paris climate accord, is preparing to abandon its 2020 climate targets.

Strong economic growth is a critical reason why Germany is very likely to miss its target.

A leaked document from Germany’s Environmental Ministry projected the country will miss its carbon emissions goal under the Paris climate accords by 8 percent without additional action. (Photo: iStock Photos)

Germany has an aggressive plan to cut its greenhouse gas emissions 40 percent below 1990 levels by the year 2020. Last November, a leaked document from the country’s Environmental Ministry projected the country would miss the…

Bureaucratic elitist hypocrites using other-people’s-money to fund their lavish ‘carbon’ intensive gabfests to protest against ‘carbon’, demanding everyone else curb their lifestyles.

You can’t make this stuff up. 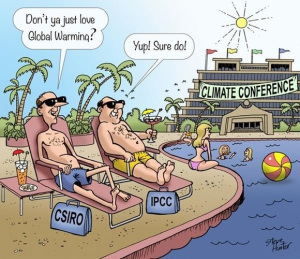 For at least 21 years now, the U.N. and the IPCC have been ringmaster to a troupe of thousands. They perform at massive annual conferences held in exotic locations, serviced by top hotels and airlines, and funded largely, directly or indirectly, by reluctant taxpayers.

An estimated 45,000 attendees, including 114 from the Australian government, achieved nothing useful at Copenhagen and just more green tape in Paris. Each of these climate-fests is preceded by numerous meetings of bureaucrats drafting and redrafting their wish lists.

Now the U.N. Climateer-in-Chief, Ban Ki-moon, has jetted into the G20 summit in China to claim climate victory over climate skeptics.

Is there no end to this energy-wasting climate tourism? If they believe that the science is settled, no more conferences are needed.

How to Wreck Landscapes for Eternity: Just Add Wind Turbines

“Environmentalists” would, in times past, raise the alarm at obstructions being built by the thousands across the land, but today the “Socio-Enviro-Emotionalists” salivate at the site of these rising monsters, believing they are “saving the planet.”

Duane Hyland, 82, of Golden, Colorado is a retired software engineer who, horrified at what the wind industry has done to America’s Mid-West, penned a pretty solid warning to all-comers: “Steal the Wind Reap the Whirlwind.”

Here’s the thrust of Duane’s call to arms.

South Dakota residents should think carefully before agreeing to give up tax revenue for the privilege of having their landscapes marred by thousands of massive mechanical machines and hundreds of miles of new transmission lines.

I am from Colorado, but I have spent hundreds of hours driving through S.D., while commuting from Denver to southern Minnesota between 2007 and the present.

Rather than traveling east on I-80 and north on I-35, I always chose to travel north on Hwy. 83 from North Platte through the Sand Hills up to… 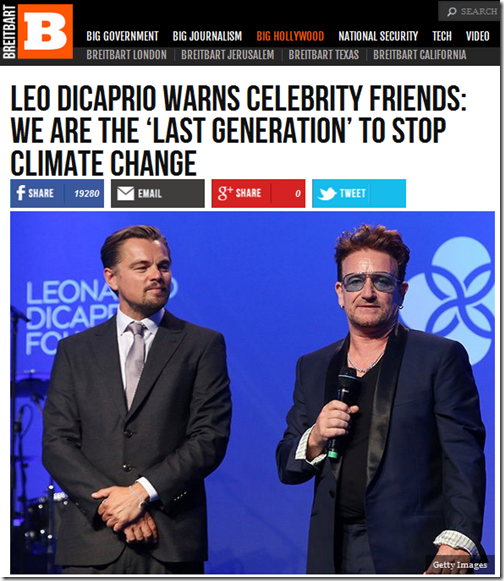 What matters is seeming green, not actually doing it. 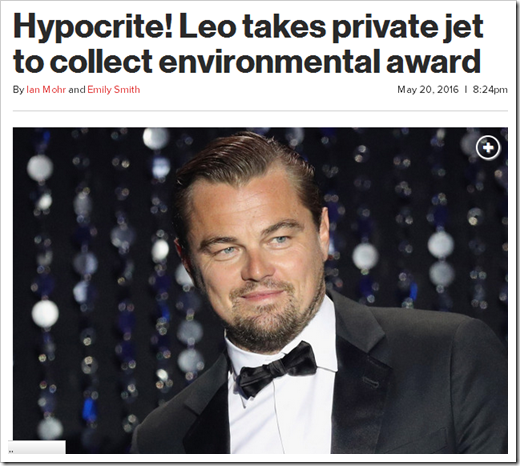 Leo DiCaprio picked up an environmental award in NYC this week — but hypocritically expanded his carbon footprint by 8,000 miles when he obtained the honor, by taking a private jet from Cannes, then flying straight back to France on another jet for a model-packed fund-raiser a night later.

DiCaprio was at the Cannes Film Festival this week, and was spotted there partying at club Gotha on Monday with model Georgia Fowler, then jetted back to New York for the Riverkeeper Fishermen’s Ball at Chelsea Piers on Wednesday, where he was honored by the clean-water advocacy group and Robert De Niro.

Just 24 hours later, DiCaprio reappeared back in France for amfAR’s glitzy Cinema Against AIDS gala, where he gave a speech.

Ship of Hypocrites: Burn Some Carbon With Tim Flannery 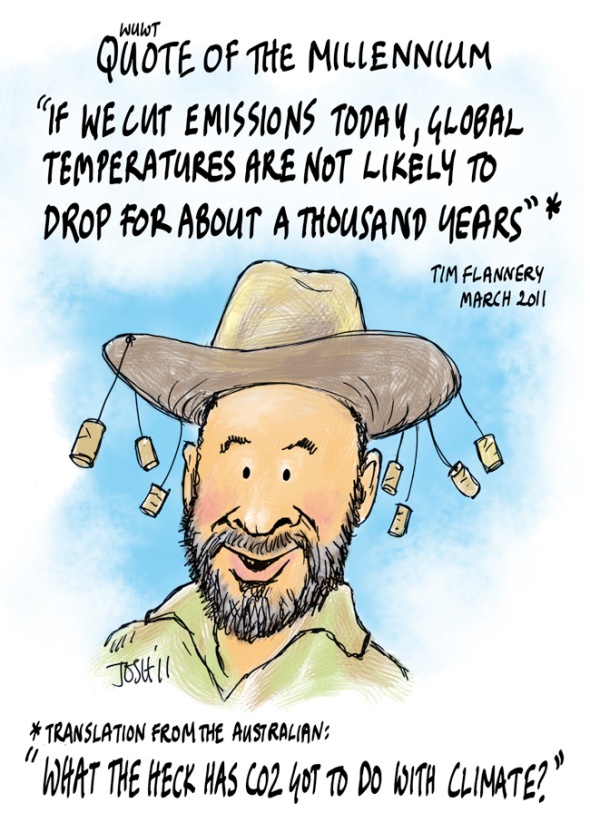 From Two Men in a Tinnie to this Ship of Fools. Climate catastrophist, Professor Tim Flannery has awarded himself an upgrade!

No, not a parody. The Climate Council really has invited Australian warmists to spend more than $7500 for a luxury cruise, gassing with Tim Flannery:

As part of this adventure, you will join renowned scientist and former Australian of the Year, Professor Tim Flannery – the Climate Council’s Chief Councillor – on the adventure of a lifetime along the remote Kimberley coast…

Best of all, by taking part in this expedition, you’ll be stepping up to help provide Australians with a vital source of correct and informed information on climate change…

Plus more gassy extras, none solar-powered:

Taxpayers have forked out ­almost $13,000 for South Australian Premier Jay Weatherill, his department’s chief executive and two political staffers to stay in a five-star hotel for the Paris climate change talks in December.

This comes after taxpayers outlaid more than $185,500 for a private film crew to follow the Labor Premier on two overseas trips, including to Paris, to produce promotional videos.

Government figures showed it cost about $53,600 for two people from Adelaide company 57 Films to follow Mr Weatherill on the Paris trip. 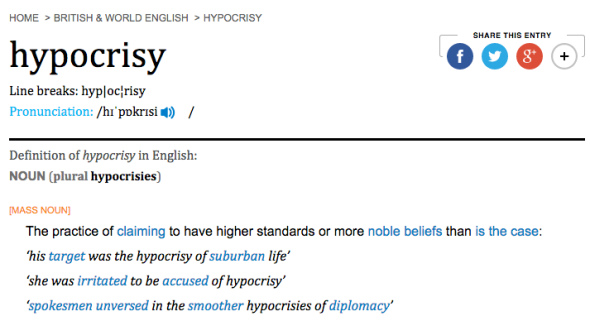 Climate Change hypocrisy at its finest at COP20 (and counting) via U.S.News.com :

LIMA, Peru (AP) — The current U.N. climate talks will be the first to neutralize all the greenhouse gas pollution they generate, offset by host country Peru’s protection of forest at three different reserves, organizers say.

Now the bad news: The Lima conference is expected to have the biggest carbon footprint of any U.N. climate meeting measured to date.

At more than 50,000 metric tons of carfb/phbon dioxide, the negotiations’ burden on global warming will be about 1 1/2 times the norm, said Jorge Alvarez, project coordinator for the U.N. Development Program.

The venue is one big reason. It had to be built.

Eleven football fields of temporary structures arose for the 13-day negotiations from what three months ago was an empty field behind Peru’s army’s headquarters. Concrete was laid, plumbing installed, components flown in from as far as France and Brazil.

Standing in the midday sun here can get downright uncomfortable, but the Lima sun is not reliable. That’s one reason solar panels were not used.

For electricity, the talks are relying exclusively on diesel generators.

Organizers had planned to draw power from Peru’s grid, which is about 52 percent fed by non-polluting hydroelectric power. “We worked to upgrade transformers and generators but for some reason it didn’t work,” said Alvarez.

Peru’s hydroelectric power could be in danger by mid-century, anyway. Much of that water comes from glaciers that are melting at an accelerated pace. Peru is hardly on a green trajectory. Though it emits in a year the greenhouse gases that China spews in three days it has doubled its carbon output in the past decade.

Nor is there a guarantee that the 580 square miles (1,500 square kilometers) of forest — the size of Houston, Texas — offsetting the talks’ carbon pollution won’t someday be gone. It must lie unperturbed for a half century in order to neutralize carbon emitted at the conference.

—Construction, nearly 20 percent of the footprint.

—Jet fuel burned by the estimated 11,000 delegates and observers who flew in from abroad. About 30 percent.

—Local transportation. Organizers hired more than 300 buses since there are no public transit services to the venue. All burn fossil fuels. About 15-20 percent.