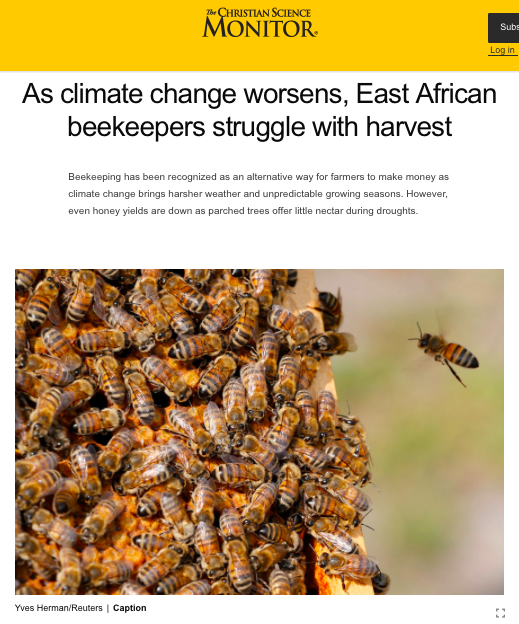 “Beekeeping is being widely introduced to communities in East Africa as an alternative way of making money as climate change brings harsher weather.

But Ng’ong’oni’s said even the bees are struggling to deal with drought and worsening heat extremes, despite his having planted a woodlot of trees to help provide nectar.

Benedict Wambua, a researcher at South Eastern Kenya University’s school of agriculture and veterinary sciences, found in a 2016 study that recurrent droughts were among the factors limiting the use of beekeeping as a climate coping strategy, largely because honey production fell in drought periods.

The area he and colleagues studied in Kitui County, in eastern Kenya, “showed a notable decline in productivity attributed to drought, deforestation and inefficiency” by farmers, the study said…”

“Deforestation and inefficiency by farmers”, is most definitely a man-made issue, but as for “drought”, science points to Mother Nature as the cause. An important variable conveniently left out by The Christian Science Monitor, always partial to pushing the climate change scare.

BIAS BY OMISSION – the most insidious form of propaganda…

“Analysing precipitation data for the South East and North West of Kenya we found no consistent signal from human‐induced climate change and thus conclude that it has not greatly affected the likelihood of low rainfall such as in 2016.”

WHAT other pieces of vital information do climate-theory-obsessed mainstream media outlets omit in order to deceive their readers into man-made climate change belief?

CLIMATE alarmism’s primary objective is to scare you and policy makers into belief such that your taxes are effortlessly diverted, with little to no scrutiny, into research grants and green schemes and scams to supposedly stop bad weather by changing the temperature of the planet. Yet, no one can ever tell you by how much the temperature will change for each dollar spent. But alas, “Saving The Planet” is far more important than how your hard-earned money is spent, right?

CLIMATE research is paid for by you in the form of government grants. And, thanks to the system of  peer-review, the most scary studies, prefaced by “anthropogenic” are given the green light, published in science journals with results interpreted by the compliant mainstream media and delivered back to you, to scare you even more such that you will happily donate more money to research.

A google search with key words [climate research + climate change worse than we thought] illustrates 1,960,000 times in 0.45 seconds the effect that monopolistic or one-way funding has on published results…