Climate Change : Who Are The Real Science ‘Deniers’?

EARLIER today I reported on Sydney’s Autumn 38 degree Sun-day, noting that “the usual climate ambulance chasers will be sharpening the lead and filling ink wells to inscribe “” “global warming” on their “extreme weather” report cards, feeling morally-bound to fashionably link mankind’s activities to the follies of nature.”

END_OF_DOCUMENT_TOKEN_TO_BE_REPLACED

SYDNEY Autumn Heatwaves Are Not Uncommon

WITH the mercury topping 38C in Sydney over the weekend (hottest in 78 years), the usual climate ambulance chasers will be sharpening the lead and filling ink wells to inscribe  “global warming” on their “extreme weather” report cards, feeling morally-bound to fashionably link mankind’s activities to the follies of nature.

HOWEVER, heatwaves and fires in Sydney during autumn months are not uncommon, even when CO2 was at ‘safe’ levels… 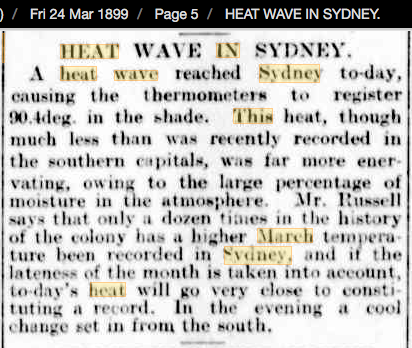 A heat wave reaced Sydney to-day, causing the thermometers to register 90.4deg. in the shade. This heat, though much less than was recently recorded in the southern capitals, was far more enervating, owing to the huge percentage of moisture in the atmosphere. Mr. Russell says that only a dozen times in the history of the colony has a higher March temperature been recorded in Sydney, and if the lateness of the month is taken into account, to-day’s heat will go very close to constituting a record. In the evening a cool change set in from the south.
24 Mar 1899 – HEAT WAVE IN SYDNEY. – Trove

END_OF_DOCUMENT_TOKEN_TO_BE_REPLACED

167 Years Ago Today : Bushfires Burn 5 Million Hectares or A Quarter Of Victoria

The Black Thursday bushfires were a devastating series of fires that swept through Victoria on February 6, 1851. They are considered the largest Australian bushfires in a populous region in recorded history, with approximately 5 million hectares, or a quarter of Victoria, being burnt. Twelve lives were lost, along with one million sheep and thousands of cattle.

The year preceding the fires was exceptionally hot and dry and this trend continued into the summer of 1851. On Black Thursday, a northerly wind set in early and the temperature in Melbourne was reported to have peaked at 47.2 degrees C (117 degrees F) at 11:00am.

“The temperature became torrid, and on the morning of the 6th of February 1851, the air which blew down from the north resembled the breath of a furnace. A fierce wind arose, gathering strength and velocity from hour to hour, until about noon it blew with the violence of a tornado. By some inexplicable means it wrapped the whole country in a sheet of flame — fierce, awful, and irresistible.” (Wikipedia / Climatism bolds).

THEY tell you this because the ultimate prize of the eco-activist is the control of carbon dioxide (energy). Virtually every human activity, including breathing, releases carbon dioxide. Consequently, greenhouse gases have become weaponised through the fear of “catastrophic climate change” in the “sustainability” (sic) effort to control all aspects of your life.

Top post. Nice work Paul.
WMO, up to their ears in man-made “Global Warming” hysteria and alarmism since they teamed up with climate criminal Maurice Strong’s UNEP in the 1970’s, later implementing the eco-political UN IPCC.

From the “A bit of bad weather proves climate change “ Dept.

An unbelievably crass piece from the failed Independent (and doubtlessly the BBC and the rest of the dismal MSM):

There is “no room for doubt”. The astonishing weather experienced by the world last year and advances in climate science demonstrate conclusively that fossil fuel emissions are causing global warming – and something must be done about it.

That was the reaction from scientist after scientist to a new report by the World Meteorological Organisation (WMO), which documented record-breaking droughts, heatwaves, rainfall, melting of sea ice and a host of tangible signs observed in 2016 that the Earth’s climate has changed. 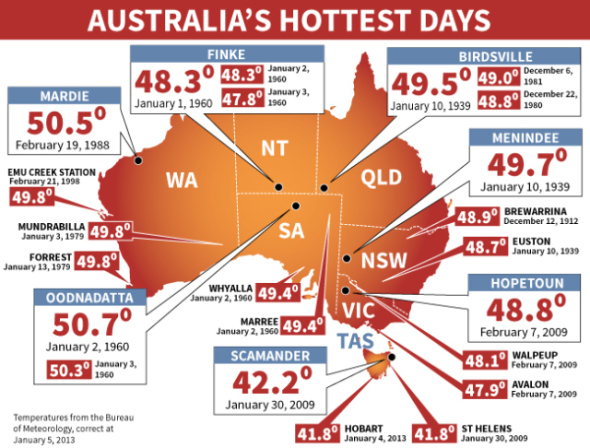 Bureau of Meteorology senior forecaster Matt Collopy said that “four days greater than a record of 40C in Adelaide has never happened in December since records began in 1887”.

Adelaide heatwave forecast for December 2015: Four days over 40C on its way | AdelaideNow

ADELAIDE, Dec. 31. — Today was the seventh consecutive day in which the temperature went over the century. The maximum today was 103.4 degrees (40 degrees C). Seven days with the thermometer over 100 degrees is easily a record for December but is two days short of the record for months other than December; for in January ,1858, and again in February and March, 1872, there were nine days in succession in which the glass recorded the century. The “weather man” said to-day that he expected the conditions to get worse before they got better.

“Carbon Pollution” concentration at the time was 310 parts per million. CO2 levels today are around 400ppm.

NOAA Is Getting Bolder And Bolder With Their Climate Fraud

Further merit to the term “pal-review” which has sadly become common-speak in reference to the corrupt world of anthropogenic climate science. The US weather Bureau reported exactly the same thing in 1922. Seals disappearing and fish being forced northwards. However, in 1922 the reported warming was much larger than 2.3 degrees. In 1947, scientists reported 10 degrees Arctic warming, much more than the 2.3 degrees reported by Rick Spinrad.

Glaciers were disappearing from Alaska to Norway.

The sea ice maximum occurred at the end of March, not February 25 as Spinrad claimed, and extent is the highest since at least 2004, not the “lowest on record”