“This urgent, must-see movie,
a full-frontal assault on our sacred cows,
is guaranteed to generate anger, debate.”

IT gets going at around the 13 minute mark, and then, kaboom…

THE Ministry Of Truth has now removed Michael Moore’s original #YouTube release of #PlanetOfTheHumans. It was tracking some 10 million views when shut-down/censored due to a “copyright claim”.

THE complainant, Toby Smith, explains why he is not filled with the obligatory totalitarian streak of the muzzle-ready Leftist …

“I went directly to YouTube rather than approaching the filmmakers because I wasn’t interested in negotiation. I don’t support the documentary, I don’t agree with its message and I don’t like the misleading use of facts in its narrative.”

SUSAN does not trust your judgment or you ability to think for yourself.

Paul Homewood comments, “Regardless of the so-called copyright issues, this is clearly a politically motivated attempt to censor the film, as Toby Smith himself admits.” 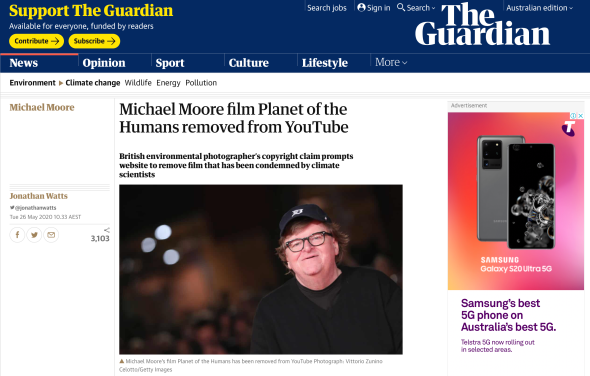 YOU can find the video here on D.Tube :