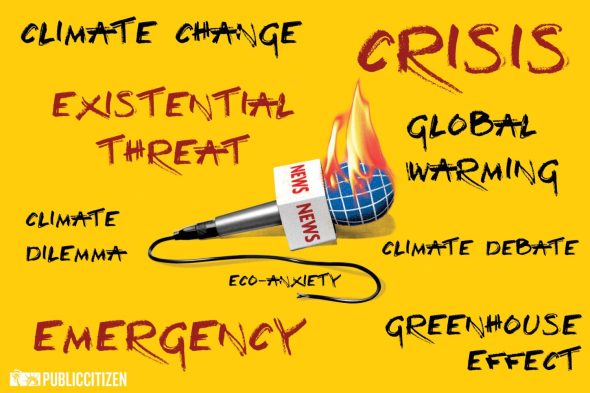 Calling It a Crisis and Covering It Like One – Public Citizen

“PEOPLE have been imagining that the climate is changing,
exaggerating every weather event, getting widespread press coverage,
and blaming it on man – for as long as there have been newspapers.”
– Tony Heller
Climate Change Insanity Never Changes

DEEP within human nature there are certain types of people who yearn for catastrophe. They yearn to have significance in their lives believing that theirs is the time when the chickens are coming home to roost and everything is going to go tits up.

THE biggest selling environmental books in history, predict the mass destruction of the planet. Rachel Carson’s 1962 international bestseller “Silent Spring” predicted mass cancer from plant pesticides and DDT. Population freak, Paul Ehrlich’s 1968 book “The Population Bomb”, argued on Malthusian lines that population explosion would mean mass starvation around the world. People buy this stuff. They lap it up and books like this sell in droves, in a way that more reasonable books that say “hang on, lets look at the facts”, don’t.

MORE than half a century on, we still ‘yearn for catastrophe’. The perpetrator, still, ‘evil’ mankind.

“The Earth has cancer
and the cancer is Man.”
– Club of Rome
(Eco consultants to the U.N.)

THIS time around; “Climate Catastrophe, “Climate Armageddon”, “Climate Crisis”, “Climate Emergency” and every other hyperbolic descriptor of climate and weather are all blamed on mankind’s excesses, chiefly its production of trace gas carbon dioxide – the byproduct of around ninety per cent of all global energy production.

LINDZEN’s enlightening summary goes to the very heart of why Carbon Dioxide has become the centre-piece of the ‘global’ climate debate :

WITH a clearer understanding of why colourless, odourless, trace gas and plant-food carbon dioxide is demonised as “carbon pollution” by the zero-emissions-zealots, let’s wind back the clock to gain some historical perspective into the relentless bombardment of “Hottest Evahh” and “unprecedented” hyperbole that dominates the lexicon of the lazy mainstream media, deliberately fanning the flames of  ClimateChange™️ hysteria. 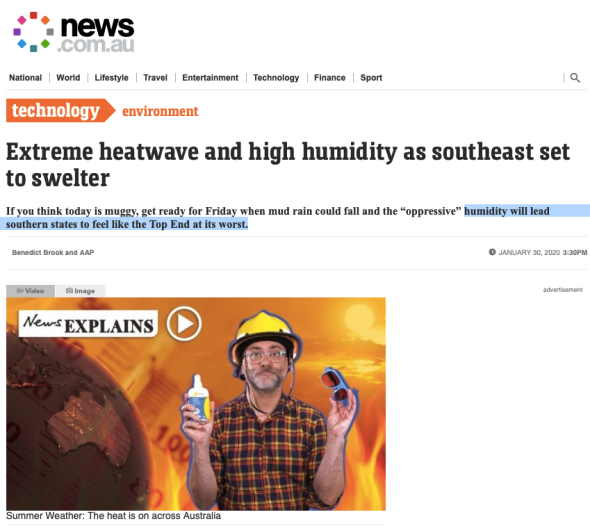 Heatwave – Humidity so bad in Melbourne it will feel more like Darwin | NEWS.com

NOTE to news.com.au author : Australia’s Bureau of Meteorology defines a “heatwave” as “unusually hot conditions over a period of four days.”

WHAT is even more astonishing is that the extreme month of heat was split into two mega-heatwaves lasting six days for the first and seven days for the second.

A cool change separated the two, though this would have brought little comfort to the population who endured the extended heatwaves without the luxury of AC!

THERE was little respite in February with another four-day heatwave delivering temps again over 100°F.

WITH current global CO₂ levels pushing an “unprecedented” (blah, blah…) 411 ppm it would track that heatwaves should be longer and hotter during the hottest month of the Australian year – January – and temps significantly higher. That is if CO₂ is doing its job properly.

UNFORTUNATELY for ClimateChange™️ “doomers” Adelaide max temps have been well below average for January with only three days above 38°C (101.9°F) and no consecutive days of ‘heatwave’.

MELBOURNE has been about average for January. With only two days above 38°C (101.9°F)

ONE angry responder noted, “Wow so you presented two data points & drew a conclusion! Very scientific- did u get a science degree from a cornflakes packet???”.

Wow so you presented two data points & drew a conclusion! Very scientific- did u get a science degree from a cornflakes packet??? 🤦‍♀️

HOWEVER, just imagine if any capital city in the world, today, had two consecutive heatwaves in one month – with one lasting six days and the other, seven days with temps averaging  42°C (107.3°F) ?

THE mainstream media would have apoplexy, and @alison_rixon along with her Extinction Rebellion mates and GretaThunberg™️ in tow would be glueing themselves to the nearest sidewalk, demanding big employers be shut down, whilst pleading for global communism in order to stop the “CLIMATE CRISIS!”.

“The study of History
is the beginning of wisdom.”
— Jean Bodin

AN area of great success for climate change realists, in the process of hitting back against dangerous and costly ClimateChange™️ alarmism and mainstream media eco-hysteria has been in the area of historical referencing. Comparing past climate and weather events to present ones.

CLIMATE sceptics are denounced as “deniers” for daring to use the past to nullify hysterical claims of the present or even the modelled future. ‘How dare’ anyone refute claims by ‘leading scientists’ that current conditions are “unprecedented”!

THE master of historical referencing has ‘historically’ been @Tony Heller aka Steve Goddard over at Real Climate Science. I urge you to checkout his excellent and powerful work. You will even get a good laugh, too! A very clever scientist, environmentalist and humanitarian.

YE shall know the truth and the truth shall make you [and your power bills] free.