TOP CLIMATE SCIENTIST : ‘Carbon Dioxide Is Not A Control Knob For The Climate’

“WE need to get some broad based support,
to capture the public’s imagination…
So we have to offer up scary scenarios,
make simplified, dramatic statements
and make little mention of any doubts…
Each of us has to decide what the right balance
is between being effective and being honest.“
– Prof. Stephen Schneider,
Stanford Professor of Climatology,
lead author of many IPCC reports

JUDITH CURRY is one of the world’s leading climate scientists. Unlike our politicians, she doesn’t think there’s much point to slashing emissions: 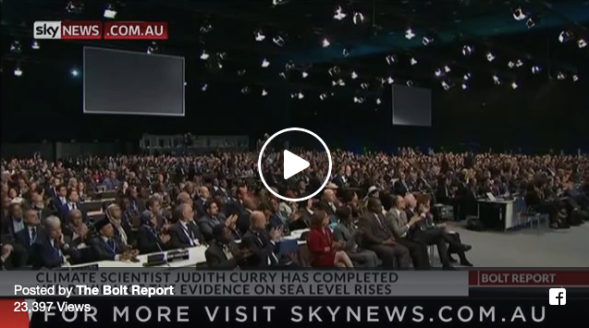 CURRY – “thinking that we can really control the climate by dialling down the CO2 emissions is really misguided hubris.”

“I don’t think that even if we had the political will we could do very much to change the climate. Carbon dioxide is not a control knob for the climate. It has some effect on very long time scales but it is nothing you can really dial up or down on the time scale of a century and change the climate. There’s a lot of natural forces in play here that determine the climate and thinking that we can really control the climate by dialling down the CO2 emissions is really misguided hubris.” – Judith Curry PhD

WHY THEN IS “CARBON DIOXIDE” (or as climate zealots deceitfully label it – “Carbon Pollution”) THE KEY INGREDIENT OF THEORISED MAN-MADE “CLIMATE CHANGE”?

LIKE with all Socialistic edicts, the answer is absolute power and control over you and your lifestyle.

“FOR a lot of people including the bureaucracy in Government and the environmental movement, the issue is power. It’s hard to imagine a better leverage point than carbon dioxide to assume control over a society. It’s essential to the production of energy, it’s essential to breathing. If you demonise it and gain control over it, you so-to-speak, control everything. That’s attractive to people. It’s been openly stated for over forty years that one should try to use this issue for a variety of purposes, ranging from North/South redistribution, to energy independence, to God knows what…” – Richard S. Lindzen

“CO2 for different people has different attractions. After all, what is it? – it’s not a pollutant, it’s a product of every living creature’s breathing, it’s the product of all plant respiration, it is essential for plant life and photosynthesis, it’s a product of all industrial burning, it’s a product of driving – I mean, if you ever wanted a leverage point to control everything from exhalation to driving, this would be a dream. So it has a kind of fundamental attractiveness to bureaucratic mentality.” – Richard S. Lindzen

IN a MUST WATCH 5 minutes, Lindzen examines the science, politics and ideology behind the global warming scam, identifying key lobby groups who drive the fear, alarmism and groupthink that dominates debate over objective science and reason.

Climate change is an urgent topic of discussion among politicians, journalists and celebrities…but what do scientists say about climate change? Does the data validate those who say humans are causing the earth to catastrophically warm? Richard Lindzen, an MIT atmospheric physicist and one of the world’s leading climatologists, summarizes the science behind climate change.

One Comment on “TOP CLIMATE SCIENTIST : ‘Carbon Dioxide Is Not A Control Knob For The Climate’”