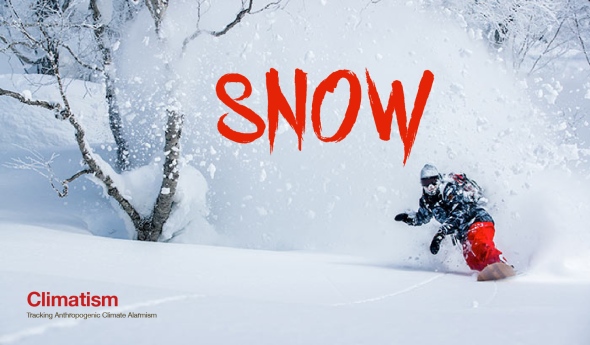 THE problem with lying or perpetuating a scam is that you have to be aware of the spin you’ve spun to get you there.

IN the realm of climate and weather, you pray to god (or Gaia) that the prognostications and rules, as laid out by the “97%” of ‘experts’, come to fruition or go close enough to bolster your alarmist position.

CLIMATE and weather outcomes vary greatly, depending on many factors, most of which we are yet to fully understand. Perhaps if ever, owing to the fact that “The climate system is a coupled non-linear chaotic system, and therefore the long-term prediction of future climate states is not possible.” (IPCC TAR 2001)

WITH that in mind, it is feasible and encouraged to identify errors in predictions. From this we can identify uncertainty in order to sharpen hypothesis and curb costly hysteria.

A good example of climate predictions gone awry is in the area of snow.

IN 2000, climate expert Dr David Viner of the University of East Anglia’s Climate Research Unit (CRU) assured us that :

SNOWFALL Will Become “A Very Rare And Exciting Event…” | Climatism

IN 2001, the UN IPCC predicted diminished snowfalls as human CO2 increased, claiming that “milder winter temperatures will decrease heavy snowstorms” due to the activities of personkind…

THEY also forecast “warmer winters and fewer cold spells, because of climate change…”

“Winters with strong frosts and lots of snow like we had 20 years ago will no longer exist at our latitudes.” – Professor Mojib Latif

“Snow has become so rare that when it does fall – often just for a few hours – everything grinds to a halt. In early 2003 a ‘mighty’ five-centimetre snowfall in southeast England caused such severe traffic jams that many motorists had to stay in their cars overnight. Today’s kids are missing out . . . Many of these changes are already underway, but have been accelerating over the last two decades. Termites have already moved into southern England. Garden centres are beginning to stock exotic sub-tropical species, which only a few years ago would have been killed off by winter…” – Mark Lynas

Planning for a snowless future: “Our study is already showing that that there will be a much worse situation in 20 years.”

Winter is no longer the great grey longing of my childhood. The freezes this country suffered in 1982 and 1963 are – unless the Gulf Stream stops – unlikely to recur. Our summers will be long and warm. Across most of the upper northern hemisphere, climate change, so far, has been kind to us…

“Yesterday’s snow… Because temperatures in the Alps are rising quickly, there will be more precipitation in many places. But because it will rain more often than it snows, this will be bad news for tourists. For many ski lifts this means the end of business.”

Less Snow and Drier Summers in German Forecast | Germany| News and in-depth reporting from Berlin and beyond | DW | 30.04.2006

2006 : The Independent‘s somber editorial admonished us that the lack of snow was evidence of a “dangerous seasonal disorder”…

The countryside is looking rather peculiar this winter. It seems we have a number of unexpected guests for Christmas. Dragonflies, bumblebees and red admiral butterflies, which would normally be killed off by the frost, can still be seen in some parts of the country . . . Some might be tempted to welcome this late blossoming of the natural world as a delightful diversion from the bleakness of this time of year. But these fluctuations should be cause for concern because it is overwhelmingly likely that they are a consequence of global warming . . . all this is also evidence that global warming is occurring at a faster rate than many imagined…

“It Seems the Winters of Our Youth are Unlikely to Return” presenter Richard Hollingham … speaks to climate scientists to get their views. Their conclusion? In the words of the BBC, they all give “predictions of warmer winters, for UK & the Northern Hemisphere”.

“Ice, snow, and frost will disappear, i.e. milder winters” … “Unusually warm winters without snow and ice are now being viewed by many as signs of climate change.”

Former head of the Met Office Sir John Houghton, who is one of the UK’s leading authorities on climate change, said all the indicators suggest snowy winters will become increasingly rare He said, “Snowlines are going up in altitude all over the world. The idea that we will get less snow is absolutely in line with what we expect from global warming.”

“First the snow disappears, and then winter.”

A study of snowfall spanning 60 years has indicated that the Alps’s entire winter sports industry could grind to a halt through lack of snow…. In some years the amount that fell was 60 per cent lower than was typical in the early 1980s, said Christoph Marty, from the Swiss Federal Institute for Snow and Avalanche Research in Davos, who analysed the records. ”I don’t believe we will see the kind of snow conditions we have experienced in past decades,” he said.

“The truth is, it is too late for all of that. Greening the ski industry is commendable, but it isn’t nearly enough. Nothing besides a national policy shift on how we create and consume energy will keep our mountains white in the winter — and slow global warming to a safe level.

This is no longer a scientific debate. It is scientific fact. The greatest fear of most climate scientists is continued complacency that leads to a series of natural climatic feedbacks…”

The End of Snow? – The New York Times

A 2003 CSIRO report, part-funded by the ski industry, found that resorts could lose a quarter of their snow within 15 years…

“For the first time, they realised that their attention should be directed to a common enemy,” says Andrew Fairley, head of the Alpine Resorts Co-ordinating Council, which advises the State Government and oversees the management of Victoria’s six snow resorts. “And that enemy is climate change.”

Like those who rely on the Great Barrier Reef, the Australian ski industry sees itself as a frontline victim of global warming. A 2003 CSIRO report, part-funded by the ski industry, found that the resorts could lose a quarter of their snow in 15 years, and half by 2050. The worst case was a 96 per cent loss of snow by mid-century.

DOES the CSIRO and “97% of all experts” still stand by their snowmageddon predictions? Or is their alarmist sophistry simply more  climate change fear-mongering based on dogma and/or overheated UN IPCC and CSIRO climate computer models?

END_OF_DOCUMENT_TOKEN_TO_BE_REPLACED

“THIS could be the largest cold-stunning event to occur in Texas history.”

AS the natural planet shifts seasons through Fall in the Northern Hemisphere and Spring in the Southern, it’s worth looking back only 9 months ago when Earth was delivering a particularly brutal cold and snowy NH winter.

NOAA does many things well and many not so. But, ironically, one of the best things it did was to act as a warming refuge for hundreds of endangered sea turtles who would have otherwise died due to extreme cold waters off the Texas/Florida Coast.

“Experts say sea turtles that become stunned by cold weather float to the surface because they’re too cold to swim. “

“According to KHOU-TV, this could be the largest cold-stunning event to occur in Texas history.”

I know what you’re now thinking and yes, I agree: It’s hard to validate the NOAA’s persistent “HOTTEST YEAR EVAHH” findings, so gleefully published in the mainstream media, when sea-turtles are actually dying by the hundreds thanks to “THE COLDEST OCEANS EVAHH”!

A completely isolated incident, yes. But, did any UN or NOAA climate model predict “dying turtles thanks to extreme cold oceans”?

An additional 200 are expected to arrive to the NOAA’s Galveston lab Friday, where they will be weighed, measured and later released back into the ocean.

Experts say sea turtles that become stunned by cold weather float to the surface because they’re too cold to swim.

A cold-stunned sea turtle may become “dehydrated because they’ve been floating on the surface for a few days,” Ben Higgins, sea turtle program manager, told KHOU-TV.

“We are the ones that push these animals to the brink of extinction, so we have an obligation to at least step in and help (and) try and restore their numbers,” Higgins said.

According to KHOU-TV, this could be the largest cold-stunning event to occur in Texas history.

Sea turtles, however, are not the only species that has been affected by cold weather. In Florida, it’s so cold that iguanas have been falling from their perchesin trees. Several residents have photographed the reptiles lying belly up on the ground.

But authorities say the iguanas are likely not dead. Most of them will thaw out if placed in the sun.

A little scepticism between the agencies who control the message on “Global Warming” would not go astray in order to restore the publics faith in (once) trusted taxpayer funded institutions who used to run on science and data, not ideology, politics and grants.

A brutal cold snap off the coast of Cape Cod in Massachusetts has led to more than 400 sea turtles freezing to death since Oct 22.

190 of the endangered Kemp’s Ridley turtles perished in just the last few of days, as a “once in a lifetime weather system” of powerful winds and freezing arctic air incapacitated the sea creatures.

The turtles were found washed ashore frozen solid on beaches in Brewster, Orleans and Eastham.

Since late October, over 400 cold-stunned turtles have been reported, according to Jennette Kerr, Communications Coordinator of the Massachusetts Audubon Society’s Wellfleet Bay Wildlife Sanctuary.

According to the Sanctuary, the first instance of turtles becoming cold stunned this season came on Oct 22.

Kerr told capecodtimes.com that she fears many more frozen turtles may wash ashore in the coming nights due to the historically low temperatures.

Sea turtles normally migrate south during the late fall and winter, but turtles being impacted by cold stuns has increased dramatically in recent years.

Kerr told the Boston Globe that there isn’t a clear reason why, but she suspected it was becoming more noticeable due to prolonged successful conservation.

I think a more likely explanation would link the deaths to the sharp drop in solar activity and the falling global average temperatures — the oceans are cooling, folks.

I had to include this at the end, as further illustration of the stranglehold on truth the ever-more-desperate MSM hopes to maintain.

Check out HuffPost Green’s laughable explanation: The warmer ocean waters of climate change entice the turtles to linger too long too far north.