← TIME To Give Up Your Phones And Gadgets, If You Care About ‘Saving The Planet’!
PARIS Accord Based on Fraud →

MEMO TO THE MEDIA : Glacier Calving Is A Natural Process

THE iceberg that recently calved off a Greenland glacier and spectacularly parked itself outside the tiny village of Innaarsuit has caused the usual mainstream media heads to explode with man-made climate change, again, lazily fingered as the culprit in order to facilitate the CAGW brainwashing process…

Satellite data indicated that it measured roughly 650 feet wide, rose almost 300 feet into the air and weighed up to 11 million tons, an expert from the Danish Meteorological Institute told DR, the Danish broadcaster. | NYTimes

THE fact that the iceberg has settled itself outside the tiny village of Innaarsuit may be of definite concern, if it decides to flip causing a tidal surge. But, to blame global warming, while not surprising from the fake news media, is dishonest to the phenomenon of glacier calving – a natural and dynamic process that’s been happening for eons.

Many glaciers terminate at oceans or freshwater lakes which results naturally[5] with the calving of large numbers of icebergs. Calving of Greenland‘s glaciers produce 12,000 to 15,000 icebergs each year alone.[6]

“It’s complicated,” she explains. “The region is clearly undergoing a lot of change but you can’t just say ‘it was the climate’. Iceberg calving is a natural process anyway. If you put more snow in at one end, it has to come out the other end as icebergs.”

The ‘monster’ iceberg: What happened next? – BBC News

THE glacier-calving process more likely reflecting the very health of a glacier.

CERTAINLY true for Greenland, from where this particular iceberg originated, where over the past 19 months more than one trillion tons of new ice has formed on the giant ice-continent’s surface.

DUE to a lot more new snow accumulating each year during the long winter, than is melting during the short summer, the surface is rapidly gaining ice, and glaciers are growing.

HOWEVER, scientists and the press (of course) report the exact opposite…

ACCORDING to the Danish Meteorological Institute (DMI) Greenland ice volume is tracking well over over 1981-2010 ‘normals’.

IN FACT the latest data suggests that the volume of ice is about to go above the mean…during high-summer! The EXACT opposite of what the lying press and complicit grant-driven ‘scientists’ are telling you…

GREENLAND’S surface is rapidly gaining ice, and the largest glaciers are growing and also expanding…

CALVING icebergs have been a summer tourist attraction for as long as there have been humans and summers!

There are rainy seasons, hurricane seasons, drought, err, seasons. So it only makes sense that iceberg season has made its way back around this year. But while those of us well below the Arctic Circle may pay no mind to the comings and goings of the giant ice mountains, the residents of Ferryland, on the east coast of Canada’s Newfoundland and Labrador province, don’t really have a choice. Set along “Iceberg Alley,” the town (population 465 as of 2011) has a giant reminder this year, in the form of the biggest iceberg the mayor has ever seen.

It’s been a busy iceberg season, which runs from spring through late summer, with nearly 620 floating behemoths spotted in the transatlantic shipping lanes so far (compared to 687 total last year). Iceberg Alley sees an onslaught of its namesake every year, as ocean currents bring broken-off Arctic ice south before the waters refreeze in the fall. This year’s spike may be thanks to sheets of ice breaking off Greenland and stronger than average counter-clockwise winds pushing icebergs father south, earlier, reports the Associated Press.

This particular iceberg has been classified as large (no kidding!) by the Canadian Ice Service, which means it’s between 151–240 feet tall and 401–670 feet long. If you’re having a hard time picturing the scale here, try to find the helicopter in the photo below. 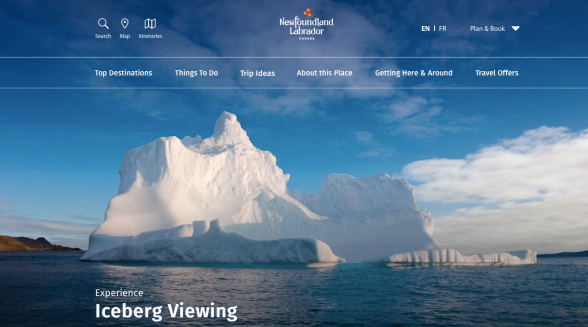 THE mainstream media will continue to exaggerate environmental stories and lie about climate change in order to drive their political agenda and protect their egos, reputations and pay checks.

One Comment on “MEMO TO THE MEDIA : Glacier Calving Is A Natural Process”