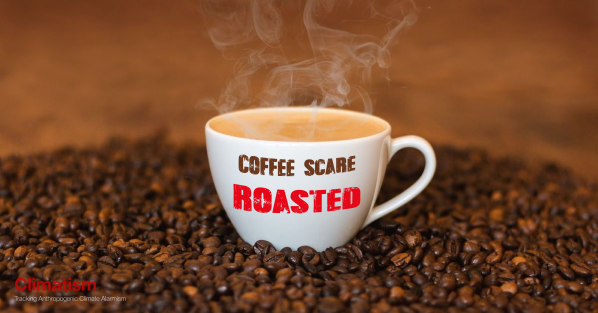 EVERYDAY brings a new scare for the Climate Crisis Industry and the mainstream media to hyperventilate over. Successful topics cover things that affect our daily lives the most in order to enhance the important emotional link between climate change and our existence.

THE threat to you daily caffeine ritual is an ideal topic to help drive home the  climate change scare.

A google search of “coffee + climate change” reveals 74,500,000 results in 0.27 seconds. Evidence of an emotional and effective tool used, and as it turns out – abused – in order to scare you into belief… 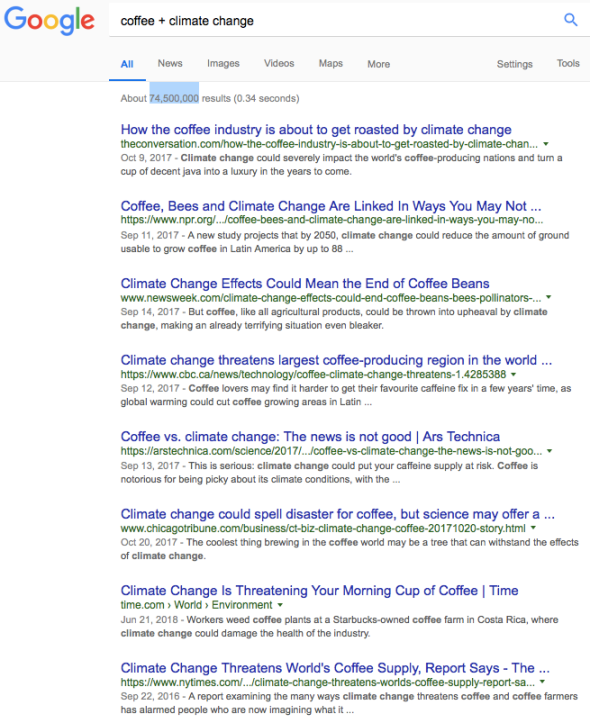 ACCORDING to the latest global production figures, the apparent coffee + climate change threat is yet another failed warming scare.

GLOBAL coffee production is soaring as Andrew Bolt correctly notes “The scare got big headlines. Will the reassuring reality now get the same?”

REMEMBER HOW COFFEE WAS ALREADY BEING WIPED OUT BY WARMING?

Another busted warming scare – that global warming would wipe out many coffee growers. In fact, that it was destroying crops already.

Global warming projections as presented by IPCC will cause a strong decrease in the coffee production in Brazil.

Shifting temperatures and erratic rainfall are taking a toll on the lucrative coffee crop in Costa Rica. Yields are way down, part of the reason coffee drinkers here are paying more for their morning cup. Climate change is also posing a threat to companies like Starbucks…

Yields in Costa Rica have dropped dramatically in the last decade, with farmers and scientists blaming climate change for a significant portion of the troubles.

The coffee berry borer (Hypothenemus hampei), the most important pest of coffee worldwide, has already benefited from the temperature rise in East Africa… This erstwhile worse case scenario is already happening, as changes in the altitudinal range of H. hampei have recently been observed in … Uganda.

But now let’s check how more than a decade of warmist scares about coffee are working out:

In Uganda, too, for all the scares of climate super-bugs destroying crops:

Latest statistics indicate that both volume and value of Uganda’s exports at the international market increased… Experts in the industry say, if this trend continues, the country’s campaign to reach the 20 million bags at least by 2025 will be achieved.

Same in Brazil and much of the rest of the world:

The benchmark arabica coffee futures contract has dropped around 9 percent in 2018 so far, … pressured by expectations for top grower Brazil to harvest a record crop and lift global supplies to a large surplus.

The scare got big headlines. Will the reassuring reality now get the same?

REMEMBER HOW COFFEE WAS ALREADY BEING WIPED OUT BY WARMING? | Herald Sun