BEFORE NASA climate was captured by radical environmentalists (Hansen/Schmidt et al) and sold their soul to the widely debunked “97% of scientists believe that CO2 is the climate control knob” groupthink virus, they knew perfectly well that the sun controlled Earth’s climate.

AND, before the new-NASA-activists rewrote climate ‘science’, the National Aeronautics Space Agency boldly (and correctly) noted that “Other important forcings of Earth’s climate system” such as “clouds, airborne particulate matter, and surface brightness [have] the capacity to exceed the warming influence of greenhouse gases and cause our world to cool.” 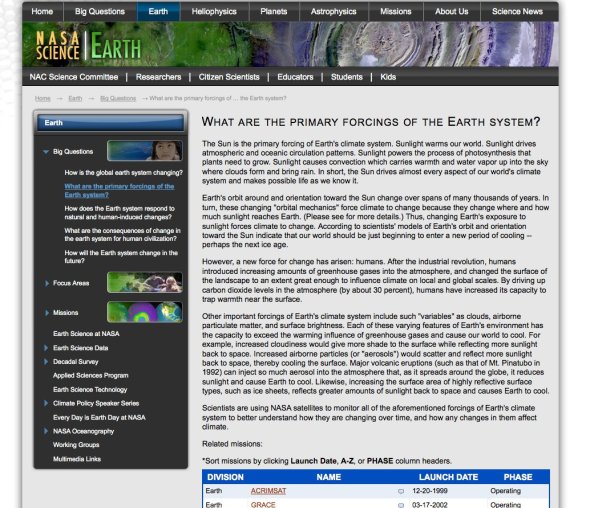 FROM the above NASA article that disappeared around 2010 :

WHAT ARE THE PRIMARY FORCINGS OF THE EARTH SYSTEM?

The Sun is the primary forcing of Earth’s climate system. Sunlight warms our world. Sunlight drives atmospheric and oceanic circulation patterns. Sunlight powers the process of photosynthesis that plants need to grow. Sunlight causes convection which carries warmth and water vapor up into the sky where clouds form and bring rain. In short, the Sun drives almost every aspect of our world’s climate system and makes possible life as we know it.

Earth’s orbit around and orientation toward the Sun change over spans of many thousands of years. In turn, these changing “orbital mechanics” force climate to change because they change where and how much sunlight reaches Earth. Thus, changing Earth’s exposure to sunlight forces climate to change. According to scientists’ models of Earth’s orbit and orientation toward the Sun indicate that our world should be just beginning to enter a new period of cooling — perhaps the next ice age.

However, a new force for change has arisen: humans. After the industrial revolution, humans introduced increasing amounts of greenhouse gases into the atmosphere, and changed the surface of the landscape to an extent great enough to influence climate on local and global scales. By driving up carbon dioxide levels in the atmosphere (by about 30 percent), humans have increased its capacity to trap warmth near the surface.

Other important forcings of Earth’s climate system include such “variables” as clouds, airborne particulate matter, and surface brightness. Each of these varying features of Earth’s environment has the capacity to exceed the warming influence of greenhouse gases and cause our world to cool. For example, increased cloudiness would give more shade to the surface while reflecting more sunlight back to space. Increased airborne particles (or “aerosols”) would scatter and reflect more sunlight back to space, thereby cooling the surface. Major volcanic eruptions (such as that of Mt. Pinatubo in 1992) can inject so much aerosol into the atmosphere that, as it spreads around the globe, it reduces sunlight and cause Earth to cool. Likewise, increasing the surface area of highly reflective surface types, such as ice sheets, reflects greater amounts of sunlight back to space and causes Earth to cool.

Scientists are using NASA satellites to monitor all of the aforementioned forcings of Earth’s climate system to better understand how they are changing over time, and how any changes in them affect climate. 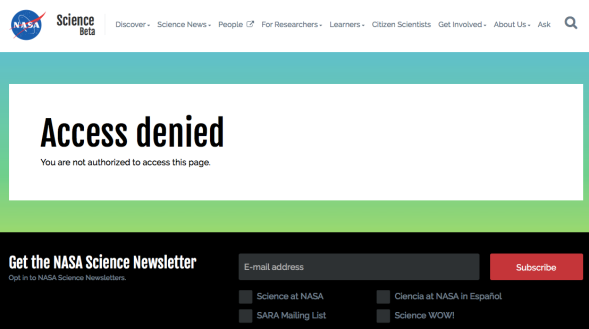 (Climate rationalists – you and I  – are still waiting for that “big oil” cheque to arrive in the mail!)

7 Comments on “THE Orwellian Era Of @NASA Climate Pseudoscience”