Britain’s gone nine days with almost no wind generation, and forecasts show the calm conditions persisting for another two weeks.

The wind drought has pushed up day-ahead power prices to the highest level for the time of year for at least a decade. Apart from a surge expected around June 14, wind levels are forecast to stay low for the next fortnight, according to The Weather Company.

“People would’ve started worrying about brownouts,” Elchin Mammadov, analyst at Bloomberg Intelligence said. “This shows that relying on wind, solar and batteries to supply the majority of our power is reckless for energy security.”

On Wednesday, wind generated about 4.3 percent of the U.K.’s electricity. Coal output has dropped near zero. Gas and nuclear have picked up the slack with 54 percent and 25 percent respectively, according to data from National Grid Plc.

The weather can be fickle and the government has to make sure that there is enough back up generation for times when the wind isn’t blowing. Greg Clark, secretary of state for business energy and industrial strategy announced Monday that the U.K. will take the next step toward agreeing to help Hitachi Ltd. finance a new nuclear reactor.

THE wind blowing everywhere but the UK! LOL… 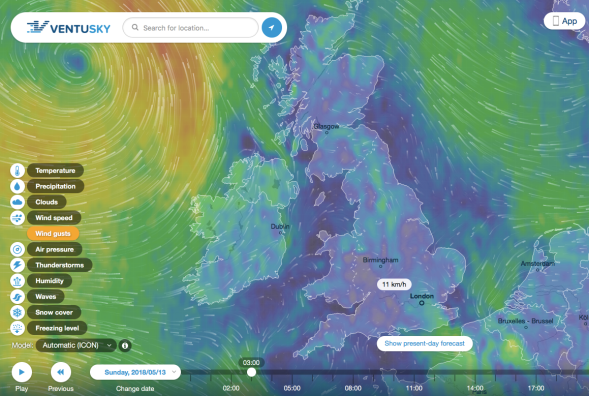 ANY national grid system reliant on unreliables – wind and solar – and the whims of the weather, is doomed for failure – energy poverty, blackouts and brownouts!