IF CO2’s Your Poison, Renewable Energy Is No Antidote 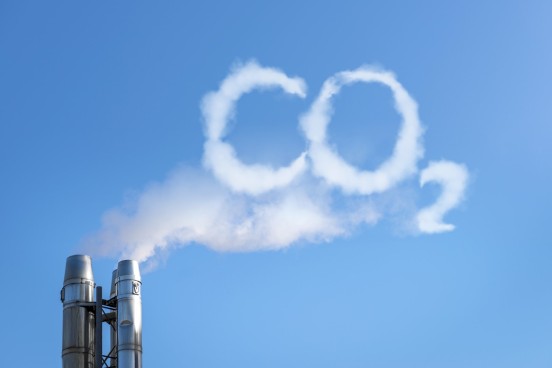 ATMOSPHERIC Physicist, MIT Professor of Meteorology and former IPCC lead author Richard S. Lindzen, examines the politics and ideology behind the demonisation of essential trace gas and plant fertiliser, carbon dioxide. A by-product of hydrocarbon energy production that “has a kind of fundamental attractiveness to bureaucratic mentality” and remains the grand patsy and key driver of the climate crisis industry…

THE proliferation of unreliables over the past decade has not, and will not, result in statistically significant reductions in global carbon dioxide emissions. That point can easily be proven by analysis of the country that has poured more money into ‘green’ energy than any other – Germany…

As we have been hearing recently, global CO2 emissions continue their steady climb, despite the trillions of dollars committed to green energy sources worldwide and efforts to curb CO2 emissions.

Looking at countries individually, Germany, a self-designated “leader” for carbon free energies, saw its equivalent CO2 greenhouse gas emissions in 2017 fall only a measly half a percent.

Big green talk, so little to show
If any country has seen huge chasm between its CO2 reductions performance and its lofty green rhetoric, Germany is it.

Despite the hundreds of billions already spent on green energies, mainly, wind, sun and biogas, Paris Accord cheerleader Germany has not seen any progress in CO2 reductions ten years running: 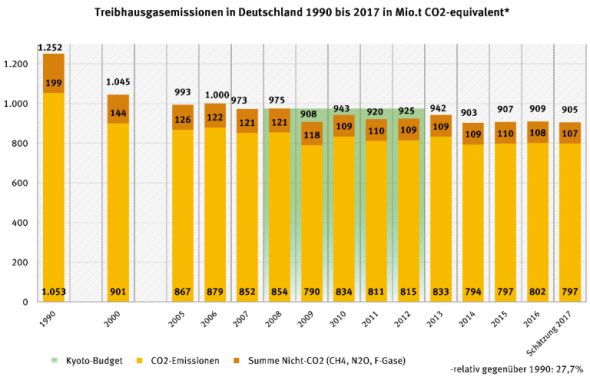 Dubious 1990 benchmark
Most of the country’s CO2 reductions since 1990 arose from the shutdown of old communist run East German industry, after the eastern and western parts of the divided nation united in 1990.

Offshored emissions, pollution
Also huge CO2 reductions resulted from the offshoring of energy-intensive industries, to countries where regulations are less strict, labor is cheaper and energy efficiency is woefully lower; for example: China. The true result: Germany managed to cut its CO2 equivalent emissions, but the net result is most likely greater overall CO2 emissions.

The same could be said about plastic in our oceans. Often it’s best to keep the industry home, where at least it’s done far more cleanly.

Huge price for so little result
Moreover, Germany’s investment in green energies really did not begin in earnest until 2005, and so the results have been truly a flop. All that money for so little.

ANOTHER must read analysis via NTZ showing that the more wind and solar added to the grid, the more fossil-fuel backup energy is needed to cover for the times when the wind don’t blow and the sun don’t shine!

As the reputed world leader in green energy policy, Germany plans to eliminate nuclear power as an energy source in the next 5 years.

A 2011 decision to phase out nuclear power by 2022  has meant that renewables like wind and solar power are expected to swiftly take the place of nuclear energy on the German power grid.  The portion of Germany’s power generation from wind and solar (renewables) has indeed risen dramatically in the last 10 years: 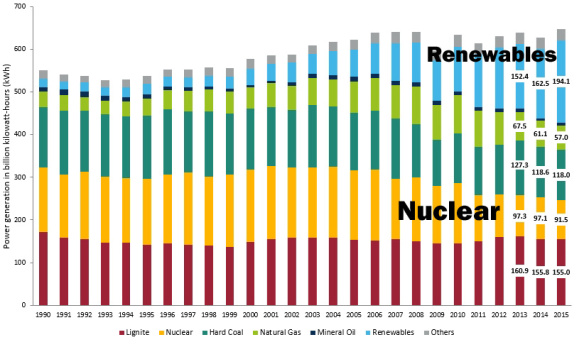 Germany’s “green” leadership and vociferous allegiance to renewables as a dominant power generation source has elicited controversy.  Wind and solar are very labor and material-intensive (expensive) energy sources, and the dramatic rise in solar and wind power capacity has come with great financial expense to German citizens.  Poorer households have long been the most adversely affected.  Dating back to 2000, electricity prices have risen by 80% in Germany, leaving 7 million citizens “energy poor” (meaning that more than 10% of their income has to be spent on heating and electrifying their homes).

Analysis by the European Commission indicates that “nearly 11% of the EU’s population [encompassing 54 million people] are in a situation where they live in  households in which they find themselves unable to heat their homes at an affordable cost,” which may effectively put their lives at risk.   This latter point is not an exaggeration.  In the UK, where heating costs rose 63% between 2009 and 2014, 25% of citizens over 60 are classified as “energy poor”, leaving the elderly population especially vulnerable.  During the frigid winter of 2014, the number of “excess winter deaths” reached 49,260, of which about 14,780  were due to people living in cold homes that they couldn’t afford to heat.

What’s happening in Germany is, unfortunately, a bellwether for what is to come in other large wealthy countries attempting to make renewables the kingpin of their power grids.  The unspoken truth about renewables was succinctly summarized in a 2012 Los Angeles Times analysis :

“As more solar and wind generators come online, … the demand will rise for more backup power from fossil fuel plants.”

The full article, entitled “Rise in renewable energy will require more use of fossil fuels”  also points out that wind turbines often produce a tiny fraction (1 percent?) of their claimed potential, meaning the gap must be filled by fossil fuels:

The Growth Of Fossil Fuel Energies 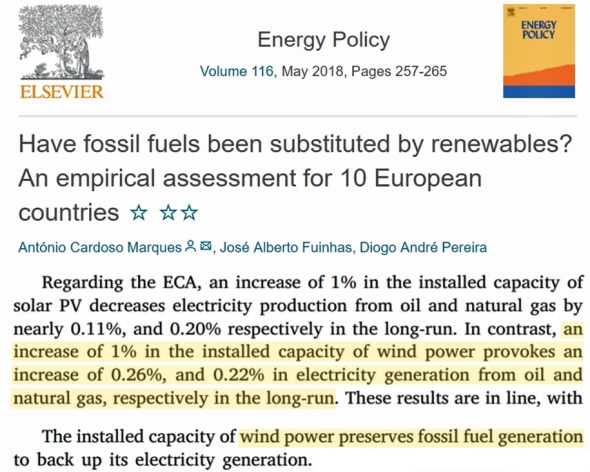 In late 2012, a prophetic article appeared in the Los Angeles Times that warned:

Wind turbines cannot produce energy when the wind is not blowing.   Consequently, wind power routinely needs to be backed up by reliable and immediately-available energy sources — which are often fossil fuels-based (gas, oil, coal).

So as wind power installation expands across the world, more fossil fuel plants will need to be built to back them up.

2 Comments on “IF CO2’s Your Poison, Renewable Energy Is No Antidote”