← TWISTERS Missing From Tornado Alley
CLIMATE ACTIVIST : If Solar And Wind Are So Cheap, Why Are They Making Electricity So Expensive? →

Five U.S. Olympians will be on Capitol Hill Wednesday to brief lawmakers on how climate change is impacting winter sports and recreation.

“We still have a chance to be able to kind of salvage whatever is left of our winters, and kind of get back to a more sustainable way of life,” said Arielle Gold, who won a bronze in the halfpipe snowboard event in the PyeongChang 2018 Winter Olympics — and will be on Capitol Hill on Wednesday.

A recent study by a team of researchers, led by the University of Waterloo, found that climate change poses a threat to the Winter Olympics — and that by the end of the century, only eight of 21 sites that have hosted the Winter Olympics in the past will have temperatures low enough to host again unless greenhouse gases emissions significantly drop.

“The climate in many traditional winter sports regions isn’t what it used to be, and fewer and fewer places will be able to host the Olympic Winter Games as global warming accelerates,” Daniel Scott, a professor at Waterloo, said in a January news release on the study.

The Paralympics is also particularly vulnerable, according to researchers.

“The traditional scheduling of the Paralympic Winter Games, approximately a month after the Olympic Winter Games, poses additional climate challenges as temperatures are warmer and the probability of rain instead of snowfall increases in most of the host locations,” Scott said.

The briefing Wednesday follows the introduction of House Resolution 825, which supports policies addressing the causes and effects of climate change and recognizes its impact on outdoor recreation.

NO doubt these graphs were presented to Congress, as evidence, by the CO2-complainants… 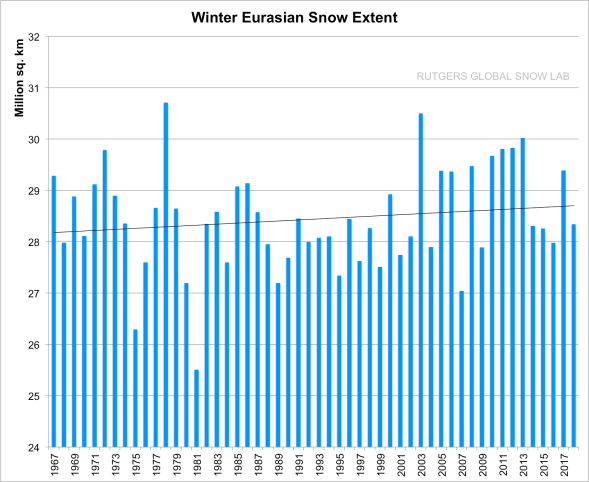 NB// 2018 data is incomplete. They might need a new Y-axis after the record-breaking NH snow season!

ACCORDING to the most comprehensive and accurate data, winter snowpack is on the rise as those pesky CO2 “emissions” increase.

OUTSIDE of those overheated climate ‘models’, there appears to be no immediate threat to the “winter” Olympics. In fact conditions are becoming even more favourable as apparent man-made climate change persists.

2017/18 has seen snowfall records tumble across the globe: 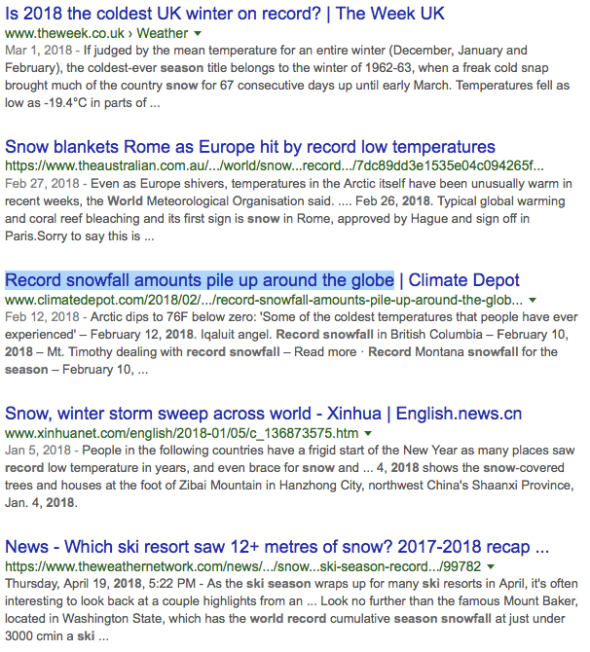 NO doubt the athletes who testified enjoyed the “sustainable” warmth of the climate controlled halls of Congress after conditions were so cold in Pyeongchang that athletes skis were “warped” forcing some to toss them out after training runs!

Wind, ice and cold are making this Olympics too wintry | YAHOO

IT should be pointed out that a secondary ‘study’ for which this latest climate sideshow is based relates to the “scheduling of the Paralympic Winter Games” :

SPRING NH snowpack shows a decline from the century cold maximum of the 1970’s, though no significant trend from 1990-2017 : 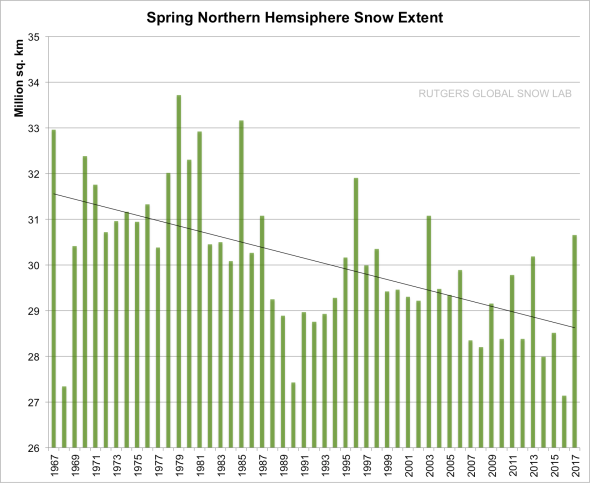 KEEP in mind that all snowpack graphs start in the late 1970’s during the coldest decade of the 20th century at the height of the (warranted) “global cooling” scare. So, we should expect to see a decline in snowpack as the planet warmed out of this period. This trend is only seen in Spring snowpack data though no significant trend through 1990 to present. The opposite was recorded in both winter and fall data despite rising CO2 emissions!

PERHAPS the Paralympics could be moved to the Fall? Just sayin.

UNLIKE the record cold, snowy 2018 Winter Olympics, the 1932 Lake Placid Olympics actually was threatened by warm, rainy weather – which washed all the snow away.

DO you think this article was presented to Congress, as evidence, by the CO2-complainants?

Whatever climate experts, progressives and Democrats say, it is normally safe to assume the exact opposite is true. – Tony Heller