ANTARCTICA : It’s Time We Had That Talk

The Ross Ice Shelf is Freezing, Not Melting. Which Is Weird | Popular Mechanics

IT’S time for ‘that talk’. You know, the one we’ve been putting off because it’s ‘inconvenient’. That end-of-life conversation…

YEP! Antarctica, the ‘inconvenient’ pole, the naughty child, has been gaining ice mass and cooling for decades, despite a 20 per cent increase in atmospheric CO2, and model predictions to the contrary. 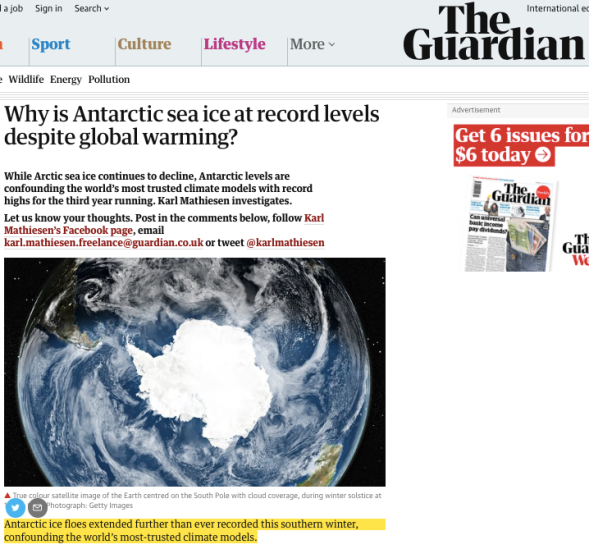 CLIMATE MODELS AND THE IPCC SAY ANTARTICA SHOULD BE SHRINKING

ACCORDING to the most recent report by the Intergovernmental Panel on Climate Change (IPCC), CO2-induced global warming will result in a considerable reduction in sea ice extent in the Southern Hemisphere. Specifically, the report predicts a multi-model average decrease of between 16 and 67 percent in the summer and 8 to 30 percent in the winter by the end of the century (IPCC, AR5 2013).

THANKS to the Journal of Climate by Josefino Comiso et al, we now know what’s driving the increase in Antarctic sea-ice. It’s – wait for it – cooling temperatures over the ocean surrounding Antarctica…

Positive Trend in the Antarctic Sea Ice Cover and Associated Changes in Surface Temperature: Journal of Climate: Vol 30, No 6

The Antarctic sea ice extent has been slowly increasing contrary to expected trends due to global warming and results from coupled climate models. After a record high extent in 2012 the extent was even higher in 2014 when the magnitude exceeded 20 × 106 km2 for the first time during the satellite era. The positive trend is confirmed with newly reprocessed sea ice data that addressed inconsistency issues in the time series. The variability in sea ice extent and ice area was studied alongside surface ice temperature for the 34-yr period starting in 1981, and the results of the analysis show a strong correlation of −0.94 during the growth season and −0.86 during the melt season.

WHILE large swathes of academia, mainstream media, indoctrinated children, the corporate world and the political class have been conned into a zealot-like belief of man-made climate change, based largely on groupthink, bogus 97% consensus surveys, virtue-signalling and mainstream media eco-hype on repeat, it is important to note that there is still NO empirical evidence proving that mankind’s minuscule addition to trace gas carbon dioxide in the atmosphere has caused any significant climate change or slight recent warming outside of normal bounds. No human fingerprint has been isolated after four decades of research and trillions of dollars of public money spent on global warming hysteria.

THERE is however, significant evidence refuting a human fingerprint on climate change and one of the best examples can be seen from the Antarctic…

If global warming is driven by the influence of carbon dioxide and other man made greenhouse gases, it will have certain characteristics, as explained by Karl Braganza in his article for The Conversation (14 June 2011).

As water vapour is a very strong greenhouse gas, it will tend to mask the influence of man made greenhouse gases, and because solar radiation is such a powerful driver of temperature, this also must be taken into account.  Therefore, the characteristic greenhouse warming fingerprints are best seen where solar and water vapour influences can be minimised: that is, at night time, in winter, and near the poles.  So we would look for minimum temperatures rising faster than maxima; winter temperatures rising faster than summer, and polar temperatures rising faster than the tropics.  Indeed, polar temperature change in winter should be an ideal metric, as in Arctic and Antarctic regions the sun is almost completely absent in winter, and the intense cold means the atmosphere contains very little water vapour.  We can kill three birds with one stone, as winter months in polar regions are almost continuously night.

So let’s look at the evidence for greater winter and polar warming. 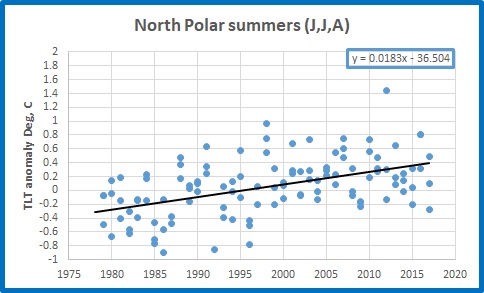 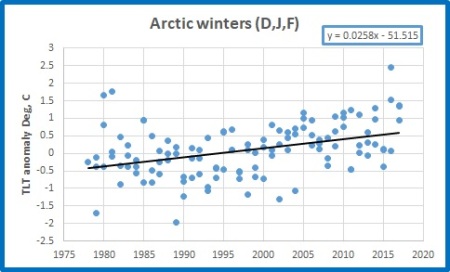 Unfortunately for the theory, the opposite happens in the South Polar region: 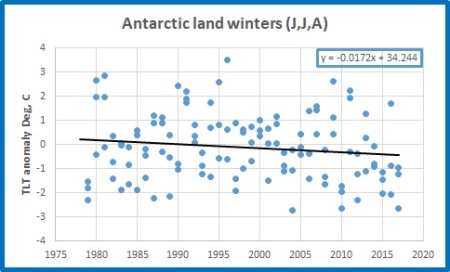 This is the exact opposite of what is supposed to happen in very dry, cold, and dark conditions- at night, in winter, at the poles.  Can this be because carbon dioxide and other greenhouse gases are NOT well mixed, and are in fact decreasing in concentration near the South Pole?

Figure 8:  South Polar region TLT (all months) as a function of CO2 concentration:

Is it because the oceans around Antarctica are cooling?

The cold, dry, dark skies over Antarctica are getting colder in winter.  Summers show a small warming trend.

Conclusion:  The fingerprints of man made greenhouse warming are completely absent from the South Pole, and differences between North and South Polar regions must, until shown otherwise, be due to natural factors.

“Any use of the Content must acknowledge the source of the Information as CSIRO Oceans & Atmosphere and the Australian Bureau of Meteorology (Cape Grim Baseline Air Pollution Station) and include a statement that CSIRO and the Australian Bureau of Meteorology give no warranty regarding the accuracy, completeness, currency or suitability for any particular purpose and accept no liability in respect of data.”

More on Antarctic temperatures via NTZ

‘Polar Amplification’ From Increased CO2 Not Detectable For Antarctica

Consistent with the conceptualization that “polar amplification” from increasing human CO2 emissions has gone unrealized, the temperature records for the Antarctic continent do not suggest warming has occurred in recent decades.

BIG increase in snowfall in Antarctica with “The effect of the extra snow locked up in Antarctica is to slightly slow a general trend in global sea-level rise.” Again, defying IPCC climate model predictions on snowfall.

THE Antarctic anomaly should give pause for thought about climate alarmism in general and implore us all to evaluate the worthiness and sense of spending literally trillions of dollars of public money on draconian and overarching climate policy coupled with highly subsidised green schemes and scams in order to arrogantly attempt to stop, slow or for some, even halt a natural phenomenon that’s been happening since the beginning of time – climate change!

9 Comments on “ANTARCTICA : It’s Time We Had That Talk”