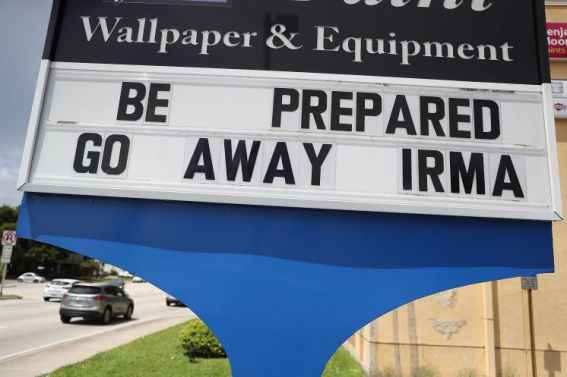 THE last major hurricane before Harvey and Irma to make landfall on the Continental United States was Wilma in 2005, striking one year before Twitter was invented (2006) and two years before the first iPhone was sold (2007).

SINCE 2005, the U.S experienced a record 12 year drought of major landfall U.S hurricanes. The 4,324 day record was finally broken by Harvey which made landfall in Texas as a CAT 4 hurricane on August 25.

AS a guide, the average peak season for the Atlantic hurricane season as stipulated by NOAA (2001) : 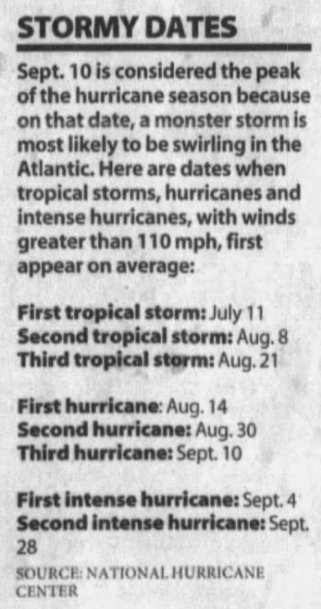 AS happens every time a large natural weather catastrophe strikes, the media is filled with assertions that the calamity’s magnitude is attributable to climate change :

THE best available, peer-reviewed Hurricane and Cyclone data refutes any correlation between increased CO2/temperature and an increase in extreme weather events. However, the climate crisis industry never lets a good storm go to waste. After all, far too many reputations, jobs, money and superstitions are now at stake.

TWITTER provides a wealth of life-saving information and real-time updates for those directly affected by extreme weather events. It also acts as a platform for interesting and often humorous, data-based retorts to combat the litany of alarmist rhetoric spewed by climate ambulance chasers and global warming alarmist trolls…

HERE’S a sample taken from the lives of Irma and Harvey :

In reply to Newsweeks howler!

No trend in Global TC Landfalls. U.S Hurricanes “bottoming out” :

Sure, but what about those that hit land and cause damage?
Similarly, no trends globally or US (recent years actually depressed) pic.twitter.com/M2YgKQ4P2Q

Why does the IPCC conclude what it does?
Data.
(below is official gov't data via @RyanMaue) pic.twitter.com/T71Lsy1mVH

Via @philklotzbach you can see how the bottom has dropped out of US hurricanes over the past decade. Lucky us! (Won't last tho) pic.twitter.com/uxfiAk6cC7

IF #Harvey and #Irma prove #ClimateChange, does the RECORD 12year drought of CAT3-5 landfall hurricanes before Harvey, disprove it? #weather https://t.co/FL4pz6Pi9p

ONE significant record which seems to get lost by the #hurricane hungry mainstream media… https://t.co/ECmzq0fDLb #Climate #Weather #Irma

Table of all U.S. landfalling hurricanes on record with pressure <933 mb – #Irma's current pressure. All these storms were devastating. pic.twitter.com/zBwp8UhDpG

Harvey & #Irma made US landfall as major hurricanes ~15 days apart. Record between US major hurricane landfalls is 23 hours set in 1933. pic.twitter.com/OzM2mfbLMd

Three of the ten deadliest Atlantic hurricanes occurred during the Revolutionary War. Democrats don't believe in history or science. https://t.co/RD1nOWWVVt

Hurricane season temperatures have plummeted over the past 110 years along the US Atlantic and Gulf coasts.https://t.co/tLZbUAO02K pic.twitter.com/Rba6PwxPsc

Galveston, Texas was destroyed by a hurricane on this date in 1900. CO2 was below 300 PPM. ten thousand people died.https://t.co/qKHT9TgzU8 pic.twitter.com/JoSmPBAXzo

If you are fortunate enough to have electricity in Florida today, it's NOT coming from solar and wind.

The answer is no. Hurricanes are not a result of climate change. Next question, Sahil. https://t.co/sPXu58LJjC

Long-range forecasting has long ways to go. Irma forecast from 30 August: From New Orleans to Iceland! Few had Fla pic.twitter.com/okIahxIz0p

If warmists 'knew long ago that Harvey was on its way, let them prove it by predicting' next years season https://t.co/b5g5MpaQAZ

Hey Jen, how about skipping Earth Day this year and check yourself in to a mental clinic  https://t.co/bEqNjzdgnH via @MailOnline

Please, at least check Wikipedia before omitting to some point of view, otherwise you are stuck with falsehood. pic.twitter.com/RW10mWroeB

That source is directly contradicted by the best hurricane analyst in the US, Dr. Ryan Maue, and the IPCC itself. pic.twitter.com/jjIr8Eh6Rg

The North Atlantic cyclone activity shows NO TREND since 1950. Note the decline of Cyclone Energy Index since 2005:https://t.co/JYFo0a3wMf pic.twitter.com/mga8dvoYYV

Galveston, Texas was destroyed by a hurricane on this date in 1900. CO2 was below 300 PPM. ten thousand people died.https://t.co/qKHT9TgzU8 pic.twitter.com/JoSmPBAXzo

Currently we don't know enough to say things are worse than they would otherwise have been. pic.twitter.com/nUcWPDRhvy

Harvey and Irma are terrible, but we need perspective:
Major landfalling US hurricanes trending downwards over past 140 years pic.twitter.com/AEqaRQAx4t

if this is so global, why the greatest producer of tropical cyclones, the Pacific is dead quiet, but co2 fairy has taken over
in Atlantic pic.twitter.com/reS4NxMsYY

what a despicable bunch. What is co2 causing what is a complete shutdown where tropical activity is the greatest. the Pacific pic.twitter.com/46I2qMcED7

Bill Nye confuses the oceans with the atmosphere. #FakeScience

IRMA DEEP-BREATHS 🌪 “And we can see that #Irma is not in the same league as the others.” https://t.co/yzyFlorFw9 #HurricaneIrma #Climate

In 1926, Florida was hit by three hurricanes, including one which destroyed Miami. pic.twitter.com/eYvs5bqdsg

WHEN anti-humanitarian Grover Cleveland was @POTUS in the 1880's, the US was hit by 26 #hurricanes, compared with 4 under Obama. #Irma2017 pic.twitter.com/dwozPxqG9E

Which of these Hurricanes were man made? None. https://t.co/UsSf9w6cIo pic.twitter.com/uhqfT2RZBe

Bastardi: No Michael Mann — Climate change did not cause Hurricane Harvey https://t.co/9wxYBGo0rp via @ClimateDepot

Miami was destroyed by a hurricane in 1926, but occasional street flooding now is due to "climate change" pic.twitter.com/KBq5i48y1e

https://t.co/jsVABhuuBR How do you explain so many storms stronger than Harvey, most from over 50 years ago. Ever see this in 1886? explain pic.twitter.com/KSQ5P7PnPQ

Number of major landfall hurricanes in the US have been declining, not increasing, over past 140 yearshttps://t.co/YbprqsuD0e pic.twitter.com/1GZ7cp9jfF