“Further, these policies will destroy economic wealth, meaning fewer resources would be available to strengthen infrastructure to contain the future effects of natural disasters and to afterward.

Instead of blaming man-made greenhouse gas emissions, climate catastrophists should see natural disasters for what they really are: natural.”

Flooding in homes and businesses across Houston was still on the rise when Politico ran a provocative article, titled “Harvey Is What Climate Change Looks Like.” 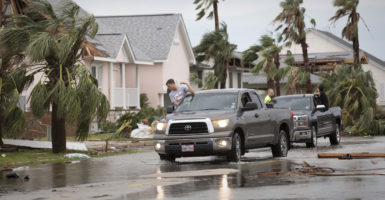 Politico was not alone, as another news outlet called the one-two punch of Harvey and Irma the potential “new normal.” Brad Johnson, executive director of the advocacy group Climate Hawks Vote, says Harvey and Irma are reason to finally jail officials who “reject science.”

Rather than focus on the victims and offer solutions for speedy recovery, pundits and politicians in the wake of Harvey focused on saying, “I told you so.”