← Renewables Disaster Sees Australian Power Prices Jump Another 20% – With Worse to Come
Snow in the Rockies, Cascades, and Sierra Nevada – in June! →

“Bottom line: I can only conclude that climate change researcher David Barber was grandstanding today when he told the media that global warming is to blame for Newfoundland’s record thick sea ice conditions this year. I suspect that because Barber’s expensive research expedition was scuttled, he simply had to find a way to garner media attention for his project — and the media obliged. Read to the end and decide for yourself…”

Heavy sea ice off Newfoundland and southern Labrador has been an issue for months: it brought record-breaking numbers of polar bear visitors onshore in early March and April and since then has hampered the efforts of fisherman to get out to sea. 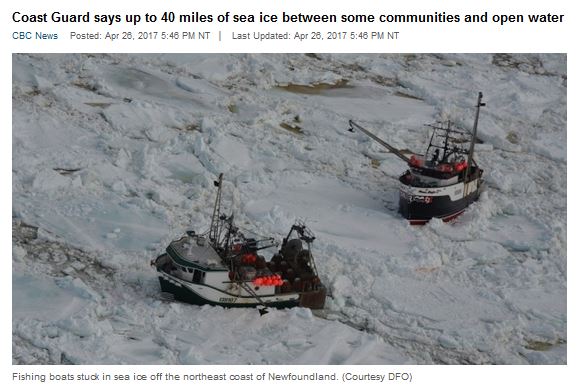 Let’s look back in time at how the ice built up, from early January to today, using ice maps and charts I’ve downloaded from the Canadian Ice Service and news reports published over the last few months.

The tour is illuminating because it shows the development of the thick ice over time and shows how strong winds from a May storm combined with an extensive iceberg field contributed to the current situation.

Bottom line: I can only conclude that climate change researcher David Barber was grandstanding today when he told the media that global warming is to blame for Newfoundland’s record thick sea ice conditions this year. …