← David Horowitz: Why I am No Longer a Leftist
Green-Energy Insanity Unhinged →

“The reality is that the Department of Energy has gotten way out ahead of itself in recent years, inserting itself into policy areas and markets where it is not appropriate.”

By Katie Tubb and Nicolas Loris ~

President Donald Trump released his budget blueprint today, and his proposal for the Department of Energy is a breath of fresh air.

Opponents have pilloried the draft as anti-science, anti-clean energy, and even extreme—all of which lack merit. The reality is that the Department of Energy has gotten way out ahead of itself in recent years, inserting itself into policy areas and markets where it is not appropriate. This only distracts from the department’s core, appropriate mission. 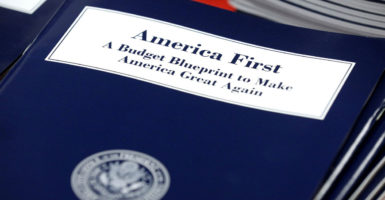 The president’s discretionary budget proposal would, among other things, cut energy loan programs and scale back funding for applied energy research programs for all sources of energy. (Photo: Joshua Roberts/Reuters /Newscom)

The draft budget cuts many pet projects of both Democrats and Republicans. In particular…