Quick fix – turn them off at night, if (intermittent) Mother Nature hasn’t beaten you to it.

No doubt, PETA, RSPCA, WWF are onto this anyway, or is that crickets I hear chirping? 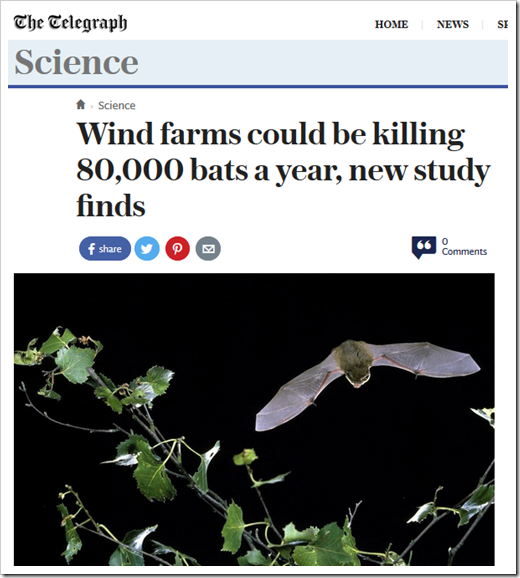 Wind farms are probably killing tens of thousands of bats a year, even where risk assessments have been carried out to prevent the deaths, a study has found.

As for the toxic “mining” of rare earth metals to make these mega-batteries. And if so, cue the outrage from the “greens” who detest ‘mining’ – yeah right. Hypocrites.

Mythical storage system on the road to nowhere…

One of the more hilarious moments that followed the aftermath of South Australia’s statewide blackout on 28 September (aka ‘Black Wednesday’), was when The Australian quoted the CEO of French wind power outfit Neoen – one of the wind power operators whose turbines were responsible for SA’s date with the Dark Ages:

Neoen Australia managing director Franck Woitiez, whose turbines at Hornsdale wind farm shut down as part of the system trigger, said the statewide blackout was caused by the storm. With his wind farm now back in full operation, he cautioned against a kneejerk response to the black out. “Battery storage has a huge part to play in our system going forward and we need to keep viewing renewables as part of our energy mix,” Mr Woitiez said.

For the record, battery storage plays no part in South Australia’s power…

“But before Michelle Obama gets shaken any longer, I would suggest she read the lyrics of the best known rap songs with her daughters and compare what she reads to the ignorant indignities of Donald Trump. Which shakes her core more? Or is that core suffering from a severe case of political correctness?”

Different set of rules for the ruling class and the elite Left.

For those who follow popular culture, the slide into debasement is palpable. From the f-bomb to pornographic exposure, America has become the land of anything goes. The once provincial, laced up nation, challenged by the liberal view of expression, has lost. Victorian notions of modesty are as outmoded as horse-drawn plows.

A couple of months ago an eleven-year-old tape of Donald Trump was aired in which he employed vulgar and uncouth language about women. It was inexcusable, notwithstanding the debasement in the culture. As one might guess, this matter became the focus of the Clinton campaign for president. First lady Michelle Obama said she was “shaken…to my core” by Trump’s comments and, alas she has a point.

However, if Trump’s lewd remarks are so meaningful, it is worth asking why she and the president have openly promoted rap “artists” who glorify misogyny, sexual objectification of women…

Climate Debate Is On

The silent majority of climate realists (sceptics) finally have a vocal and qualified voice in the Australian parliament.
Listen for the sound of teeth gnashing in the ideological halls of climate-groupthink, government departments like the CSIRO and BoM! The scientific debate between Roberts et al. and CSIRO is documented in depth for all to peruse at Climate Change – One Nation’s response to CSIRO  (here).

Senator Malcolm Roberts in his maiden speech asserted that CSIRO had no empirical evidence that human emissions of CO2 caused any significant global warming.  A meeting was arranged between CSIRO and Senator Roberts’ staff where CSIRO presented their empirical evidence.  The linked document is a detailed review of that empirical evidence and has raised many questions, as well as indicating some points of agreement.

Excerpts below with images suggest that…