Europe Pulls The Plug On Its Green Future

The uselessness of ‘unreliable’ wind and solar energy, hastily rolled out to “save the planet”, is being slowly and painfully discovered at enormous cost to western economies and to the environment.

Sceptics have been warning of this for years. However, deep-green “save the planet” sanctimony has largely triumphed in the echelons of the political, media and social elite. 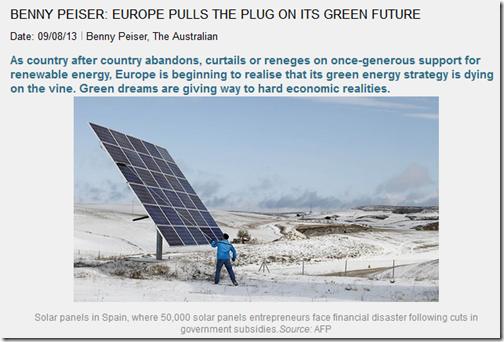 Benny Peiser had a long piece in the Australian a couple of years ago, which revealed the huge mess in the EU’s green energy strategy:

Slowly but gradually, Europe is awakening to a green energy crisis, an economic and political debacle that is entirely self-inflicted.

The mainstream media, which used to encourage the renewables push enthusiastically, is beginning to sober up too. With more and more cracks beginning to appear, many newspapers are returning to their proper role as the fourth estate, exposing the pitfalls of Europe’s green-energy gamble and opening their pages for thorough analysis and debate. Today, European media is full of news and commentary about the problems of an ill-conceived strategy that is becoming increasingly shaky and divisive.