HuffPo Writer: We Should Unplug Our Energy-Burning Christmas Decorations

Enviro-evangelists and the leftist media, wishing us back into the cave.

In the annual competition between leftist media outlets for the screwiest (or most Scrooge-like) criticism of Christmas traditions, a Huffingon Post item published Thursday morning by Michael McLaughlin (HT Breitbart) was a formidable entry.

After the HuffPo reporter’s headline noted that “U.S. Christmas Lights Burn More Energy Than Some Nations In A Year,” he suggested that “maybe we should unplug our decorations.”

Of course, that’s a ridiculous idea. Turning off Christmas lights here will do nothing to improve the situation in less developed countries (LDCs).

That said, McLaughlin inadvertently stumbled onto something when he found a researcher who criticized the developed world for attempting to dictate how LDCs should attempt to emerge from centuries of grinding poverty (link is in original; bolds are mine): 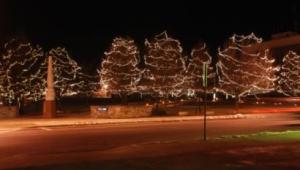 … In an interview with NPR, researcher Todd Moss said that it’s a useful comparison because many developing countries face pressure to…

There Is No Climate Change Disaster Except The One Governments Created

At the Paris Climate Conference of the Parties (COP21) we witnessed the biggest display of failed leadership in history from 195 countries. They established incorrect and misdirected policy based on failed and falsified science. It is a classic circular argument on a global scale. They invented the false problem of anthropogenic global warming/climate change and now they want to resolve the problem, but with a more disastrous solution.

Most countries were puppets that aspired to lead the deception but lacked the power so they contributed by serving as lackeys. Either way, all were purchased with promises of money. The majority receives money from successful countries, but all of them have an excuse for another tax. As George Bernard Shaw said,

“A government with the policy to rob Peter to pay Paul can be assured of the support of Paul.”

These leaders are all examples of…