← Realclimate.org goes dark – is it permanent?
Terrorism and a cold winter refugee crisis →

Half a trillion un-renewable €uros later, Germany realises that on some days, the wind don’t blow and on others, the sun don’t shine! 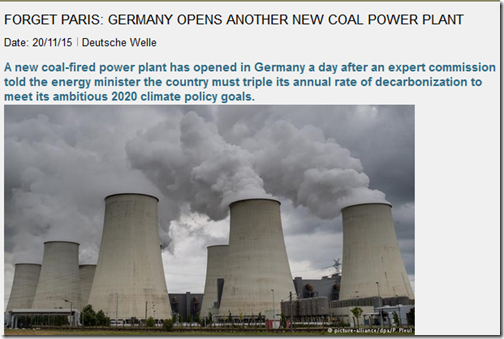 The button-pushing symbolized Vattenfall’s ceremonial opening of a 1,600 Megawatt (MW) coal-fired power plant that had been under construction for eight years – despite heated opposition from Germany’s greens, who want the country to exit from coal altogether.

One day earlier, in London, the UK government had announced a ten-year plan to close down all remaining coal-fired power stations in Britain. At the very same time as UK politicians were basking in the resulting applause, Scholz’s fellow Social Democrat, Vice Chancellor Sigmar Gabriel, the leader of the SPD and the country’s minister of economy and energy, sat in a Berlin conference room absorbing some…