Photoshopping in the “worseness”

The global warming movement is shameless, as evidenced by the fabrication of pictures to make you fear CO2 to help you engage their movement.

What else do they fabricate to make you a ‘believer’? Temperature data?

The use of photoshop is a classic way to demonise the odourless, colourless, trace gas-of-life, CO2 ….

Readers may recall that we caught NOAA NCDC red handed putting in a photoshopped flooded house a couple of years back for an official government report.

Then there’s the famous polar bear on the ice floe image ursus bogus.

And let’s not forget Al Gore’s hurricanes for his book cover:

So when Tom Nelson asked today “Who’s got time to investigate BlackSmokeGate?” I decided to take on the task. Here’s the photo in question: 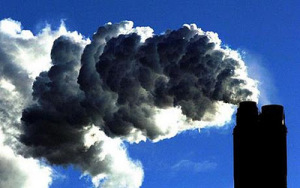 Tom was rightfully concerned that white steam rather than smoke comes out of these plants, as shown in this photo.

This station has been identified in the comment section of the article using it as Eggborough power station. Check out the white cloud coming from the power station in this Wikipedia photo.

I decided to run a simple but well…