Ross Ice Shelf Has Been Receding For Centuries

Climate experts at NASA say that the Ross Ice Shelf in Antarctica is receding due to emissions from your SUV.

In reality, this is a process that has been going on for centuries, and is unaffected by man’s activities. At NASA, the term “climate expert” is another term for “paid propagandist for the global warming scam” 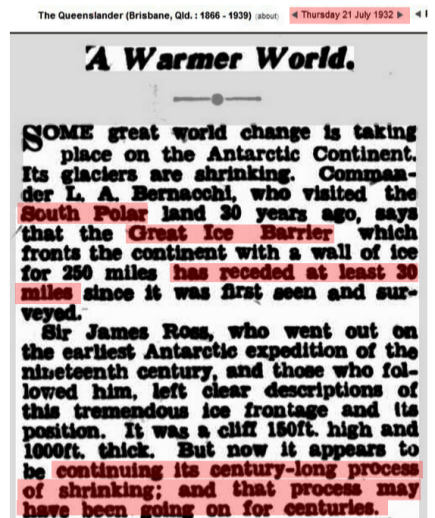 In 1923, the North Pole was melting with “unheard of high temperatures” and glaciers were disappearing.

According to the fraudsters at NASA, 1923 was one of the coldest periods on record, much colder than the 1970s – when Arctic ice and glaciers were expanding.

Unless the freezing point of water changed between 1923 and 1974, NASA is lying through their teeth. I’m going with the latter. They are crooks with an official government seal. That is why they keep changing their own data.