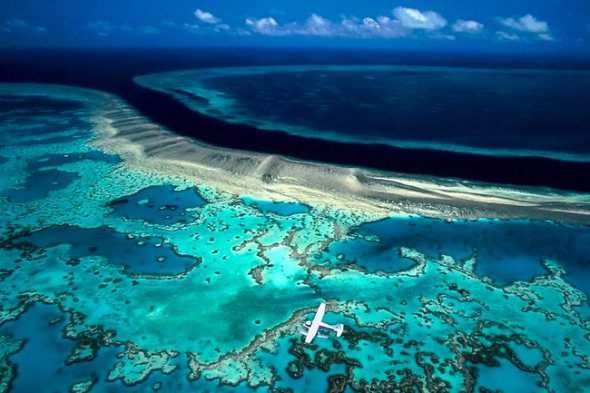 Greens marooned on the Reef

The Sunday Mail nails it:

With UNESCO giving the Reef a clean bill of health in a long-awaited report, the likes of Greenpeace, WWF, GetUp and the Australian Marine Conservation Society have been discredited and should not be permitted to peddle their lies in Queensland. In fact, the green movement’s role in this sorry debacle exposes them as frauds

The UNESCO report accepted that enough has been done by Australia to stop the destruction of the Reef. The trigger for the UNESCO probe was the Port of Gladstone expansion to cater for the boom in coal and coal seam gas exports, featuring the biggest dredging project in Australia’s history. Despite heavy conditions and environmental regulations, the greenies jumped on the issue which allowed them to link coal exports to climate change and the Reef.

For the Queensland tourism industry, the possibility of a UNESCO listing of the Great Barrier Reef as endangered would have had catastrophic implications for the state. It would have sent a message to tourists that the Reef had lost its lustre. But of course, the conservationists don’t have time for the trivialities of an industry worth billions every year to the economy…

The Greens are a major threat to the Queensland economy, fuelled by the Labor Left’s love affair with the movement and its capacity to stop progress…

The Great Barrier Reef tick of approval from UNESCO has exposed the state’s eco-warriors as the kings of deceit and lies. They should not be given a platform for their views because they have proven they are not capable of being honest and candid.

Greenpeace cons you about the Reef. How can you trust a word it says

The Greenpeace ad, claiming our Great Barrier Reef is being destroyed:

But wait. That picture of dead coral is actually of coral in the Philippines, and was lifted from another Greenpeace publication:

Even more amazing, Greenpeace had actually used that picture to demonstrate how coral killed by a cyclone could actually grow back. Don’t panic!

Apo Island’s community-managed marine sanctuary is considered one of the best of its kind in the world. Established in the mid1980s, the sanctuary became a beacon of hope that damaged reefs can, with proper protection, management, and community buy-in, be restored back to health. ..

Strong storm surges decimated the corals and washed them ashore. The sanctuary, once known to be teeming with marine life was left devastated and now resembles a coral graveyard. Fortunately the reefs on the other sides of the island were spared. But while the damage to the sanctuary was significant not all was lost because marine life around the island was already healthy…

Apo Island’s success story has always been a model of hope for the Philippine seas.

What a con. Here’s Greenpeace using a dodgy picture to push a dodgy scare about a dodgy warming theory – with the result that it’s likely to drive away tourists.

It’s also pretending nothing is being doing to “save” the Reef, when in fact more than $2 billion of taxpayers’ money is being spent over the next decade to protect it.

Has Greenpeace no shame?

Global warming alarmists have succeeded in spreading a lie about the Great Barrier Reef:


Col McKenzie, executive officer of the association of the marine park tourism operators, told The Australian that many visitors thought the reef was “dead”.

“Our brand has copped a hiding over the last few years and to a large extent unjustifiably. We have seen a big decrease in the amount of pre-booked and long-term bookings coming out of Europe and America. You talk to those people and they think the reef is dead and, if not, it is so close to being dead that it is simply not worth coming to see.That simply could not be further from the truth,” Mr McKenzie said.

“The green conservation movement … has caned the reputation of the tourism industry.”

No wonder a key to the Abbott Government’s lobbying to keep the Reef off UNESCO’s in-danger list has been to simply get journalists to see for themselves that it’s still there:

The federal government underlined the importance of keeping the reef off the UNESCO “in danger” list after it was revealed it spent $100,000 lobbying almost all of the World Heritage Committee to convince them the reef was not in danger. It also spent $88,000 on a junket for international journalists as part of a wider lobbying campaign.

Once again we must ask: if man-made global warming is so obvious, why all these lies and exaggerations?

GREENPEACE is again accused of false advertising and scaring people into donating to its campaign to save the Great Barrier Reef.

A Greenpeace billboard running on the London Tube includes the message: “If we don’t act now coal companies will be free to dredge in this beautiful natural wonder”.

It asks for donations and could give the impression that miners dredge the World Heritage-listed Reef.

A second emotive advertisement on YouTube features an upset child and mother and the line: “Half the Reef is already gone.’’

Half the Reef’s coral cover has been lost but the Great Barrier Reef Marine Park Authority says corals make up only 7 per cent of the marine park and World Heritage Area. All up, the reserved area covers 344,000 sq km.

Greenpeace has been running a series of brutally effective ads before UNESCO decides at the end of the month if the area will be listed in danger. 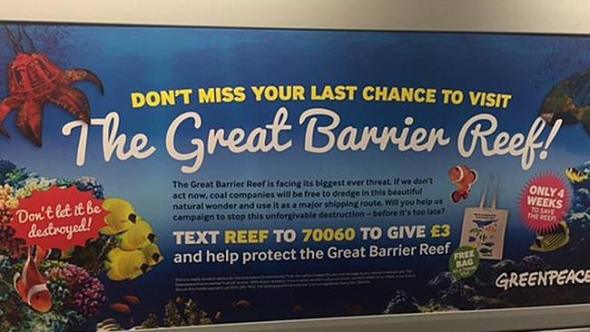 Greenpeace are advertising on the tube in London

Last month a draft decision found the Reef should not be listed but the World Heritage Committee warned Australia it must get fair dinkum about caring for the Reef and report back on its work in 2019.