The area of sea ice on Earth has increased 700,000 km² over the past decade. This is the exact opposite of both expert forecasts, and current claims made by experts – who lack in both competence and honesty.

Why NCDC Is Making Fraudulent Claims About “Hottest Year Ever”

2014 is nowhere near the hottest year ever, but NCDC is claiming it is because the White House agenda requires some fake data.

Most of the land surface is below normal temperature this year.

NCDC is releasing fake climate data for White House political purposes.  Obama knows that he can get a “deal” by simply selling out the United States. He also knows that the Republicans in Congress are too lazy and confused to stop him.

Brings back fond memories of that other climate alarmist story when “The UN “disappears” 50 million climate refugees, then botches the disappearing attempt” !

A new briefing paper from the Global Warming Policy Foundation examines the World Health Organisation’s recent report on climate change and finds that its estimates of future mortality from global warming are grossly exaggerated.

The WHO report predicted that climate change would bring about 250,000 extra deaths annually between 2030 and 2050, but relied upon absurd assumptions to reach this conclusion. For example, the report assumes that the people affected by climate change will forgo commonsense steps to protect themselves, including several that are already in the works in some developing countries. 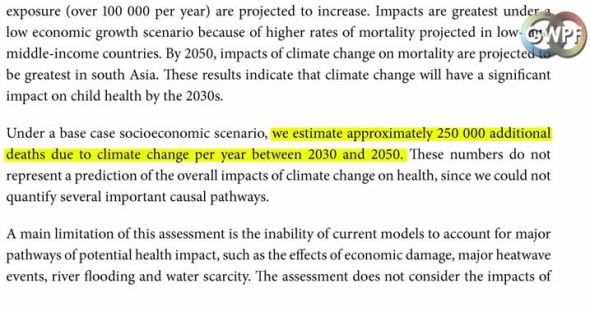 “The idea that people would not, for example, react to higher sea levels by building higher sea defences or even moving away from the coast is preposterous, so for the WHO to suggest such a high death toll from climate change completely misleads…

Are Polar Bear Researchers Blinded by Belief, or Acting Dishonestly?

Suggesting impending climate doom, headlines have been trumpeting polar bears are “barely surviving” and “bears are disappearing” prompted by a press release hyping the paper Polar bear population dynamics in the southern Beaufort Sea during a period of sea ice decline (hereafterBromaghin 2014), which based on an ongoing US Geological Survey (USGS) study. Dr. Susan Crockford rightfully criticized the media’s fear mongering and failure to mention increasing bear abundance since 2008 here. She also pointed out that modelers have consistently failed to account for the negative impacts of heavy springtime ice here.

I want to reinforce Crockford’s posts, plus argue the problem is much worse than she suggested. Bromaghin 2014’s purported 25 to 50% population decline is simply