Why Does The ABC Employ Dr Karl? 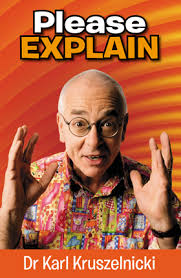 The ABC’s “science” guru, Dr Karl , has a severe problem in accepting the world isn’t warming as he insists. Here is just one of several examples I’ve written about before:

What Britain’s warmist Met Office actually said about warming since 1997:

The linear trend from August 1997 … to August 2012 …is about 0.03°C/decade, amounting to a temperature increase of 0.05°C over that period
What ABC science presenter Dr Karl repeatedly claims the Met said:

Reader JW Spry tries again to get ABC science presenter Dr Karl – a denier of the 16-year pause in warming – to correct a blatant error: 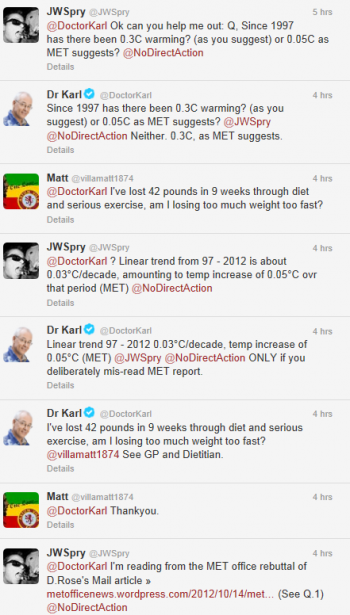 Yet even after being confronted with the evidence of error, Dr Karl refused to correct, acknowledge or apologise.

Totally unembarrassable, Dr Karl was at it again on the Drum yesterday, now claiming a mass beaching of walruses was evidence of global warming. Once again, he was completely wrong – and no one on the panel challenged him.

But when sceptics like me do what I’ve just done here – match warmist claims against facts, predictions against outcomes – and expose Karl-like alarmism, Dr Karl screams it’s a conspiracy. On The Drum yesterday:

I think it’s a disinformation campaign by the big carbon combustion companies.

Once again he was not contradicted.

Yet his conspiracy theory is nuts. In what way has a “carbon combustion company” influenced me when I compare Dr Karl’s crazier claims to the truth? Is Dr Karl claiming I’m using matieral supplied by such a company? That I’m corrupt, being paid by Big Carbon to lie?

Spell it out, Dr Karl. Oh, and please don’t forget to also address the actual errors I have identified in your claims.

On The Drum today I think even Steve Cannane was embarrassed by Dr Karl Kruszelnicki’s insistence that climate scepticism is an organised disinformation campaign by fossil fuel companies.

ExxonMobil is the world’s largest western owned oil company. Here’s what they say about climate change on their web site:

Climate policy…
Keeping in mind the central importance of energy to economies of the world, ExxonMobil believes that it is prudent to develop and implement strategies that address the risks to society associated with increasing GHG emissions.

You will find similar or more strident comments of other oil company websites. Hardly looks like the sort of campaign Dr Karl claims exists.

Why can’t he admit instead that people are able to compare statements and predictions made by alarmists to reality and draw their own conclusions?

A more important question: why does the ABC has a “science” presenter who is so shamelessly alarmist and unapologetically wrong?

The ABC is out of control.

One Comment on “Why Does The ABC Employ Dr Karl?”