← Arctic Sea Ice Extent At Its Highest Level In Over A Decade
Why Does The ABC Employ Dr Karl? →

“We live in constant fear of the adverse impacts of climate change. For a coral atoll nation, sea level rise and more severe weather events loom as a growing threat to our entire population. The threat is real and serious, and is of no difference to a slow and insidious form of terrorism against us.“
– Saufatu Sopoanga, fmr Prime Minister of Tuvalu, at the 58th Session of the United Nations General Assembly New York, 24th September 2003

I am not a scientist, however I can just read a graph.

Apparently graph readers and climate scientists are few and far between within the beautiful islands of the Pacific and Indian Oceans. So I guess it’s my citizenry duty to ease the fear and alarmism about “Sea Level Rise” for our friends @ClimateKirabati and other island nations living on the edge of sea-level-rise armageddon… 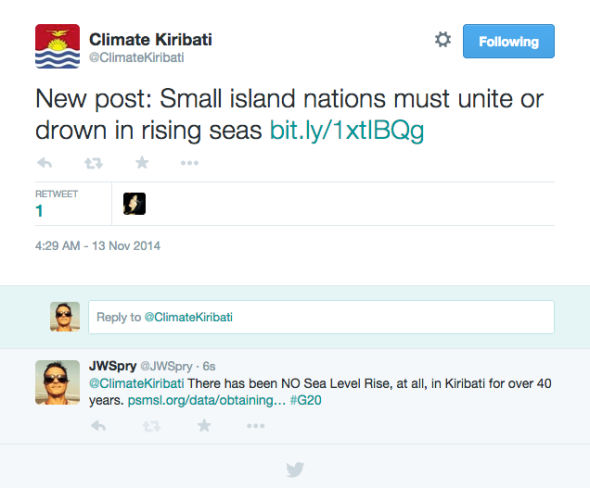 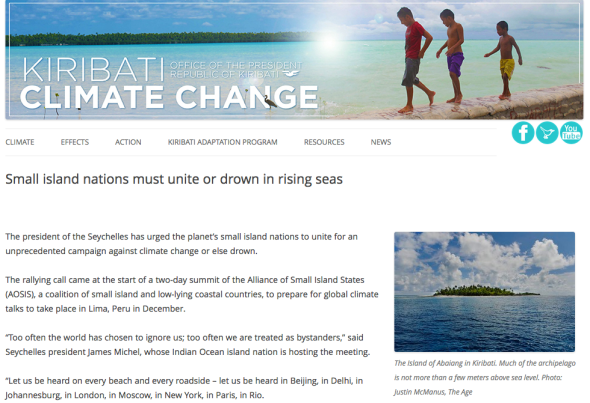 READING FROM A GRAPH :

Since 1994, there has been no overall sea level rise at PT.La Rue (Seychelles) :

There has been no Sea Level Rise, at all, in Kirabati for over 40 years :

The purported plight of Pacific and Indian Ocean Island nations like Kiribati, Tuvalu, Seychelles and the Maldives et al, serve merely as emotional arguments to promote Government climate agenda for carbon (dioxide) taxes and….control, whilst cash-strapped Pacific Island Nations use the associated climate guilt as a vehicle to pursue compensation to be paid by Western nations. Economic outcomes in line with the United Nation’s wealth redistribution agenda.