South China Morning Post : People would be idiotic not to question climate science 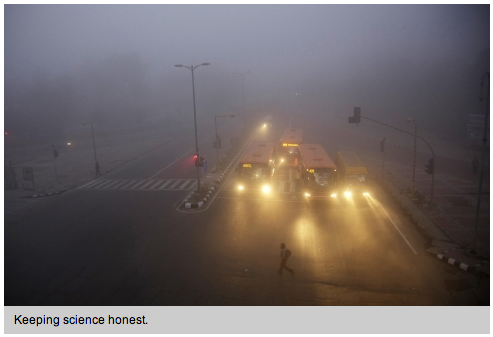 More climate scepticism from the mainstream …

People would be idiotic not to question climate science

The debate over climate change and global warming shows no sign of losing its intensity. Those that disagree with the view that man’s activities are contributing to global warming are branded as right wing, in the pockets of business, Fox News junkies, on the take from vested interests and a lot more. Only idiots we are told deny or are sceptical of “science.” Yet the scientific method thrives and moves forward on scepticism.

It is true that science and its discoveries have been a powerful engine of growth. But its not all been one way. The bedrock of scientific research is that the same experiments yield the same results no matter who does them. However scientists at the biotech company Amgen, a few years ago attempted to replicate 53 cancer-related studies, but were only able to replicate six. Bayer HealthCare had a similar experience in only being able to reproduce a quarter of the result of 67 studies.

We are frequently told that we should believe that global warming science is irrefutable because the UN Inter Governmental Panel on Climate Change report is supposed to be based on the work of 9,136 scientists and their 2,239 peer reviewed articles. However it’s worth bearing in mind that the IPCC is not a scientific organisation. Its charter restricts it to looking for human induced global warming, rather than what occurs as a result of natural climate forces. In practice it is not interested in views which do not support the influence of human activity, specifically carbon dioxide.

However it is not unheard of in the past for the scientific consensus to be wrong. Tom Quirk, a former research physicist and a member of the Australian Climate Science Coalition, notes that for many years it was received medical opinion that “ulcers were caused by stress, spicy foods, and too much acid.”

Subsequently two Western Australians Barry Marshall and Robin Warren proved that they were mostly caused by a bacterium and were better treated by antibiotics and not by surgery and drugs. The pair were awarded the Nobel Prize for their efforts but not before enduring criticism that they were peddling nonsense.

There are parallels with global warming with huge vested interests within the science community, finance, politics maintaining that anyone that denies global warming is idiotic. A huge one trillion US dollar industry has grown up around global warming. Making sense of climate is a difficult and highly complex operation. Climate models attempt to replicate, natural variability ocean currents, the intensity of sun cycles, estimate changes in cloud cover, vegetation and the changes brought on snow and ice cover. Then the impact of increasing levels of man-made C02 are combined with this.

However there is considerable disagreement among the scientific community about the efficacy of the models. The models have difficulty in replicating previous temperature let alone forecasting the future. There are a host of issues about the IPCC reports which have been raised by the Inter Academy Council, the world’s premier scientific body, which are critical of the IPCC. Its August 2010 report on the UN’s climate body identifies: political interference, conflicts of interest, bias, claiming certainty in absence of evidence, vague statements not supported by evidence, management problems and so on. Given all this it seems perfectly justified to be at least sceptical about the claims of the IPCC, and the so-called catastrophic consequences of global warming. Indeed if nothing else it is scepticism that has kept science honest. Given the billions of dollars that are being poured into policies on the basis of alarmist climate forecasts people need to be asking a lot of questions about the science.

The Arctic-Ice-Scam seems to be dying a rather ‘quick’ death!

The retention of more sea ice in September 2013 has increased the overall thickness and volume of the ice pack compared to recent years. Antarctic sea ice remains significantly more extensive than average.

Thicker on top, more down under

A fascinating historical account of a journalist’s study into a changing climate.

The author grapples with the notion that varying weather patterns, almost instinctively, solicit a pessimistic influence on a person, as “the writer has never yet met one who was an optimist”. Aware of superstitions hardwired into the human psyche, the author reassures that any record-defying weather prophecy can almost certainly be corrected through historical comparison.

However, armed with “figures to prove it”, the author discovers a distinct climate change occurring in temperature and rainfall that defies his ‘stable climate’ assumptions.

Does the author fall victim to his own climate superstitions? Or is there really man-made climate change at play, brought about by human settlement and the development of land for agriculture?

The author does however remain his own ‘optimist’, noting that whilst the summer months are getting warmer, “our winters are gradually being robbed of their terrors”. As well, the prospect of increased rains could mean, “millions in hard solid cash”, and with less burden on Government, “reduced taxation will follow.” !

IS OUR CLIMATE CHANGING?

Temperature Increasing; So is Rainfall

ROBBING WINTER OF ITS TERRORS

CONCERNING weather, it may be accepted as an axiom that there are conservatives and ultra-conservatives, and meteorologists, too. During an acquaintance extending over many years with the last-named gentry the writer has never yet met one who was an optimist. Enthuse as you will over popular literature dealing with the various cycles and other schemes under which it can be shown conclusively that there is no such thing as a problem where weather is concerned, the meteorologist will turn you down cold.

Even Mr. Bromley, amiable prophet though he be, is no exception to the rule. Go to him filled with hope after it has been raining hard for endless days and ask for sympathy and the verification of a new record established. You will not get it. He will refer to some bygone day when it rained .000934 points of an inch or more, or when the mercury was all out over the last fractional point of the scale.

A distinct change, however, in the Australian climate which even Mr. Bromley cannot refute has been discovered. There are figures to prove it, and those figures are supplied by Mr. Bromley’s department.

Interviewed this week one prominent Adelaide man said the public did not understand what rain meant to the State. It was not only a case of providing water — it was a case of millions in hard solid cash. If that be so, then one of the problems of the Federal Government has gone, and reduced taxation will follow as a natural course.

Two things have happened to the Australian climate — it is getting warmer and the average rainfall is increasing.

Just what has brought the change about it is hard to say, but no doubt there is a reason. Knibbs, in one of his early year books, places it on record that settlement and the treatment of land have a distinct effect on local conditions. Sydney, for example, showed a rise of two-tenths of a degree during the past twenty years, a change which he attributed to the great growth of residential and manufacturing buildings within the city and in the surrounding suburbs during that period. Again, the low-lying lands of the north coast of New South Wales, formerly free from frost, now have annual visitations. The theory is that with the cutting away of the trees the cold air, has an unimpeded flow to the low lands.

Irrigation also has its influence on climate. In “Seas and Skies” the Hon. Ralph Abercromby says, “Before the Suez Canal was made the desert through which it was cut was said to be rainless. Now, since the Bitter Lakes have been filled with water, rain falls on an average eight days in the year at Ismailia.”

Again, in “American Weather,” Gen. A. W. Grerly remarks on the subject of heat waves, “It seems possible that the frequency and intensity of such visitations have diminished on the Pacific Coast, since Tennant’s record of hot days (classing as such those on which the temperature rose to 80 degrees, or above, at San Francisco) indicates that their actual number has very materially diminished since 1839. For seven years prior to 1839 such days averaged thirteen yearly, and since that time up to 1871 the average number is but four. The immense quantity of land placed under irrigation and the vast increase in vegetation are obvious reasons why there should be some diminution in this respect.

Whatever may have brought the change, the fact remains that the figures show it. A comparison of the mean summer temperatures of the capital cities reveals that it is now higher in each of them, the statistics being: —

Not only is it getting warmer during the summer months, but with the exception of Hobart, where it is a shade cooler, our winters are gradually being robbed of their terrors. Here are the figures showing the mean winter temperatures of the capital cities: —

The man on the street will, after reading this, jump to the conclusion that more heat means lees rain. But once again they show that this is not so. As a matter of fact, we are now getting more rain than we were previously. Again taking the capital cities, this is seen to be a fact in the case of all except Sydney, which shows a slight falling off. The figures are: —

AT the time of this ‘abrupt’, ‘unprecedented’ Climate Change, carbon  pollution was at 320 parts per million.