Shock News : The Philippines Have Always Had Super Typhoons

“We are on the verge of a global transformation.
All we need is the right major crisis…”
– David Rockefeller,
Club of Rome executive member

The alarmist Huffington Post, ever quick to blame humans for Typhoon Haiyan, or any *weather* event, forgot to read the latest findings from the IPCC. Their latest climate report AR5, concedes a “Low Confidence” link between extreme weather and man-made greenhouse gas emissions.

Official IPCC Words from SREX report released 2012 : ”We Do Not Know If The Climate Is Becoming More Extreme“

HuffPo’s human causation conclusion is not supported by IPCC AR5 or SREX.

Don’t expect Huffington Post or delegates at the upcoming UN climate propaganda gabfest COP19 to report or discuss the Philippines devastating history of Super Typhoons, with CO² well below 350ppm :

SAN FRANCISCO, Cal., Nov. 27.—The typhoon which swept over the Philippine Islands on Oct. 6 was the cause of one of the worst disasters reported from the Southern Ocean In many years- Thousands of lives were lost, among those who perished being many Europeans, and the damage to property was something appalling.

The difficulty of getting news from the Islands is great at any time, and owing to the remoteness of some of the provinces visited by the hurricane full details of the 1st of November. The steamer Gaelic,  from the Orient to-day, brought letters and papers which contain accounts of the ravages of the tidal wave and the winds. Several towns were swept or blown away. Fully 400 Europeans were drowned, and it is estimated that 6,000 natives perished.

1952 : Philippines Hit By Two Devastating Typhoons In A Week

Posted on November 13, 2013 by stevengoddard 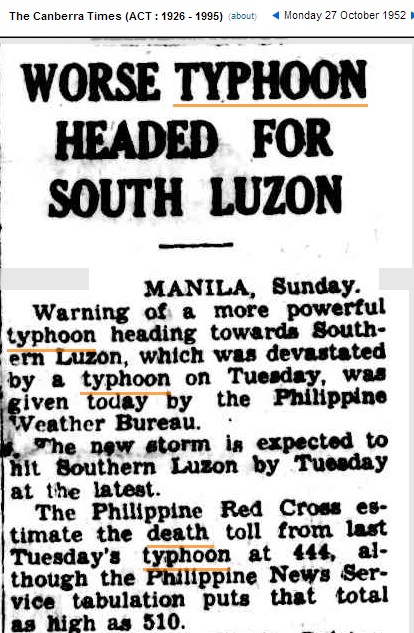 The Philippines government says that the top speed of Haiyan was 146 MPH.

Dec 16, 1900
“A terrific cyclone was encountered on December 16, when the vessel was to the eastward of the Philippines. The tempest raged for three days, and the vessel was absolutely uncontrollable.”
trove.nla.gov.au/ndp/del/article/14356766

12 May 1913
TYPHOON IN PHILIPPINES.FIFTY-EIGHT LIVES LOST.EXTENSIVE DAMAGE.
The typhoon was the most severe experienced for eight years.
trove.nla.gov.au/ndp/del/article/90934517

28 Nov 1928
The Philippines have been swept by a typhoon described as the worst known for years.
trove.nla.gov.au/ndp/del/article/29319617

H/t to Real Science Shock News : The Philippines Have Always Had Super Typhoons.

People have been imagining that the climate is changing, exaggerating every weather event, getting widespread press coverage, and blaming it on man – for as long as there have been newspapers.

THREE consecutive years of drought, while they have stimulated the inventive resources of practical agriculturists, have had the natural effect of calling forth a plentiful crop of speculation from weather prophets and projectors, and half-instructed meteorologists, and all the philosophic tribe of Laputa in general, to whom the periodical press now affords such fatal facilities.

We have often noticed that in the tabular statements of those compilers of weather records who write to the Times, useful and welcome as their communications are, every season is sure to be “extraordinary,” almost every month one of the driest or wettest, or windiest, coldest or hottest, ever known. Much observation, which ought to correct a tendency to exaggerate, seems in some minds to have rather a tendency to increase it.  And many seem now to regard three dry hot years in succession as betokening some general change of climate, as if it was not perfectly certain, in the wide range of the table of what we call chances, that with our existing conditions of climate such a combination must every now and then recur. We know an ingenious theorist who would fain persuade us that a cycle of six hundred unfavorable years has  just reached its termination, and that English agriculturists, who left off making wine about A.D. 1250 because their grapes ceased to ripen,  will soon be making it again, and continue to do so for an equivalent number of centuries.  Others speculating quite as conjecturally and even more absurdly, seem to attribute the impending change of climate – of which they assume the reality – to the operation of men.

A HISTORY OF CLIMATE AND RELIGION :

Deep within human nature there are certain types of people who yearn for catastrophe, they yearn to have significance in their lives believing that theirs is the time when the chickens are coming home to roost and everything is going to go tits up.

Climate skeptics were seen as witch collaborators during the 16th century.

Editorial : Sacrifice Is Needed To Control The Climate

The latest research from our top scientists tells us that the only way to control the climate is through sacrifice.

In the past, people foolishly believed that the Sun influenced the climate – but science has come a long way in the last 500 years and we need to listen to the experts.

“The common enemy of humanity is man.
In searching for a new enemy to unite us, we came up
with the idea that pollution, the threat of global warming,
water shortages, famine and the like would fit the bill. All these
dangers are caused by human intervention, and it is only through
changed attitudes and behavior that they can be overcome.
The real enemy then, is humanity itself.”
– Club of Rome,
premier environmental think-tank,
consultants to the United Nations

“Effective execution of Agenda 21 will require a profound
reorientation of all human society, unlike anything the world
has ever experienced a major shift in the priorities of both
governments and individuals and an unprecedented
redeployment of human and financial resources. This shift
will demand that a concern for the environmental consequences
of every human action be integrated into individual and
collective decision-making at every level.“
– UN Agenda 21

“Land…cannot be treated as an ordinary asset, controlled by individuals and subject to the pressures and inefficiencies of the market. Private land ownership is also a principle instrument of accumulation and concentration of wealth, therefore contributes to social injustice.” Report of the UN conference on Human Habitat Settlements 1976.

The United Nations, in line with their Malthusian beliefs, assume that human beings are poor stewards of land, and that “Private land ownership is also a principle instrument of accumulation and concentration of wealth, therefore contributes to social injustice.”

“In a nutshell, the plan calls for governments to take control of all land use and not leave any of the decision making in the hands of private property owners. It is assumed that people are not good stewards of their land and the government will do a better job if they are in control. Individual rights in general are to give way to the needs of communities as determined by the governing body. Moreover, people should be rounded up off the land and packed into human settlements, or islands of human habitation, close to employment centres and transportation.

According to the misanthropic views of the Club of Rome, premier environmental and de-population think-tank and consultants to the United Nations, “The Earth has cancer and the cancer is Man.”

How to deal with this “cancer” ? 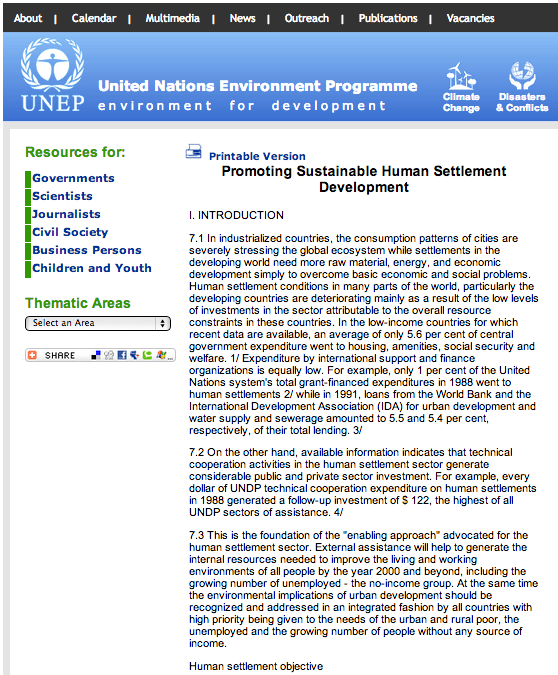 The UN didn’t like people reading the above document titled “Agenda 21 – Promoting Sustainable Human Settlement Development – United Nations Environment Programme (UNEP)“, so they deleted it from the record :

“In Searching For A New Enemy To Unite Us, We Came Up With The Threat Of Global Warming”