“This planet is on course for a catastrophe.
The existence of Life itself is at stake.”
– Dr Tim Flannery,
Climate Council

Another round of government-funded PR went out a couple of weeks ago, across the obedient Pravda-media. It told us about another meaningless “record” that was probably not a record, and wouldn’t tell us whether man-made warming was the cause, even if it was. Not a single journalist had the wherewithal, nous or intellectual honesty to search the Internet looking for a different point of view. Though, in their defense, how could they have guessed that Prof David Karoly wouldn’t know about the UAH satellite program to measure temperatures? (It has only been running since 1979.)

This below, are the 12 month averages over Australia by satellite. Graphed at Kens Kingdom by Ken Stewart, with no doctorate in climatology and no government funds.

In the troposphere over Australia it was a hot year but not a record.

For the third time this year we’ve been hit with claims of a “hottest ever” record that doesn’t tell us anything about the climate, but does reveal a lot about the sick state of government funded science, corrupted, decrepit, and so far from being scientific it might as well be run by Greenpeace.  If the government stopped funding climate science entirely, climate research might speed up.

The “hottest” headlines are science-marketing

The need for constant “record” headlines (despite the conflicting data) is the mark of an effective lobby group, but it isn’t the mark of careful impartial scientist.

The satellite data shows it was not a record

There are thousands of measurements coming in from satellites that criss cross the nation day and night covering every corner of the land. This data came out within a few days of the propaganda pieces published all over the country, but the “scientists” at The University of Melbourne couldn’t wait, indeed, they were in such a rush you’d think there was an election on, and dare I say, that getting out an inaccurate message before the vote, was more important than waiting a few days to get the science right?

The satellite measured TLT (meaning Tropospheric Lower Temperature) more accurately shows what the bulk atmosphere above the Australian land-mass is doing – which is the quantity that is most directly related to greenhouse gas impacts. Indeed the models tell us that the rate of warming should be larger in the mid to upper troposphere than at the surface. In other words, if CO2 caused the warming, it would turn up in these satellite records before we saw it in the surface charts.

Some of the propaganda

The Conversation includes this gem of reasoning from David Karoly:

“However, attributing a single event or a record to human activities isn’t easy. But last year Hurricane Sandy put the spotlight on climate change and extreme weather.”

In other words, long trends don’t matter, ignore decadal averages, the current drought in hurricanes, forget global compilations of energy that show that storms are not getting worse, throw all your history out the window. If there is ever a bad storm anywhere in the world, it is our fault. Straight from the playbook of the witchdoctors of neolithic times. Send Karoly some conch shells.

Donate to connect-a-scientist to the World Wide Web

I ask again, as I did in June, if the satellites showed that the last Australian year was a record hot temperature, would Sophie Lewis and David Karoly have left that data off the paper, and entirely out of their calculations, and removed all mention of them from their press releases? (Climatism Emboldened)

As I said then:

The peer reviewed, comprehensive, [hottest ever] Lewis and Karoly paper does not contain the words “satellite”,  or “UAH”. Lewis and Karoly apparently do not know about the UAH satellite program yet, otherwise they surely would have emailed John Christy or Roy Spencer (as we did) to ask for the data. We can only hope that they get enough government support, more funding, and better education in future so that they may discover what unpaid volunteers figured out on the Internet for free 3 months ago. Frankly it is shameful that the Australian Research Council (ARC) Centre of Excellence for Climate System Science is not connected to the world wide web and has not trained staff to use “google”.

Since the Uni of Melbourne don’t seem to have web access, perhaps someone can do them a favor and send them this in snail-mail so they can finally find out about the University of Huntsville Alabama? I’m sure John Christy would be happy to post them a printout of the UAH Australian data. I can relay messages if Prof Karoly would like.

Luckily my email goes all the way to America.

Thanks to Ken, Ed, Chris, and all the independent BOM audit team and to John Christy for the data.

This guy rips the Bureau Of Meteorology “Hottest Ever Year”  false claims to shreds: 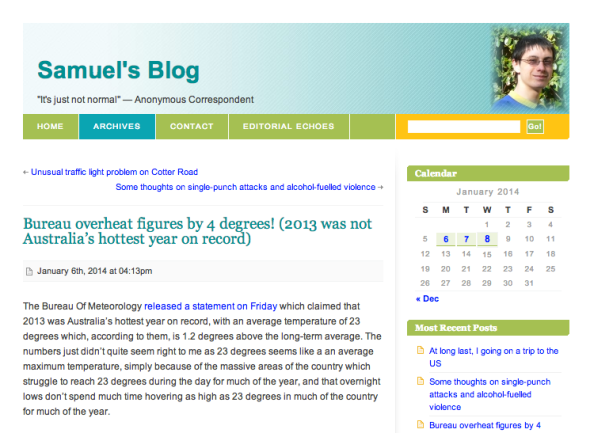 Bureau overheat figures by 4 degrees! (2013 was not Australia’s hottest year on record)

The Bureau Of Meteorology released a statement on Friday which claimed that 2013 was Australia’s hottest year on record, with an average temperature of 23 degrees which, according to them, is 1.2 degrees above the long-term average. The numbers just didn’t quite seem right to me as 23 degrees seems like a an average maximum temperature, simply because of the massive areas of the country which struggle to reach 23 degrees during the day for much of the year, and that overnight lows don’t spend much time hovering as high as 23 degrees in much of the country for much of the year. Continue Reading »