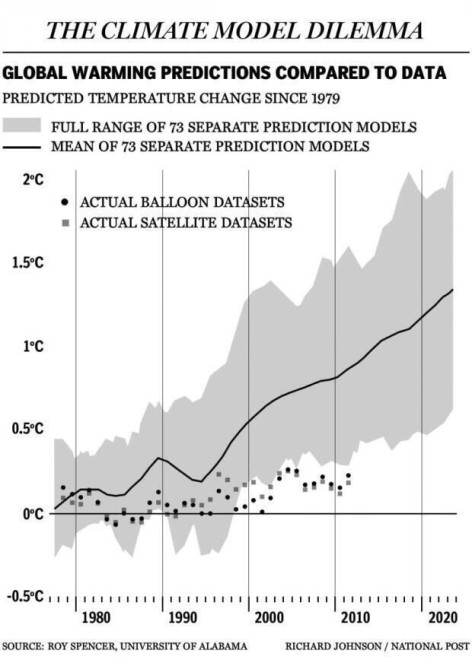 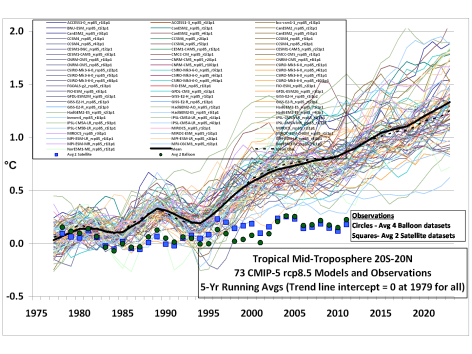 In my opinion, the day of reckoning has arrived. The modellers and the IPCC have willingly ignored the evidence for low climate sensitivity for many years, despite the fact that some of us have shown that simply confusing cause and effect when examining cloud and temperature variations can totally mislead you on cloud feedbacks (e.g. Spencer & Braswell, 2010). The discrepancy between models and observations is not a new issue…just one that is becoming more glaring over time.

It will be interesting to see how all of this plays out in the coming years. I frankly don’t see how the IPCC can keep claiming that the models are “not inconsistent with” the observations. Any sane person can see otherwise.

If the observations in the above graph were on the UPPER (warm) side of the models, do you really believe the modelers would not be falling all over themselves to see how much additional surface warming they could get their models to produce?

Hundreds of millions of dollars that have gone into the expensive climate modelling enterprise has all but destroyed governmental funding of research into natural sources of climate change. For years the modelers have maintained that there is no such thing as natural climate change…yet they now, ironically, have to invoke natural climate forces to explain why surface warming has essentially stopped in the last 15 years!

Forgive me if I sound frustrated, but we scientists who still believe that climate change can also be naturally forced have been virtually cut out of funding and publication by the ‘humans-cause-everything-bad-that-happens’ juggernaut. The public who funds their work will not stand for their wilful blindness much longer. Keep reading »

“Global warming is just HALF what we said” : World’s top climate scientists admit computers got the effects of greenhouse gases wrong | Mail Online : 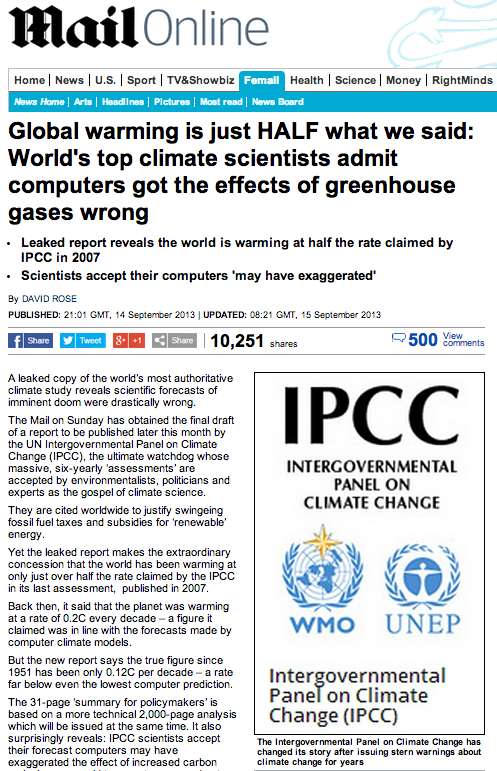 We got it wrong on warming, says IPCC

THE Intergovernmental Panel on Climate Change’s latest assessment reportedly admits its computer drastically overestimated rising temperatures, and over the past 60 years the world has in fact been warming at half the rate claimed in the previous IPCC report in 2007.

More importantly, according to reports in British and US media, the draft report appears to suggest global temperatures were less sensitive to rising levels of atmospheric carbon dioxide than was previously thought.

The 2007 assessment report said the planet was warming at a rate of 0.2C every decade, but according to Britain’s The Daily Mail the draft update report says the true figure since 1951 has been 0.12C.

Last week, the IPCC was forced to deny it was locked in crisis talks as reports intensified that scientists were preparing to revise down the speed at which climate change is happening and its likely impact.

It is believed the IPCC draft report will still conclude there is now greater confidence that climate change is real, humans are having a major impact and that the world will continue to warm catastrophically unless drastic action is taken to curb greenhouse gas emissions.

The impacts would include big rises in the sea level, floods, droughts and the disappearance of the Arctic icecap.

But claimed contradictions in the report have led to calls for the IPCC report process to be scrapped.

Professor Judith Curry, head of climate science at the Georgia Institute of Technology in Atlanta, told The Daily Mail the leaked summary showed “the science is clearly not settled, and is in a state of flux”. Keep reading »

Professor Bjorn Lomborg says man is warming the planet, but the evidence now shows global warming theorists have vastly exaggerated the problem. The latest Intergovernmental Panel on Climate Change report will grudgingly dial down the alarm: 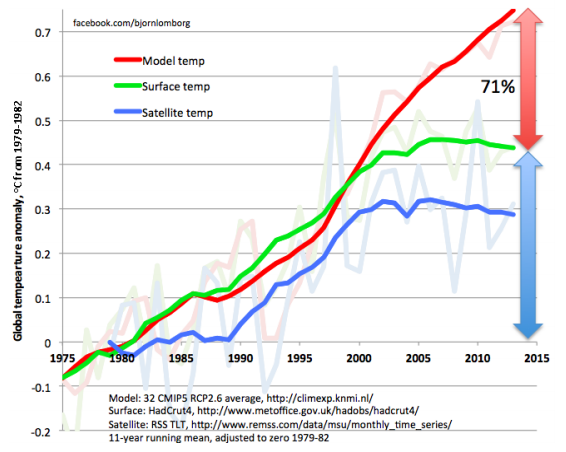 The IPCC admits that “models do not generally reproduce the observed reduction in the surface warming trend over the last 10–15 years.” This matters, because if the models overshoot for recent decades, the century-long forecasts are open to doubt.

CommentsView/Create comment on this paragraph Compared to the actual temperature rise since 1980, the average of 32 top climate models (the so-called CMIP5) overestimates it by 71-159% (see graph). A new Nature Climate Change study shows that the prevailing climate models produced estimates that overshot the temperature rise over the last 15 years by more than 300%. Keep reading »

On September 23 through 26, representatives of the world’s Environment Ministries will meet in Stockholm to agree on the final draft of a key portion of the latest Intergovernmental Panel on Climate Change (IPCC) Summary for Policymakers gospel which is expected, once again, to keep the political climate cauldron steaming.

Will they maturely discuss the real mystery in climate science, that is the ever widening temperature divergence between what the climate models tell us and what observed reality shows? Or will the fear mongers continue their alarmist propaganda crusade, in order to implement draconian climate policy to attempt to stop a planet heating that hasn’t heated in 17 years, and try to change a climate that’s been changing by itself for 4.5 billion years?

The IPCC’s continued biased support for CAGW (catastrophic anthropogenic global warming) nonsense is designed to support their crooked ideology to extend the powers of government, to raise taxes, to weaken the capitalist system, to curtail personal freedom and in the IPCC’s own words to “redistribute the world’s income through climate policy“.

See also “Andy’s Rant” –  97.4% of climate predictions made in 1990’s overestimated the amount of warming

EU policy on climate change is right even if science was wrong, says commissioner 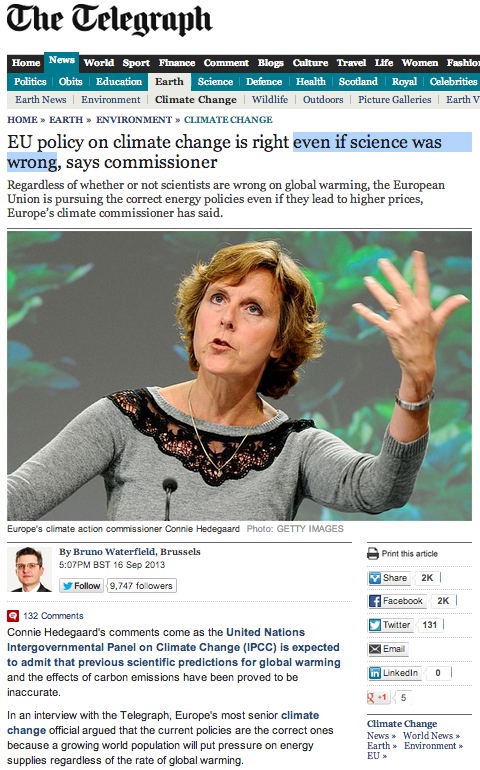 EU policy on climate change is right even if science was wrong, says commissioner – Telegraph

“Say that 30 years from now, science came back and said, ‘wow, we were mistaken then now we have some new information so we think it is something else.’ – Connie Hedegaard, Europe’s climate commissioner 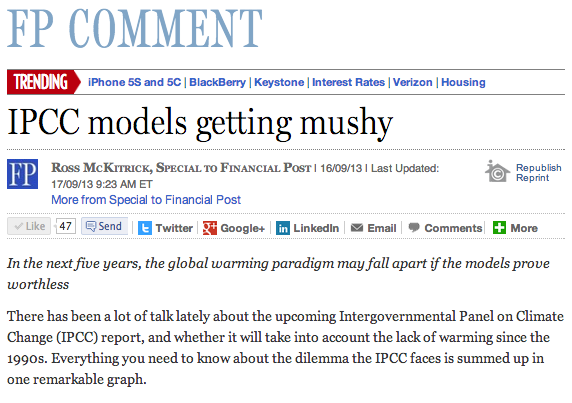 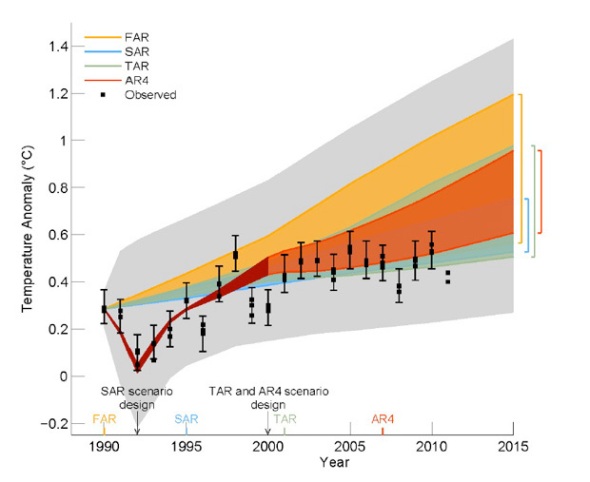 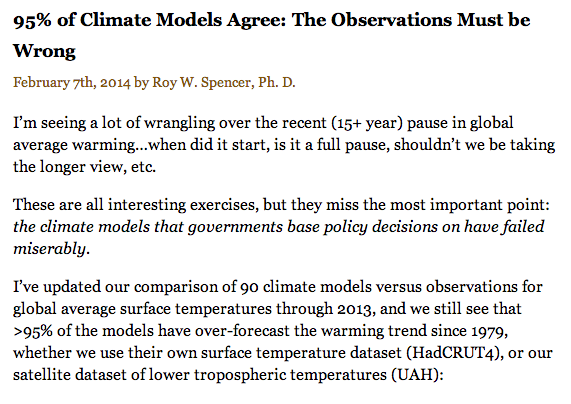 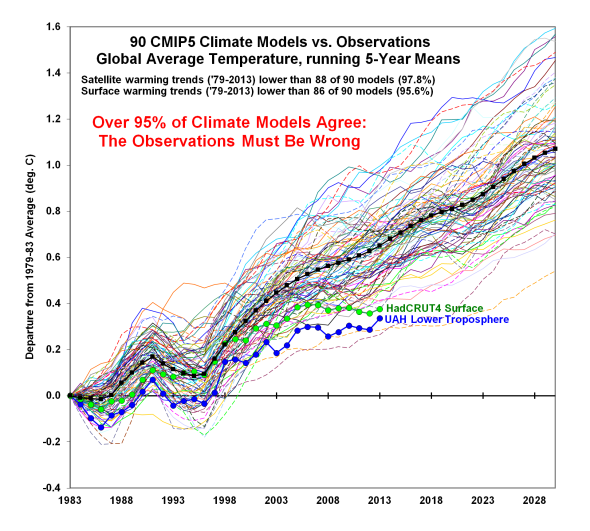